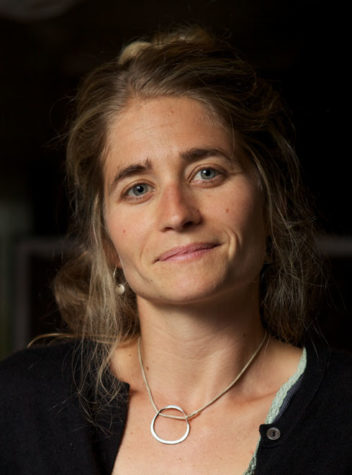 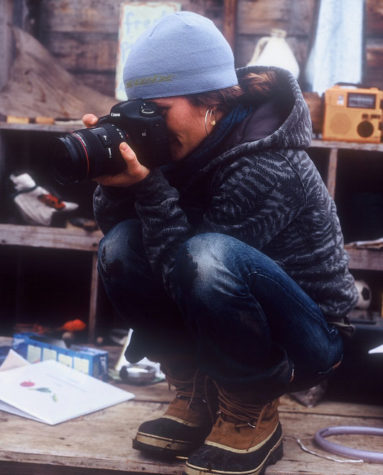 Where did you grow up?
I grew up on North Haven Island. There are only 350 people who live on the island year-round and it’s 12 miles off the coast so it’s a pretty remote and small community. There’s a kindergarten through twelfth-grade public school there, which for a small town is great because it allows for families to stay on island with children. The size of the school allowed for very place-based learning, which for a hands-on learner like myself was a real positive.

Do you still live on North Haven?
Three years ago I built a house on the island. House is a liberal word—it’s really a cabin. It’s tiny, about 400 square feet, off the grid and my year round home. But I moved away and then came back to the island. I went to college in Oregon and lived there for about five years. I loved the Pacific Northwest, but I knew I wanted to get involved in film so I moved to New York City. I thought that would be the best place to get a job and just get thrown into it. I started working for a social documentary company called Big Mouth Films. It was this great group of folks tackling all kinds of different films on many different levels. Before I got there, one of their films got an innocent man off of death row. One of the great things about that company is that they were doing things for National Geographic and A&E and commercial works, but they were also putting a ton of their personal energy into independent projects and were very socially driven, which I gravitated to.

Why the interest in filmmaking?
Film is a way to combine a lot of things that have always interested me. I’ve always been fascinated by oral history, which I think comes from growing up in a small town in Maine and being intimately familiar with people from other generations. And I’ve always been interested in social justice issues. Film has a unique ability to appeal to broad audiences in an emotional way, and when it’s done well it can inspire people to take meaningful action in their own lives. Most importantly, though, it’s all about good characters and good stories. My interest in filmmaking really comes from an interest in the people I meet, and using film as an outlet to share their stories with the world.

How has your career developed since moving back to Maine?
In 2009, my now brother-in-law Jason Mann and I started Pull-Start Pictures. We began with a big project for Maine Farmland Trust and moved on from there. We’ve also done work for organizations like Penobscot East Resource Center, the New York Times, the Gates Foundation, and Small Planet Fund.

What sparked the idea for your full-length independent documentary Betting The Farm?
Jason and I met these farmers in Edmunds near Eastport who told us that their national milk producer, HP Hood, was dropping them and others. There was no one else who would pick up their milk, so essentially these farmers and others were faced with having to band together or go out of business. It just seemed like an interesting proposition. Can little farms really do this? What used to be done all the time 70 years ago is not necessarily possible anymore. That was October of 2009 and we proceeded to follow them for the next three years. MOO Milk—Maine’s Own Organic Milk—launched in January of 2010. At that time, we picked three Maine farm families to check in with regularly. We would go home with these folks and sleep on their couch and really just wait for something to unfold. It’s a vérité film, which means you’re just sort of a fly on the wall, so patience is part of the process and essential to the film.

So you got to know these people really well!
Jason and I are very close to all of them. We had to put so much trust in them and they had to put so much trust in us. We documented 300 hours of their lives. Moments when they’re fighting with their partners or saying things at board meetings that they wish they hadn’t said or their kids are going bonkers and they’re exhausted. I mean, whatever it is, they had to trust that we were there to represent them in a way that will help the general viewer have empathy and understand the story on a variety of levels. It’s not just about milk. It’s not just about the landscape or about how we like to live in Maine. It’s about representing all of the different parts of somebody’s normal, ordinary life that has extraordinary pieces to it.

How is MOO Milk doing now?
There were highs and lows and there were near crashes and burns, but they stayed afloat for a variety of different reasons. When we stopped filming, it became apparent to us that this milk company was probably going to survive. At this point in time, the farmers get paid regularly and consumers are starting to find out who they are. You know, there’s something to be said for farmers running their own company. It’s a really hard way to make a living, and yet it has huge implications for all of us. If these folks can succeed, why not other others? In the end, it’s up to us as consumers to make these small businesses successful.