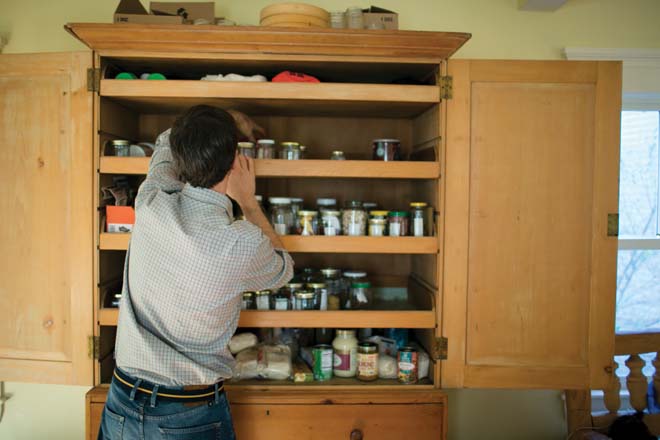 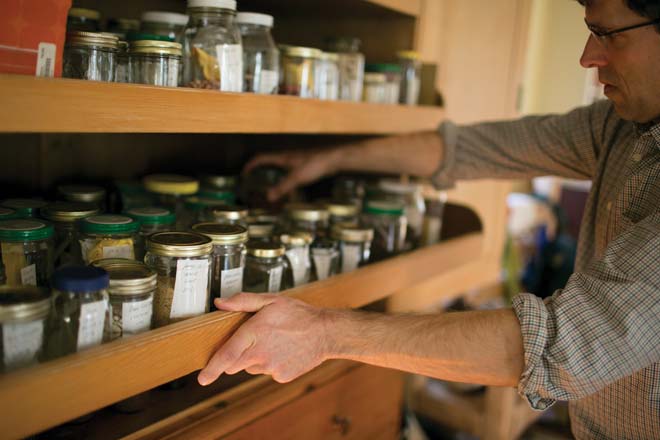 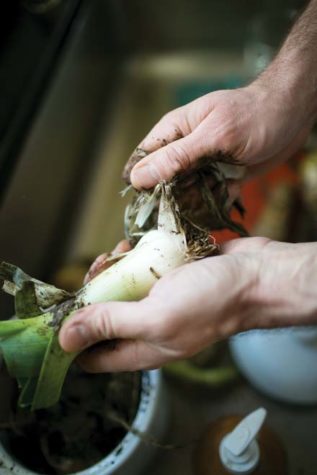 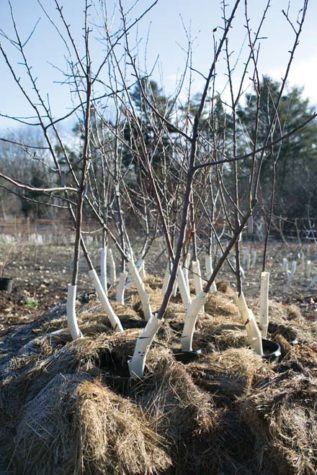 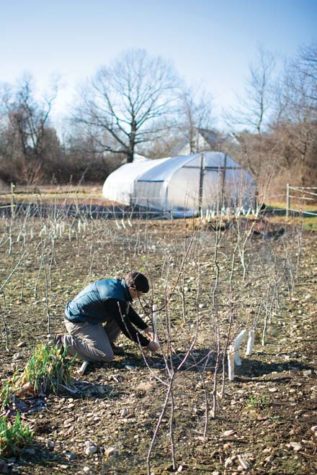 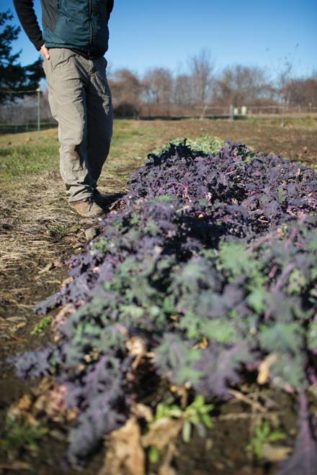 A row of kale at Rodney Voisines Apple Tree Hill farm in Cape Elizabeth. Buchanan leases land from Voisine and sells at the Portland Farmers Market under his Old Ocean House Farms label. 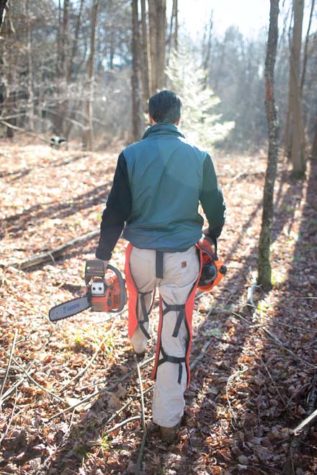 Buchanan building hiking and skiing trains on his land in Pownal. 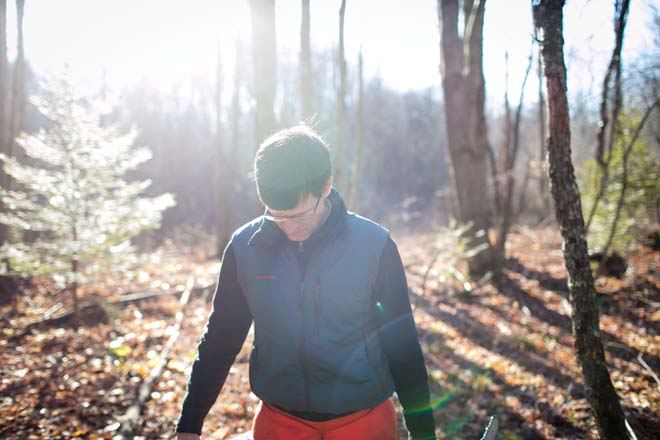 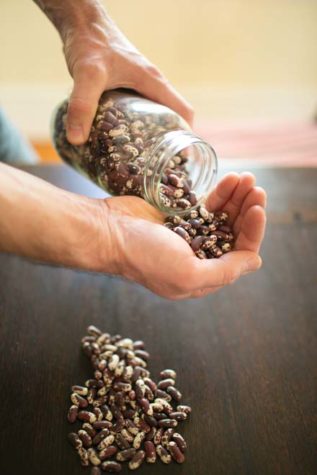 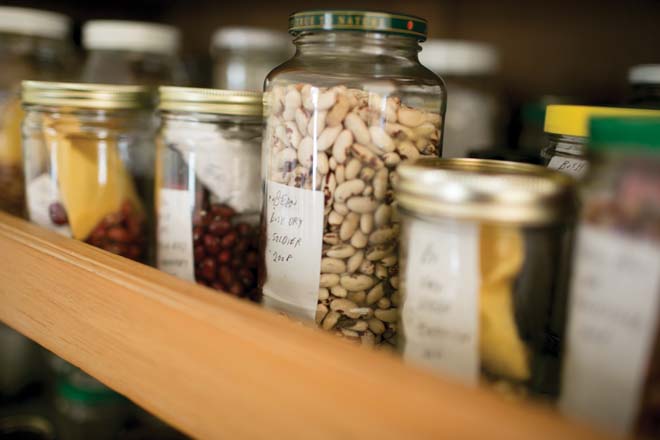 Buchanans collection of bean seeds, stored in a cabinet at his Portland home. In the foreground is Soldier, a seventeenthcentury variety long popular in Maine. 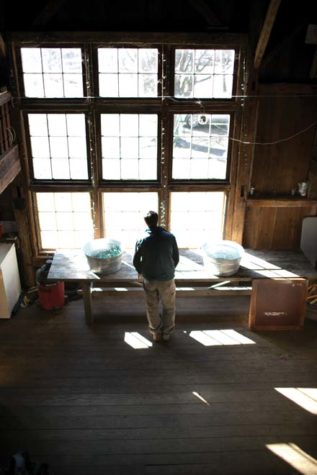 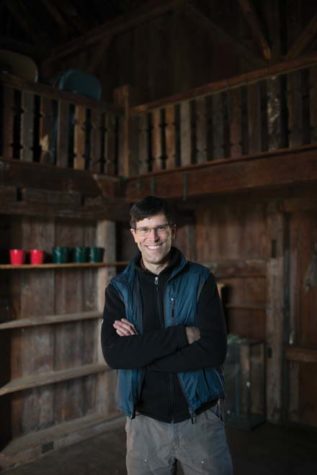 Buchanan has grown for years at a variety of sites around Portland, borrowing tools and equipment to collect heritage foods.

David Buchanan’s Quest to Bring Forgotten Foods to Our Tables

A word of advice: If you ever happen to receive an invitation to eat dinner at David Buchanan and Karla Hyde’s house, accept it. Go not just for the food, which will no doubt be extraordinary, but for the stories you’ll hear about the food, for the intelligent way Buchanan talks about what lands on our plates, and how, and why, and according to which whims of history.

Give him half an hour and you’ll never see an apple the same way again.

Once, Maine farmers and gardeners grew at least 400 varieties of apples. Today we’re lucky if we find half a dozen on the shelves. Commercial markets typically winnow out fruits that have specialty uses like baking or cider, as well as those that don’t match popular expectations for what an apple should look like, or that don’t store for long periods, hold up under rough handling, or adapt to a wide range of growing conditions. The search for all-purpose varieties all too often comes at the expense of taste and tradition, and this has contributed to a steep decline in regional fruit growing over the past 20 years. New England orchards that produce commonly available apples like Macintoshes and Cortlands have a tough time competing with imports from more favorable growing regions. The result? Enter a grocery store today and you’re likely to find only a few standard varieties with less-than-mindblowing flavor. For David Buchanan, this is a real shame.

Buchanan grew up in the North Shore of Massachusetts and earned a bachelor’s degree from Princeton in 1988 and a master’s degree in landscape design from the Conway School in 2000. He spent several formative years farming and living off the grid in Washington state. But the isolation got to him, and he missed urban life on the East Coast. In 1996, he moved to Boston and worked as a writer and fundraiser for the Peabody Essex Museum. In 2001 he came to Portland, lured by the walkability of the city and its proximity to the ocean and mountains. Here, along with his fiancee Karla Hyde (who works at the Maine Department of Environmental Protection—and who loves to cook), he has set down roots at last.

These days, Buchanan is interested in telling old, nearly forgotten stories about what we eat—and making sure these stories are passed on. He grows all sorts of fruits and vegetables, preserves seeds, grafts trees, and basically does whatever a person can do with an orchard and gardens. His first book, Taste, Memory: Forgotten Foods, Lost Flavors, and Why They Matter, just published by Chelsea Green, is a testament to both Buchanan’s storytelling ability and his passion for biodiversity. You don’t need to be a farmer or a foodie to fall under the spell of this book. And you don’t need to be a horticulturist to see that Buchanan is accomplishing something remarkable in Maine.

Let’s start with appearances. Buchanan is clean. That may sound odd, but I’ll be honest: I expected to meet a grittier-looking person for coffee at Portland’s Local Sprouts. I expected dirtier nails, hippier garb, more beard—more hair in general. But Buchanan is clean-cut, tidy, and bespectacled. He’s what people call professional looking, with the mild, well-mannered demeanor useful for convincing City Hall to accept new proposals. My overall impression is one of passionate, pensive, ruthless self-scrutiny. I sense a man for whom every choice gets run through the filter of his ethical mind, perhaps to a burden

some point. Buchanan genuinely struggles with the implications of living responsibly, growing food, and and caring for often overlooked things, like the seeds of older Maine cucumbers and rutabagas. The happiness he has recently found—the joy of seeing various dreams come together—is one he worked hard to achieve.

What is Buchanan thinking so hard about? In layman’s terms, Buchanan is a person who studies and grows heritage—also known as heirloom—foods. His goal is to preserve fruits and vegetables that would otherwise be abandoned by time, and to experiment with new varieties bred in the best interest of farmers and consumers. He loves forgotten flavors, celebrates the ever-increasing diversity of our food choices, and writes about the importance of working with these foods to continue breeding new regionally adapted varieties.

If Buchanan’s work seems like a quaint foodie hobby or pastoral fantasy, look harder. Buchanan is keenly aware of the economic and environmental benefits of agricultural diversity, and is trying (with his friends and colleagues) to bring back “endangered products that have real economic viability and commercial potential.” He writes:

If those of us who can afford to spend a little more would buy locally adapted apples that require fewer sprays, or heirloom tomatoes that keep diversity alive, in the process we could help raise wages and ensure better health for those laboring in the field. By all means let’s support consumers who can’t afford to eat well, but let’s also get our stories straight. All too often cheap food comes at the expense of workers and the environment, and chasing bargains sends everyone on a downward spiral as workers in turn can’t afford to eat anything of better quality. A relentless march to the bottom in food prices has far-reaching consequences that are invisible to many of us.

Taste, Memory addresses the many ways Buchanan is trying to understand and correct this problem on a local level. It chronicles Buchanan’s path as Slow Food pioneer (he helped found and then led the chapter in Portland, Maine in 2005), “fruit explorer” (we see him wading through wild brambles to locate various mythic berries), local gardener, farmers’ market seller, seed saver, cider maker, and on and on.

What I admire about the book is that it’s the farthest thing from doctrinaire or holier-than-thou. It teaches, yes, but it’s not dogmatic. Buchanan acknowledges what he doesn’t know, and lets the reader into his search for solutions. We learn along with him, see him weighing decisions, feel his hunger (literally and figuratively). I’m not one for books about food—my cookbooks are dusty, top-shelf dwellers—yet I found this narrative transfixing. Because of course it’s not merely about food; it’s about a person trying to find a meaningful way to live. David Buchanan is a rare person who seems willing to show us this search without pretension or self-aggrandizement. As you read, you see a person trying to figure out a way to live an unisolated urban life, to collaborate with others, and to grow and bring to market heritage foods. In short, he is trying to nurture an urban community in a seemingly old-fashioned way while living an intrinsically modern life within it.

For years, Buchanan gardened in his West End backyard, and leased land from Cape Elizabeth landowners Rodney Voisine and Peter and John Eastman. He sold fruit trees, vegetables, and smoothies at the farmers’ market. He owned very little equipment, relied on friends for labor and land, and committed himself to learning. In fact, the book concludes with Buchanan accepting his current way of life, and considering, someday, maybe, owning and growing on his own land. After several fruitless (as it were) land searches, however, he and Hyde finally decided to put the idea on hold.

In May of 2012, shortly after Buchanan had completed the book, they suddenly found the spot they’d been dreaming about: 115 rolling acres in Pownal, located less than ten minutes from L.L.Bean in downtown Freeport. The book ends when this part begins.

What, precisely, is beginning in Pownal?

I meet again with Buchanan on a frosty day in December, this time on his newly acquired land. It doesn’t take much imagination to see how gorgeous this place will be in spring. Wandering with him, I’m struck by his calm—he emanates focused, peaceful excitement. As he walks through fields and woods, he talks about what he hopes to accomplish with this parcel.

“Plans are still in progress for the new farm, but things are happening fast,” Buchanan explains. “About 400 trees in Cape Elizabeth are prepared for transplanting (hundreds of varieties), ground is tilled up, seeds in the cupboard are ready for regeneration, trails are under construction, the barn is being renovated.” What he sees happening in Maine is “a resurgence of interest in collecting and breeding regional foods,” and this land, which he is calling a “conservation center,” is a practical, hands-on way to further this. “I’ll develop my collections of fruit trees, berries, and vegetables, and experiment with them in a small commercial kitchen and licensed farm winery for hard cider.” (Refer to his book for a fascinating discussion of cider.)

“My goal isn’t only to collect plants, but also find ways to make them relevant in the modern world. This means developing products that people want to buy. Although my book promises ‘forgotten foods’ and preservation, I’m equally interested in what we do with this raw material. It’s my hope that regional seed businesses, farms, and gardens will continue to evolve in new directions, and especially that plant breeders will team up with growers and seed savers to develop flavorful new foods well adapted to our land and changing climate.”

He shows me the cider house, the equipment he’s recently acquired (the bare minimum—”I’m not an equipment hoarder”), and the trails he’s groomed for cross-country skiing. He is not entirely sure yet what this place will become, but is willing to wait and see. Might he find opportunities for an agritourism business? Open land to those who want to hold weddings on these sweeping meadows? Offer educational programming for kids? Set up a farm stand? He’s patient. Nothing is off the table.

Buchanan’s mission is both simple and profound: “This is what I believe, and what motivates me to continue my work: that even the smallest garden can express something nearly forgotten, become a pocket of diversity in a world that looks and tastes increasingly the same.”

If you’re invited to eat with David Buchanan and Karla Hyde, say yes. In the meantime, read his book. And trust that good, hard work is happening in Pownal for the benefit of all.