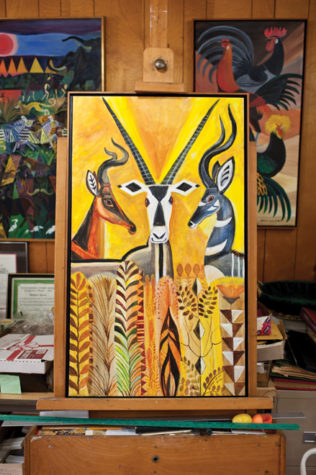 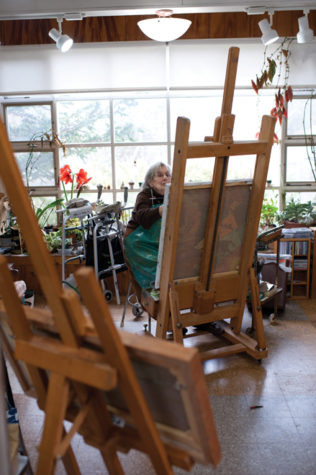 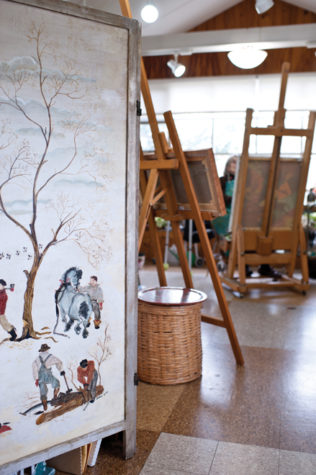 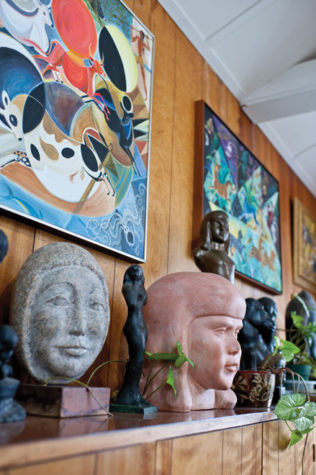 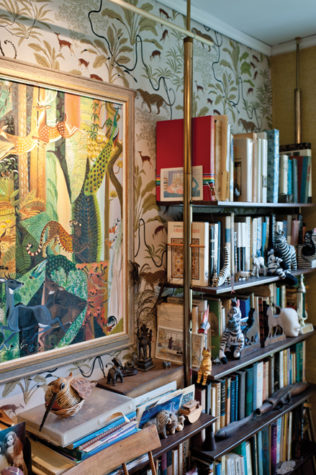 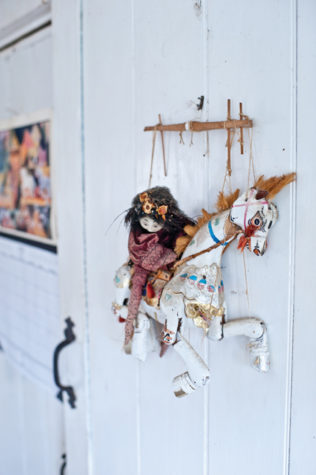 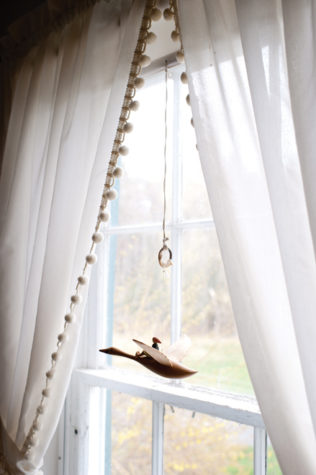 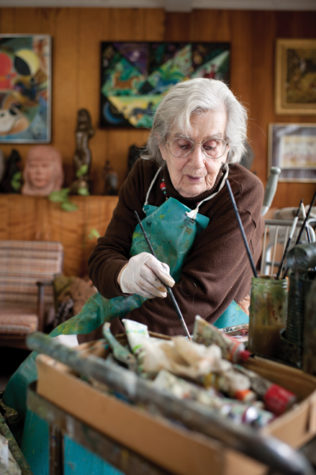 Ipcar collects anything that moves her: antique pottery, wood carvings, folk art, stone carvings. Her farmhouse holds it all in what she calls a great mix of art. 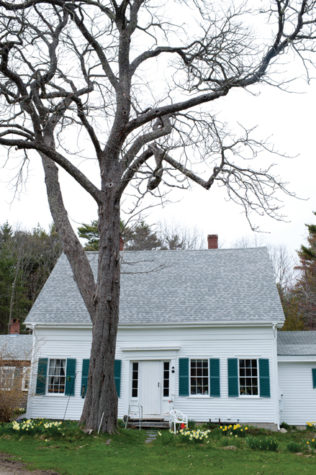 The modest farmhouse with the sturdy bones where Ipcar has lived for 76 years. 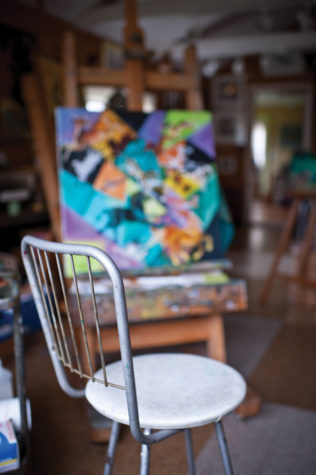 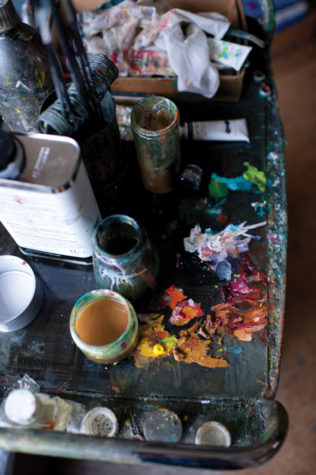 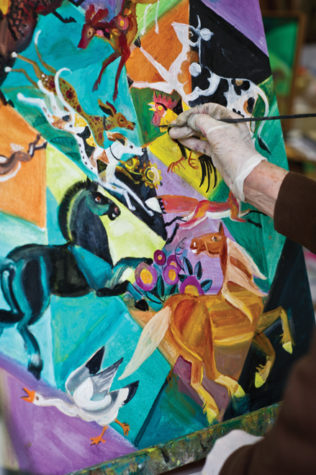 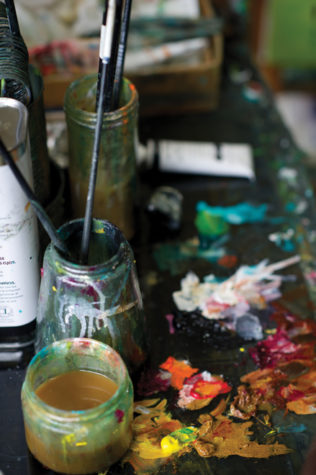 I’ve driven north to find her: taken a right on the Kennebec River, then a left at the falling-down green shed with deer antlers on it, like she told me. Now I’m on a dirt driveway winding and wending its way deep into the forest. Here’s the salt-and-pepper shingled barn where Dahlov Ipcar and her husband, Adolph, tended the art and the animals and their abiding love for almost 70 years. Here’s the low-slung white farmhouse where they raised their two boys. Here’s the hideaway from which Ipcar became one of Maine’s most admired and prolific artists. It’s the last Friday in March. The sky has turned a piercing blue, and the chickadees at Ipcar’s birdfeeder can’t stop talking about it. I knock on the farmhouse door. Knock again. No answer. I poke my head in. Then I step inside.

There she is, standing in her narrow living room, a small woman with steel-gray hair and a striking face. She smiles as if she just saw me hours ago. But we’ve never met.

I’ve heard about her all my life and was raised on her rich canon of children’s books in a farmhouse ten miles up the road. Ipcar moved to Georgetown in 1937 to paint animals—but not the ones you might be thinking of. No rangy moose or black bear for her. No speckled bellied trout.

Here I am in her living room unannounced. I mean, she knew I was coming, but not that I was already inside her house.

“Good,” she says, calm as could be. “I should have told you not to knock. I can’t really hear the knocking anymore. So what everyone does is just come in.”

She leads me slowly to her studio, where the animals live—the ones in her imagination. This is the exotic menagerie that’s made her so famous: blue-striped tigers, pink antelopes, electric-green bats, in paintings with names like Congo Glade and Madagascar Tree that conjure wild safaris under azure skies. The works hang at the Metropolitan Museum and the Whitney and dozens of other galleries and schools and libraries.

But Ipcar has never been to Africa. So where do her animals come from? She points me to her dreams. She says that Picasso dreams arrive at night in harlequin color. “The mind,” she adds, “is a warehouse, and you just have to tap into it.”

She was born in Vermont in 1917, and grew up on art. Her mother, Marguerite Zorach, was a famous textile artist and painter who hung out in Paris with Picasso and Matisse and Gertrude Stein. Paris was also where Marguerite met a man named William Zorach, who would become a renowned sculptor.

William and Marguerite married in 1912 and raised Ipcar and her brother, Tessim, in Greenwich Village with an extended family of bohemian artists. Marguerite painted in the living room while William chiseled stone in the dining room. Ipcar leans back in an old Danish chair and sighs. “I was my parents’ great experiment. They wanted to see what would happen to me if they didn’t interfere. So they never pushed me around.”

Two things her parents did do: encourage Ipcar to paint at an early age, and set her loose on the New York subways, where she made a habit of the Bronx Zoo and the Museum of Natural History. “I relate better to animals. They don’t talk. First you love the animals.”

In 1923 the Zorachs bought the farm in Georgetown. Money was scarce. They spent Maine summers living off the land. There was no running water or electricity. If you wanted flounder for dinner you ran down to the cove and threw your line in. A teacher named Adolph was moonlighting there as a farmhand. This is where the next love story starts.

Ipcar and Adolph rode horses together on the farm. Back in the city, she graduated from high school. She enrolled at Oberlin College, but abandoned it after one semester. Then she married Adolph in 1936, and they tried New York City. But there was too much abstract art. She couldn’t follow it. “It set me off,” she says. All Ipcar wanted to do was get to Maine to paint the animals.

Adolph was happy to go. Before they left, Ipcar sat in on one of his classes, in which he asked his students one question: “If you were a pioneer, what would you bring in your covered wagon?”

They substituted their primitive farmhouse for the wagon and got down to business. “People told me they couldn’t imagine a life of such hardship on our farm,” Ipcar says. “But we always felt romantic about it. It was a good life. We worked hard. A nineteenth century life. I loved it.”

They cut their own wood in the winter, their own ice in the summer. Ipcar maintained huge gardens, and they lived off the yield. Adolph ran a dairy on the land. “He learned everything you need to know about the town,” Ipcar says, “delivering milk into everyone’s kitchens at 5 a.m. Incredible gossip.” It’s been said that no child in Georgetown ever lacked for milk during those years, because of Adolph. Ipcar smiles thinking about him. “I get kind of desperate if I’m around too many people. People frazzle my brain.”

But Adolph knew everyone. He organized the purchase of the town wharf, founded the Maine Festival, and sat on many art and environmental boards until he died in 2003 at 98. All of this prompted Governor James Longley to call Adolph “the most important man behind the scenes in the state.”

There’s an old Maine trope that says it doesn’t matter how long you hang around this state; if you weren’t born in Maine, you’re always from away. Ipcar never thought about it. She didn’t need to fit in.

“I guess I’m a loner. A hermit. All my life I’ve given my attention to one person at a time.”

She just painted—though never the landscape she saw out her farmhouse window. Maine, she says, “is too beautiful to try and replicate.”

There’s a kind of preternatural calmness about Ipcar in the way she talks and moves and thinks, a deliberateness and clarity. It doesn’t surprise me when she says it never mattered if her boys drove fire engines up her easel while she painted, or if the cousins from her brother’s place next door ran roughshod through the studio. She never fussed over the interruptions.

Then she tells me a secret: “There is the artist life and then there is the doing of the art.” She chose the latter. “The art is why I’m still alive.”

She has a name for how she paints: “non-intellectual cubism,” with a smile. She draws triangles and circles and squares underneath the herds of animals to create a geometric underpinning. When she realized she could do this—provide balance and order through shapes—it was a breakthrough.