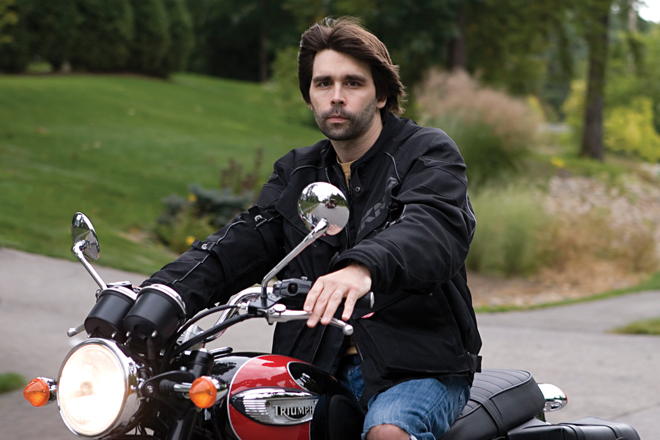 As soon as the writer called Joe Hill began appearing in public, it quickly became clear that he looks an awful lot like that other Maine horror writer. But in order to blaze his own trail, Joe decided to drop the “King” from his name. In the years following this bold move, he’s published a book of short stories, multiple novels, and we will soon be seeing a big screen adaptation of his book Horns, starring Daniel Radcliffe as the demon in suburbia.

Did you always know you wanted to write horror fiction, or did you ever consider being, say, a scientist? When I was a kid, other kids had posters on their walls of athletes and rockstars. I subscribed to Fangoria magazine, which was a horror magazine that celebrated the work of gross-out special effects guys. I would hang their pictures on the wall. I was the kid who would go to a horror film and be laughing while everyone else was covering their eyes. By the time I got to college, I knew I wanted to be a professional writer. But I decided two things. One, I wasn’t going to write as Stephen King’s son. And two, I wasn’t going to write horror fiction, because that is what my dad writes. The second one didn’t stick.

Why didn’t you want to write under your real name? I never wanted to ride my dad’s coattails. Maybe that would make a publisher some money, but readers would be disappointed. I so desperately wanted to be a successful novelist, and I couldn’t bear the idea of having just one book and that’s it. So I dropped the last name and started writing as Joe Hill, and I was able to keep it a secret for about a decade. I even kept it a secret from my agent.

At what point did you decide to make your identity known? My plan was to have the pen name come apart when I was dead—or maybe sooner. I never decided to out myself. I had reached a point where I had written a bunch of novels that had been turned down, and I was beginning to think I wasn’t going to make it as a novelist. But I had some success with short stories, and I knew I could do that. I ended up getting a book of short stories [20th Century Ghosts] published in the UK, and with that came author readings. As soon as I started to appear in public, people started to ask, “do you think he looks like…” And some Stephen King fans remembered that The Shining was dedicated to “Joe Hill, who shines on.” I knew I was running out of time.

I think you’re really good at writing female characters. Where do you get your inspiration for these tough girls? I have a tendency throughout my life to find certain creators who I fall in love with and reverse engineer their work. As I kid, I was passionate about all the films of James Cameron. One thing that marks a lot of his work is Cameron’s sense of creating smart, tough, thoughtful female leads. Characters who are easy to love but sometimes difficult to like. Also, my mom looks at all my work. She is the first person to see all my work.

She’s a writer too, right? Yes, Tabatha King is a very successful writer in her own right. She’s written about small town Maine very successfully and with great insight. She comes from a big Maine family, the Spruce family, and she has five sisters. All those aunts were a big part of my life. They’re all fierce Scrabble players, and fiercely opinionated about politics, fiction, education. A lot of my childhood was spent sitting under the kitchen table while the Spruce family sat around drinking coffee late into the night and bitterly arguing politics and literature. So a lot of my sense of femaleness comes from this collection of two-fisted, white-knuckled Maine women I’ve known since childhood.

Parenting is another theme that surfaces in your book NOS4A2. What made you decide, as a parent, to include that in your horror novels? I knew for a long time that I wanted to write about parenting. Because I think while the monster in the closet is plenty scary, being a parent is terrifying, because every day gives you a new opportunity to screw things up. The world is full of sharp edges for your kids to cut themselves open on, and you can only do so much to protect them, and that is a constant source of fear. It’s scarier than any monster.