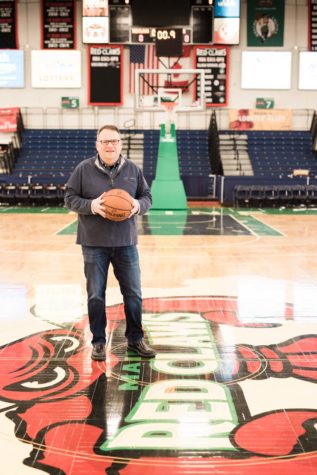 When Bill Ryan, Jr., makes an investment, one of his top considerations is how the project will impact Maine’s growth and development. “My family loves Maine, and we want to continue to develop a prosperous economy in the place we call home,” he says. Along with being the principal owner of Maine Red Claws, Ryan is a co-owner of Portland Pie Company and a former owner of the Oxford Plains Speedway. Ryan was also a principal in the early stages of the Thompson’s Point development project in Portland. When he founded the Maine Red Claws in 2007, he says, not everyone believed in the project, because they didn’t think a basketball team was necessary. Seeing the effect of the team on Maine’s entertainment industry has changed minds, he says, and has proven to Ryan that it was worth the risk. Further proof can be found on the faces of fans. “It is gratifying to see people having a great time with their families and leaving with smiles,” Ryan says. “We all have responsibilities that can drag us down. Fun experiences with our family and friends can pick us back up.” Getting up during tough times is a lesson Ryan learned through sports. Facing problems on the field as a college athlete taught him how to better handle issues in other aspects of life. “If you can stand toe to toe with an opponent on a football field, it makes a tough business negotiation seem a little less intimidating,” he says.