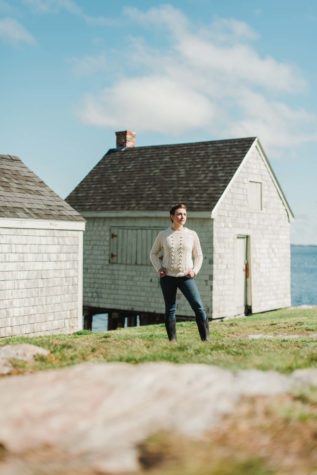 If there is a traditional path to becoming CEO of a seaweed company, Briana Warner did not follow it. For six years she served as a diplomat for the U. S. Department of State, including in Guinea for the country’s first democratic election. After moving to Maine, she started Maine Pie Line, an acclaimed Portland bakery known for its unique pie flavors, including many savory ones. She sold the pie company after becoming economic development director at the Island Institute, where she helped fishermen diversify into different forms of aquaculture. While at the Rockland nonprofit, she worked with Ocean Approved, the country’s first kelp farm, to build up its supply chain. Last year she joined Ocean Approved as CEO and helped develop its first retail products. “It actually feels very natural,” Warner says of her career trajectory. This spring the company, now called Atlantic Sea Farms, began selling and distributing its products, including jars of seaweed salad and kelp kimchi, frozen cubes of kelp for smoothies, and ready-cut frozen kelp. Atlantic Sea Farms works with more than a dozen kelp growers along Maine’s coast. “Our state has always placed incredible value on our marine industries and the communities that are built around the ocean,” she says. While Maine’s fishing industry is currently reliant on lobster, which makes up three-quarters of the state’s total fishery value, she says Maine’s growing aquaculture industry is the best possible way to ensure that fishermen and the communities that rely on fishing continue to thrive. “Aquaculture can help us ensure that our coast doesn’t lose our traditional marine livelihoods,” Warner says. “We have to embrace this new way of fishing in order to remain who we are.”