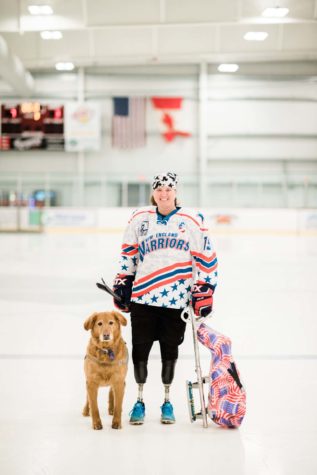 After Christy Gardner was injured overseas while serving in the U.S. Army Military Police Corps, she was told she’d never be able to do the things she once loved. “As a disabled veteran, the drastic change in life and lifestyle when you get hurt is often worse than the injury itself,” she says. “To go from a scholarship athlete and a female soldier that met the male fitness standards to being told I would never be ‘active’ again was a terrible blow.” Gardner, who sustained brain trauma, spinal damage, skull fractures, and the loss of both legs below the knee, was determined to make the most of her life after the injury. She discovered adaptive sports, returned to college, and earned a degree in therapeutic recreation. “I wanted to give that feeling of breaking down barriers to other folks, too,” she says. Gardner is now the director of the New England Warriors Sled Hockey Program, which offers the sport to disabled veterans throughout New England. She is also the assistant captain of the U.S. Women’s Sled Hockey Team, and in 2013 she was named USA Hockey’s Disabled Athlete of the Year. “My body and spirit were badly broken, but with the help of other disabled veterans, I’ve learned that there’s still so much I’m capable of,” Gardner says. “I learned to believe in myself again and that I could actu- ally do, and have done, all of the things the medical team said I never would. Now no one can tell me what I can’t do.”