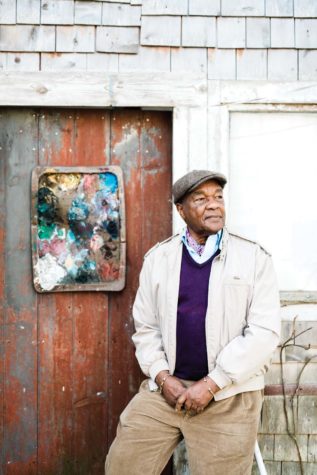 David C. Driskell first came to Maine in 1953 as a participant at the Skowhegan School of Painting and Sculpture residency program, and has always felt that the state was a special place for artists. At his studio in Falmouth, where he lives during the summer, he feels at one with nature and considers it a privilege to have the peace and quiet needed to keep his creative spirit alive. “Even when I create compositions that relate to memory, history, and the broad aspects of American culture, Maine helps to fuel my ideas because of the rich history of artists working in Maine over the years,” he says. Driskell, one of the world’s leading authorities on African American art, received honorary doctoral degrees from four educational institutions in Maine. In 2001, the University of Maryland established the David C. Driskell Center to honor his work as an artist, scholar, collector, and curator. He says being represented in the permanent collections of some of the top museums in his adopted state, including the Portland Museum of Art, Bowdoin College Museum of Art, Colby College Museum of Art, Farnsworth Art Museum, and Center for Maine Contemporary Art, adds validity to his love of Maine. “My life has been enriched by being a part of a cultural continuum in which my art has been promoted and collected in Maine on the basis of a quality canon that has little to do with the fact that I am African American,” Driskell says. “The entire nation could benefit measurably by adopting and enforcing such an enlightened point of view.”