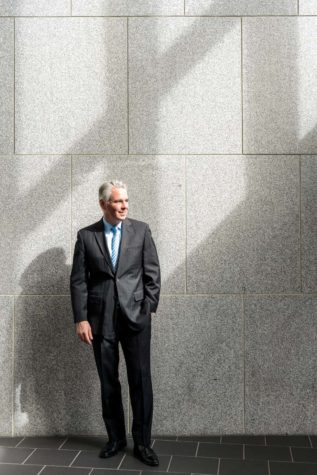 David A. Greene, who became Colby College’s twentieth president in 2014,has made the revitalization of downtown Waterville a priority for the college. Once located downtown, the college moved to its spot on Mayflower Hill thanks to Waterville residents who rallied to raise the funds needed to buy the land in the early twentieth century. “Today, while Colby is stronger than ever, Waterville is facing challenges,” Greene says. “With mill closings and fewer local businesses downtown, the city needs a new way forward. I believe that the city and Colby have found that new direction together, and we are committed to making it a reality.” Under Greene’s tenure, the college has bought several downtown buildings it plans to redevelop, spurring additional private investment in real estate. CGI Group, an information technology company, plans to create 200 jobs after it moves to a building purchased by the college, and Colby is developing a boutique hotel on another site it acquired. Earlier this year, Colby announced it had received a gift of more than $100 million to establish the Lunder Institute for American Art, a research center that will complement the Colby College Museum of Art. As president, Greene has established collaborations with several Maine organizations, including the Herring Gut Learning Center, Jackson Laboratory, the Maine Lakes Resource Center, and Up East Foundation, which is supporting projects for students on Allen Island, the family retreat of painter Andrew Wyeth. “Colby is very much a part of Maine,” Greene says, “deeply rooted in its community, connected to the state’s amazing natural resources, and partnered with organizations that reflect Maine’s impact on the world.”