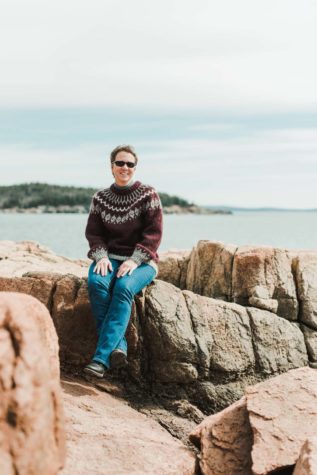 When Donna Wiegle moved to Swan’s Island in 2001, the only access to healthcare or eldercare was through a doctor who visited once a month. After living on the island for six years, she was instrumental in opening a health and wellness center in a former restaurant building, so residents could access the care they need. “Someone had to step up, and I guess that someone was me,” Wiegle says. As a medical laboratory technologist and the only employee of the Mill Pond Health Center since its opening in 2007, Wiegle witnesses the daily struggles that seniors face when aging on a remote island. She says that seniors play an integral part in the island’s culture and that she must work to help them. Through the health center, which doubles as a community meeting space, Wiegle aims to bring the islanders the same care that is available on the mainland. Each month, primary care providers visit the health center to see patients. In addition, a podiatrist and a dental group visit on a regular basis. She also organizes public educational meetings, such as pre-diabetes training, cancer support groups, and weight loss programs, for the island’s 350 year-round residents. As a result of her work, she received the Island Institute’s Community Champion award in 2019, and she has also received the American Heart Association Heartsaver Hero Award, Healthy Acadia’s Community Health Champion Award, and Bar Harbor YWCA’s Woman of the Year Award. “Even if someone is old or sick, they should have the chance to interact and contribute to the community,” says Wiegle, who in 2016 was diagnosed with advanced-stage ovarian cancer. “My disease will eventually end my life, but in the meantime, I hope to be able to continue serving my neighbors on Swan’s Island, as well as working on issues affecting the whole coast of Maine.”