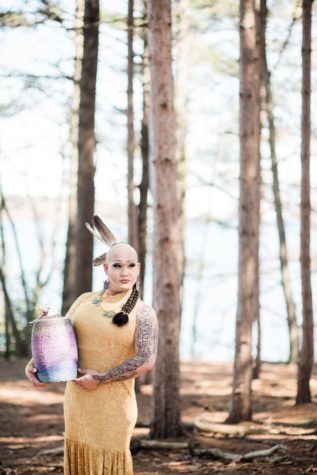 Geo Soctomah Neptune’s life is a series of opposing ideas: traditionalism and modernism, Western and Native cultures, masculine and feminine spirits. Neptune’s life and work as a Passamaquoddy basketmaker and drag performer embody these oppositions. “I hope that others can see that my basketmaking is an important part of cultural preservation as well as evolution, that my drag is a challenge to Western patriarchal societal norms, and that these two things are not separate, because these art forms are who I am as a two-spirit,” says Neptune, who uses the pronoun they. A two-spirit, Neptune says, is “both male and female, yet neither female nor male.” Neptune’s basketmaking, which has won numerous national awards, allows them to express their identity through a traditional indigenous art form. “I am proud to be able to speak my language and to practice the traditions that my ancestors practiced,” Neptune says. “Every effort was made by the colonizers to kill our language, erase our traditions, and make us forget who we are.” Neptune also works to keep indigenous culture alive as a teacher in a Passamaquoddy language immersion program. Neptune hopes that the effect of their art and drag performances will be “that future generations will experience less racism, less homophobia, and less transphobia than myself and others have, and gain a stronger sense of identity and community as a result.”