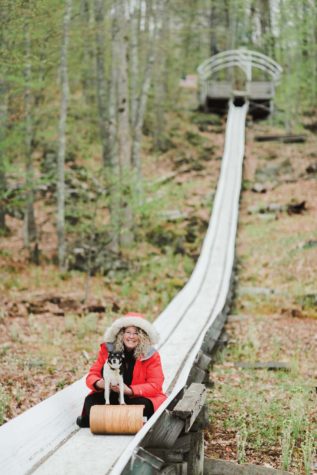 “Each year the Toboggan Nationals culminates in a big family reunion,” says Holly Anderson, who has been involved in the event since first racing in it in 1998. She returned the following year as a volunteer, and in 2017 she became the assistant director at the Camden Snow Bowl, a town-owned recreation area that has hosted the toboggan race since 1991. “We all come together, bring a few new friends and family members, gear up for a little competition, and celebrate having fun in the cold, like any other family in Maine would,” says Anderson, who is chairwoman of the U.S. National Toboggan Championships organizing committee. The annual event helps to support the Snow Bowl’s operations and brings the community together during one of the coldest, darkest times of the year. Each February, up to 425 teams, composed of 1,300 racers from all over the country, and 6,000 spectators take part in the three-day-long event. The original (and only still-operational) 400-foot wood chute was built in 1937, and while it has been repaired and updated, some original timbers are still in place. Anderson feels lucky to have built a long-term relationship with committee members and the community. Year after year, she sees a consistent devotion from long-term racers and her committee coworkers. “I have never lived in a community with so many people who give their time and talents to others,” she says, “and I love being with these hardworking, community-minded, altruistic people.”