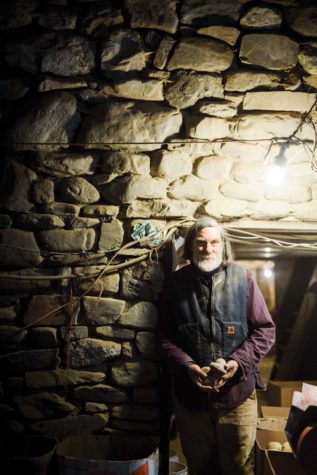 As the owner of Wood Prairie Family Farm in Bridgewater for the past 40 years, Jim Gerritsen dedicated his life to organic farming and the politics that go along with it. His life’s work has been to realign our culture and the food it consumes by protecting the rights of organic farmers and promoting their products. As cofounder and president of the Organic Seed Growers and Trade Association, Gerritsen was the lead plaintiff in OSGATA et al v. Monsanto, a federal lawsuit filed in 2011 in which farmers disputed the validity of Monsanto’s transgenic seed patents, arguing that genetically modified seeds negatively impacted human health; the farmers also challenged the implication that if organic farmers’ products were inadvertently contaminated by Monsanto plants, they could be sued for patent infringement. He received the Jim Cook Award from Food For Maine’s Future in 2013 in honor of his contributions to Maine’s local food movement. In early 2014, Gerritsen helped Maine and the Maine Organic Farmers and Gardeners Association pass the historic LD 718, which would require food with genetically modified ingredients to be labeled if five contiguous states adopt legislation requiring mandatory GMO labeling. He has also combatted multiple attempts to weaken Maine’s Department of Environmental Protection’s mining regulations. He now describes himself and his wife, Megan, as “farm hands” at Wood Prairie since their 23-yearold son, Caleb, has taken over the family business. Through hard work as active citizens, Gerritsen says, “We can make this the state we want to live in.”