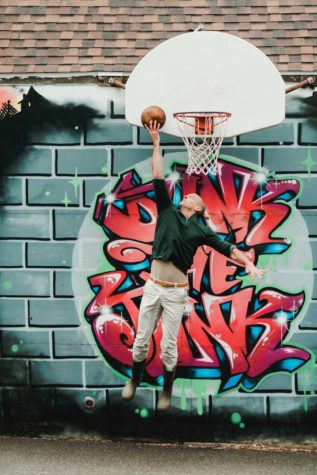 As a pediatrician, Dr. Kevin Strong saw firsthand the effects of childhood obesity. He saw public health campaigns, such as former First Lady Michelle Obama’s Let’s Move!, focus on exercise instead of over-consumption of sugar. He saw the slick branding and advertising of soda and other processed food companies. And he saw the boring educational materials about the health risks of consuming too much sugar. “Coca-Cola has the greatest branding in the world, and then we come out with this dribble,” Strong says. So the Camden pediatrician founded Dunk the Junk, a nonprofit that uses hip-hop, street art, and social media to educate kids about the danger of excessive junk food consumption. Dunk the Junk focuses on how corporations have pushed soda and junk food onto kids, and that anti-establishment message matches the ethos of street art and hip-hop, Strong says. One campaign titled Operation: Defeat Sodatron imagines soda companies as an evil villain—Sodatron—that kids can defeat by uniting together. Strong brought on a Portland street artist, Mike Rich, to create murals with Dunk the Junk’s messages, and the organization has visited schools across Maine and around the world. According to the Center for Disease Control, the percentage of children and adolescents in the United States affected by obesity has more than tripled since the 1970s. Kids who are obese can have the same health issues as adults, including hypertension, joint issues, and increased risk of heart disease, stroke, and 16 different cancers, Strong says. “We have a moral obligation to warn every child about the overconsumption of sugar. These kids don’t know what they’re doing to their bodies and it’s preventable. I’m not going to stop until every kid knows it’s true.”