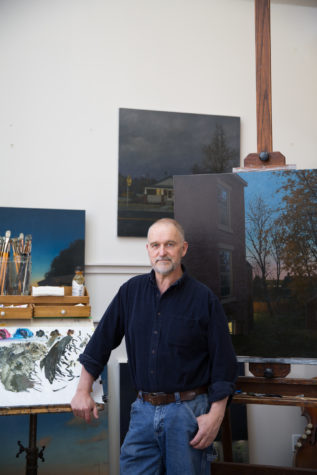 Linden Frederick is sometimes described as a landscape painter, but instead of mountains and seas, Frederick paints human-made environments. His scenes are set at dusk or at night, capturing the moments after public spaces have emptied and people have retreated into their homes. “I’m really not a landscape painter. I’m a narrative painter,” he says. He wants his scenes to trigger memories or emotions in viewers and to serve as starting points for larger stories. One of his paintings, Night After, shows a sagging snowman in the front yard of a modest, one-story home, with yellow Christmas lights framing one window and part of the door, a scene that’s a familiar anticlimax to many. “It’s something that everybody experiences, so I think that’s why people respond to my work,” Frederick says. Frederick grew up in upstate New York, but he is now based in Belfast, and Maine towns and cities from Kittery to Houlton provide much of his subject matter. Since moving to Maine 27 years ago, he has had over 15 one-person shows. His current project, Night Stories, has been seven years in the making, and he considers it the most important of his career. The show, which will be a collaboration with 15 nationally known writers, is scheduled for May of next year at Forum Gallery in New York City. Later that summer, it will move to the Center for Maine Contemporary Art in Rockland.