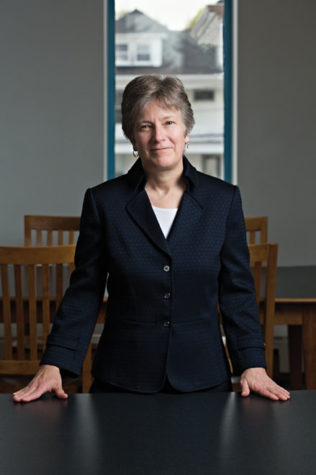 Mary Bonauto has worked as the civil rights project director at Gay and Lesbian Advocates and Defenders for 25 years, where she is dedicated to providing equal rights for the LGBT population and HIV patients. “I believe in the Constitution’s promises of equality and liberty for all, and the power of law to set standards and transform our understandings of what those promises must mean in day-to-day life,” says Bonauto. In 1999 Bonauto and two Vermont co-counsels won in Baker v. State of Vermont, which led to the nation’s first civil union law in 2000. Bonauto was also involved in a case that brought second-parent adoption to Maine, which she believes makes the state a secure and welcoming place for children whose parents are same-sex couples. This year, Bonauto argued before the Supreme Court in a case with the potential to overturn all state bans on same-sex marriage. For her accomplishments, Bonauto was awarded a MacArthur Fellowship in 2014 and Equality Maine’s Lifetime Achievement Award in 2015. Bonauto continues to take on cases for this issue and hopes that the changes she has helped make to New England policies will set an example for other states across the country.