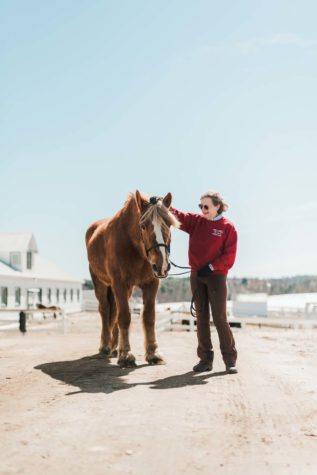 Meris J. Bickford, ESQ. | CEO of the Maine State Society for the Protection of Animals

The first time Meris Bickford stepped inside the Maine State Society for the Protection of Animals (MSSPA), she fell in love. “Being here is like a calling, as though all of my previous life experiences were simply preparation for what was needed here, to reinvigorate the organization and rescue the financially failing shelter,” Bickford says. The Windham-based nonprofit organization rescues and rehabilitates abused and neglected horses and helps find new homes for the rescued equines. MSSPA largely relies on volunteers and donations to maintain operations. Bickford, who started with the society in 2007 and took over as CEO in 2011, has been fundamental in the organization’s revitalization and continued success. One significant change she implemented was the integration and development of core volunteer groups, including women who are incarcerated at the Southern Maine Women’s Reentry Center, also in Windham. There’s a parallel of healing between the women from the center and the rescued horses, Bickford says. The women see firsthand that the horses can recover, and it helps to facilitate their own recoveries. Bickford developed an organizational foundation for the non-profit by overseeing the creation of a website and newsletter, creating development functions and a budget for the organization, staffing the board of directors, lobbying on animal welfare issues, and beginning conversations to seek financial support, all while mucking stalls and feeding horses. “If I ever feel discouraged in my efforts here—which is rare,” she says, “I just go out to the barns and look into the faces of those who are depending on me.”