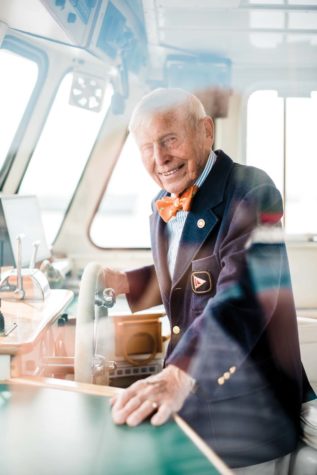 For Merle Hallett, sailing is more than a hobby or passion—it’s a way to give back. In 1982 he cofounded the MS Regatta, now the MS Harborfest, to raise money for the National Multiple Sclerosis Society. The event, which includes a race around Casco Bay, has raised more than $3 million over the past three decades. “I feel an obligation to pay back for all of my good fortune, and Maine is the natural place for me to contribute,” Hallett says. The Portland native grew up on Munjoy Hill and learned to sail at East End Beach, where he would launch a sailboat he built himself. At age 23, he started working at Handy Boat, a boatyard in Falmouth. In 1966 he bought the business and expanded it continually until he retired in 2008. Handy Boat allowed Hallett to introduce boating to new generations. “This led to being able to give many young people the opportunity to work on the water, learning to appreciate boats, sailing, and sailboat racing,” he says. Hallett has always had a passion for racing and competed in his first boat race when he was 16 years old. Since then, he’s competed in and won races all over the country and world.