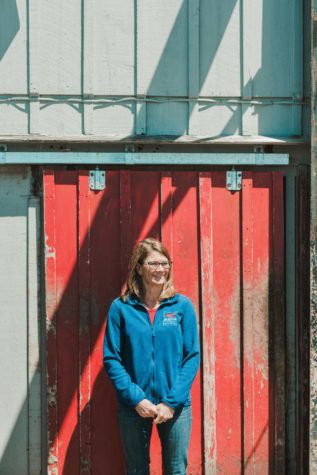 “Maine’s lobstering communities are the economic backbone of our coast,” says Patrice McCarron, executive director at the Maine Lobstermen’s Association. McCarron, who has been in the position since 2001, supports these communities on many different levels. She ensures that any new regulations support the continued success of the lobstering community and that they do not undermine Maine’s lobstering culture and traditions. In addition, McCarron has recently worked with the Maine legislature to increase penalties for those who violate the state’s lobster conservation program. “Lobstermen believe so strongly in their conservation practices that they are willing to revoke the fishing privileges of those who violate these laws,” she says. McCarron is also the founder of the Maine Lobster Leadership Institute, a program focused on educating young people in the lobster industry on the issues it faces, as well as helping them find their places as future leaders. “Since its start, I have seen many young men and women step into leadership roles on a variety of boards, and even enter the Maine legislature,” she says. McCarron has also represented Maine for 13 years on the Atlantic Large Whale Take Reduction Team, a group established by the National Oceanic and Atmospheric Administration’s fisheries agency to help minimize hazards to marine mammals caused by fishing gear. In recent years, right whales in particular have been threatened by climate change and fishing gear. McCarron says it’s essential to quickly find solutions for removing large amounts of rope from the ocean, and that she will be working with and helping lobstermen through this daunting task. McCarron’s passion and dedication to the working waterfront is unmatched, and thanks to her work, lobstering communities will be in good hands for generations to come.