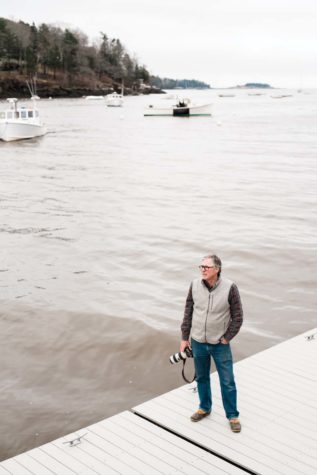 Photographer, Owner of Ralston Gallery, Co-founder of The Island Institute

Described by fellow Island Institute co-founder Philip Conkling as “the most notable Maine coast photographer since Eliot Porter,” Peter Ralston has been capturing the coast and its people for four decades. Ralston moved to Maine at the urging of Andrew and Betsy Wyeth, who were his next-door neighbors when he was growing up in Pennsylvania. He has spent his career photographing around the world, but he says Maine is the first place he has felt like he is home. “The Maine coast has two defining characteristics,” Ralston says. “The rugged beauty of the coast is the more obvious, but it’s the fundamental character of the people and working communities here that is, to me, far more compelling. It is particularly the latter which I have sought to understand, honor, and celebrate as best I know how.” His best-known photograph, Pentecost, encapsulates a bit of the character and appeal of the coast. In it, a lobster boat is towing a dory full of sheep bound for Allen Island, heading toward a horizon line barely visible through thick fog. The scene—stunning, thrilling, and a bit bizarre—imparts a sense of Yankee independence and ingenuity, and also of interconnectedness. The idea of communities putting personal differences aside to overcome challenges is a lesson Ralston has learned from the people along the coast and tried to capture in his photographs. “America needs much, much more of that—especially now—and in my own small way as a storyteller,” he says, “I try to share that message.”