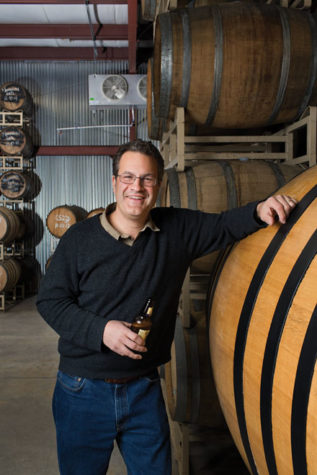 “From the first day I set foot in a brewery 22 years ago, I knew I wanted to spend my life as a brewer,” says Allagash Brewing Company founder Rob Tod. “I loved everything about it—the hard work, creativity, and collaboration.” Tod and his team collaborated to build a traditional “coolship” to brew spontaneously fermented beers at the brewery in Portland. Because of this beer, his team was invited to special festivals in Belgium, where Allagash was the only non-Belgian brewer, to celebrate these beers made in Maine. Allagash produces a Tribute Series, which sends one dollar from every 750ml bottle and 25 cents from every pint poured to a specific philanthropic recipient in Portland: Victoria Ale benefits Victoria Mansion, Victor Ale donates to the St. Lawrence Arts Center, Hugh Malone benefits Maine Organic Farmers & Gardeners Association, and Fluxus Ale gives to Barbara Bush Children’s Hospital at Maine Medical Center. The company also has a philanthropy program, through which it donates $100,000 a year to Greater Portland’s philanthropic organizations that are making a positive impact in Maine. In 2014, the brewery donated a total of $240,000 to local causes. Allagash is also committed to sustainability. Ninety-two percent of the company’s electricity use comes from renewable energy credits from First Wind’s Lackawanna, New York, wind farm. Brewing uses 57 tons of barley and wheat per week but most of this is left over as nutrient-dense “spent grain.” Allagash donates this spent grain to local farmers to help reduce their feed costs. In recognition of these greener efforts, Allagash received
the Governor’s Award for Environmental Excellence.