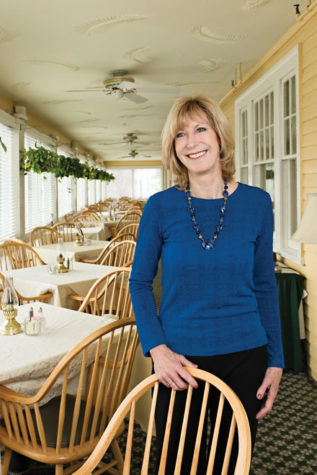 Robin Zinchuk moved north from New Jersey in 1979 to “find herself” and made her way to Bethel, Maine in 1984. “What I found were communities of resourceful, hard-working people, who really care about and look out for each other. I found what I was looking for: a place where I could share my passions and energy to make a difference in the lives of the people around me,” says Zinchuk. She is currently the executive director of the Bethel Area Chamber of Commerce and former owner of Chapman Inn Bed and Breakfast. Zinchuk began working at the chamber at the age of 30. When she started there was no staff and a $5,000 budget. “With the help of a fantastic group of volunteers and coworkers, we have become a well-respected, extremely active organization that is helping to create prosperity in the Bethel area and western Maine,” says Zinchuk. After realizing the number of nonprofit organizations in the area, Zinchuk helped create the Bethel Area Nonprofit Collaborative, a network of over 30 organizations in Oxford County. Zinchuk is on the advisory board for Maine Woods Consortium, the board of trustees for Western Maine Health/Stephens Memorial Hospital, and the board of directors for GrowSmart Maine. She is president-elect of the Bethel Rotary Club. She was also appointed by Governor John Baldacci to the Northern Forest Sustainable Economy Initiative, a gathering of leaders from the four northern forest states, organized by the Northern Forest Center.