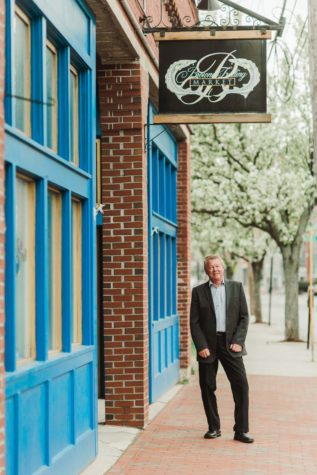 Rod Mitchell’s family has a long history in Maine’s seafood industry. They first came to Maine in the early 1700s and made a living fishing on the Kennebec River and in Merrymeeting Bay. In his office in Portland, he has a vintage photograph of multiple generations of his family gathering around a giant sturgeon they had caught. Mitchell himself has been selling hard-to-find seafood for more than three decades. He was running a wine and cheese store in Camden in the early 1980s when Jean-Louis Palladin, chef of the acclaimed Jean-Louis at the Watergate Hotel, visited his store and started asking about seafood. Palladin connected him with a caviar supplier, and asked Mitchell to source him Maine seafood that had previously been ignored, including scallops and elvers. Soon other renowned chefs started asking Mitchell to supply them with Maine seafood, and he opened Browne Trading Company on the waterfront in Portland 1991. Browne Trading Company now supplies caviar, fresh fish, smoked seafood, shellfish, and other seafood sourced from around the world to some of top restaurants around the country and in Maine, along with home chefs. The company’s mail-order business has grown significantly in recent years, and its retail store has been open since 2000. “I think we started the specialty seafood revolution,” Mitchell says. “We’ve made people more aware of what they were getting—the higher quality of seafood, it comes from Maine—and we’ve opened up the eyes of people to the great seafood that comes from all over the world.”