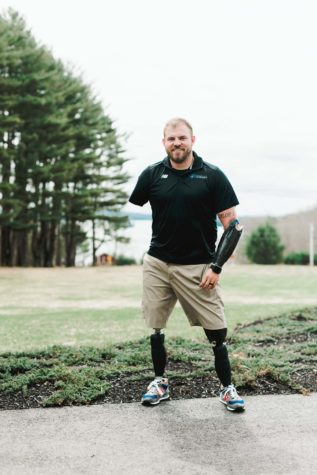 Seven years ago, while on patrol in Afghanistan, Travis Mills took off his backpack. When his bag reached the ground, a hidden improvised explosive device erupted beneath him, and he became one of four surviving quadruple amputees from the Iraq and Afghanistan wars (there are now five). “I came to a point in my life when I had to decide if I was going to give up or keep pushing forward,” says Mills. With the support of his wife and motivated by his six-month-old daughter, he retaught himself how to perform everyday tasks, including walking, eating, and driving. In 2013, after moving to Maine following a 19-month recovery at Walter Reed National Military Medical Center, Mills founded the Travis Mills Foundation to help other wounded veterans. Four years later he opened a retreat and recovery center in Rome for post-9/11 veterans who have been injured as a result of their service and their families. The retreat offers 22 weeklong programs where wounded service members and their families receive an all-inclusive free-of-charge vacation to heal and reconnect. During their stay, they are encouraged to participate in outdoor adaptive activities such as archery, kayaking, and snowshoeing. Mills says that the success of his nonprofit and the way Maine welcomed him and his family are examples of the state’s generosity. His goal with the retreat is to share the Maine experience with recovering members of the armed forces. “You have to take care of your fellow brothers,” Mills says of the veterans he helps. “Together we push forward every day because there is no reason ever to stop.” Mills, a retired United States Army staff sergeant, received a Bronze Star and Purple Heart for his military service, and through his nonprofit work, he earned a New Englander of the Year Award from the New England Council and the Citizen Honors Award from the Congressional Medal of Honor Society—each a testament to his motto: Never quit. Never give up.