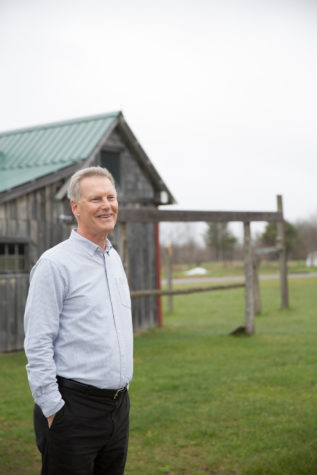 “Advocating on behalf of good, organic food and small family farms, is central to my life,” says Ted Quaday, executive director at Maine Organic Farmers and Gardeners Association (MOFGA). Quaday took over the position in 2013, after spending the previous 15 years working for family farms and sustainable agriculture. He spent a decade as program director at Farm Aid, where he managed the organization’s Farm Aid Grants program and worked with family farm and food advocacy organizations around the country. Following that, he worked for three years as the Organic Farming Research Foundation’s communication director. “MOFGA’s reputation as a national leader in the organic farm and food movement is unparalleled,” Quaday says. “I am simply honored to be a part of the team.” Since starting at MOFGA, he says he’s particularly proud of the work the organization’s development group has done to rebuild increased financial stability. In less than three years, the organization has increased endowment by more than $3 million. MOFGA, based in Unity, has 11,000 members, and certifies nearly 500 organic farms and processors. “Many of these businesses are focused on trading locally, adding employees, and helping to build rural communities in Maine,” Quaday says.