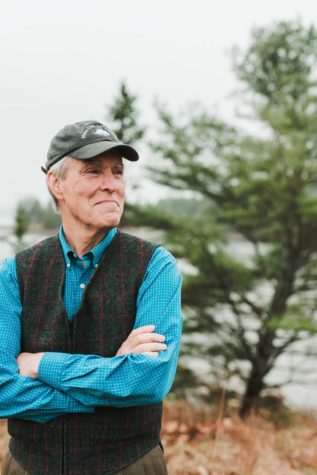 Tim Glidden has spent his entire career conserving Maine’s natural resources, working with a variety of stakeholders to protect irreplaceable assets. “The satisfaction that comes from conserving land, it’s so strong, so lasting, there’s really nothing like it if you care about Maine and Maine’s environment,” he says. As a child, Glidden remembers running through the woods behind his family’s home and waking up on summer nights to hear loons calling across Damariscotta Lake. “There’s a deep connection to the vast natural world which reminds me of my modest place and my responsibility to care for creation,” he says. Glidden, president of Maine Coast Heritage Trust (MCHT) since 2011, previously served as director of the state’s Land for Maine’s Future program, deputy director of the Natural Resources Council of Maine, and as an environmental policy analysis for the Maine legislature. In his time with the Land for Maine’s Future (LMF) program, one of his proudest achievements was being part of the team that reached a deal with a paper company to permanently conserve 50 miles of the Machias River mainstream and tributaries, which he calls “truly one of Maine’s hidden gems.” Another memorable victory came in 2014 when the owners of the Goslings, a group of small islands off Mere Point in Brunswick, needed to sell the land. Working with LMF and generous donors of every size, MCHT helped raised well over $1 million to buy the land and turn it into a public preserve. “I just feel that it has been an immense privilege to live and work in Maine, in all sorts of ways, protecting what makes Maine such a special place,” Glidden says. “It’s work that helps me stay optimistic.”