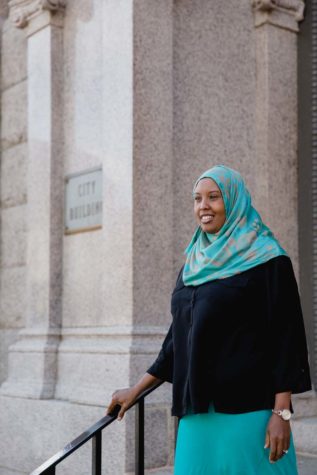 ZamZam Mohamud, the first Somali immigrant to be on the Lewiston School Committee, has served a prodigious role in her adopted hometown since arriving in 2001. She’s a certified nursing assistant at Central Maine Medical Center, where she also works as a translator when needed. Out in the community, she serves as a liaison between other immigrants and the city. If the police want something explained to the community, they call Mohamud. If other immigrants have questions about the school or the city hall, they call Mohamud. “If anybody needs help, I’m there for them,” she says. Mohamud found her way into the role as community leader by being visible, she says, but the motivation came from a desire to give back. “I really feel like this community has raised me and made me become who I am,” she says. It also provided an education to her daughter and son, Hanan, 24, and Jama, 22. Besides resettling in Lewiston and raising her two children, Mohamud says one of her proudest accomplishments was becoming an American citizen in 2005. “I was so excited to do it. It’s just one of those things, the dream comes true,” she says. “Now I’m in this wonderful country, and I can be whatever I want to be. The sky’s my limit.”