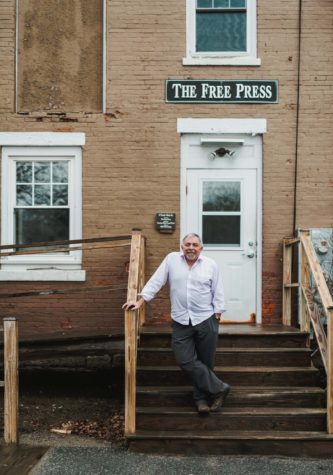 “You come to the place that you’re meant to be if you can go with the flow,” says Reade Brower. “None of this was by design.” By this, Brower is referring to owning six of Maine’s seven daily newspapers and more than 20 weekly publications. The level of consolidation among Maine’s newspapers by Brower’s media group, Masthead Maine, is unprecedented in the state, but Brower remains hands-off in the day-to-day operations of his publications and stays out of editorial decisions. His expansion into daily newspapers came in 2015 when he approached Maine Today Media, publisher of the Portland Press Herald, Kennebec Journal, and Morning Sentinel, about printing some of their papers. Instead, owner Donald Sussman suggested he buy the papers. “I just could not say no each time an opportunity rose. It seemed like it was a win-win. It would help create a sustainable business to help what I already have survive, and it also was a good way for the papers involved to find a good home.” Brower now owns three printing presses. That, along with other synergies among his publications, has made the newspapers more sustainable and allowed the newsrooms to avoid the kind of cuts that have gutted other local papers across the country, he says. “I think the biggest job of a newspaper is to be a watchdog and provide information to citizens about their communities,” Brower says. “If you’re doing those two things, you’re doing a good job.”