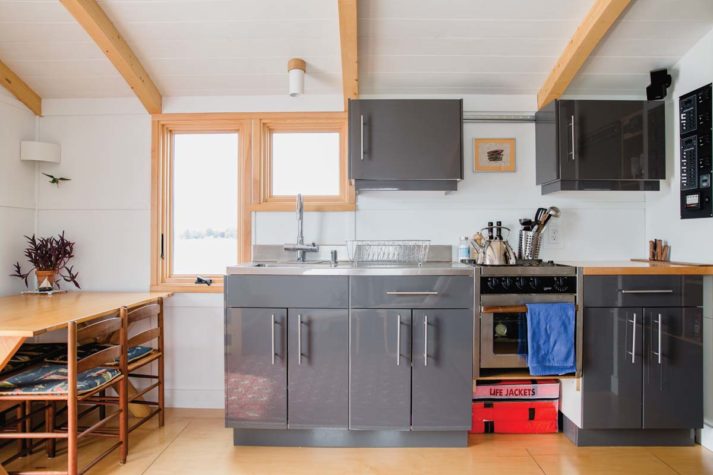 A kitchen from IKEA has everything a standard kitchen would have, plus a stack of personal floatation devices. 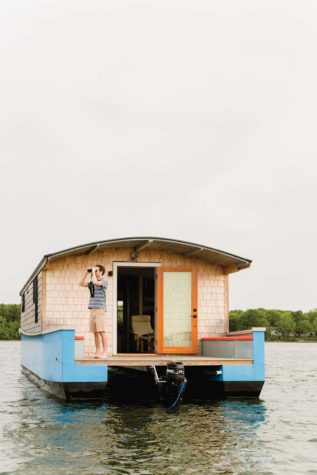 Celie and Jennings Boley’s houseboat was designed and built in collaboration with Jennings’s dad, John Boley of Boley Design. In the winter, the couple docks at a marina in Kittery, where they are in protected waters. 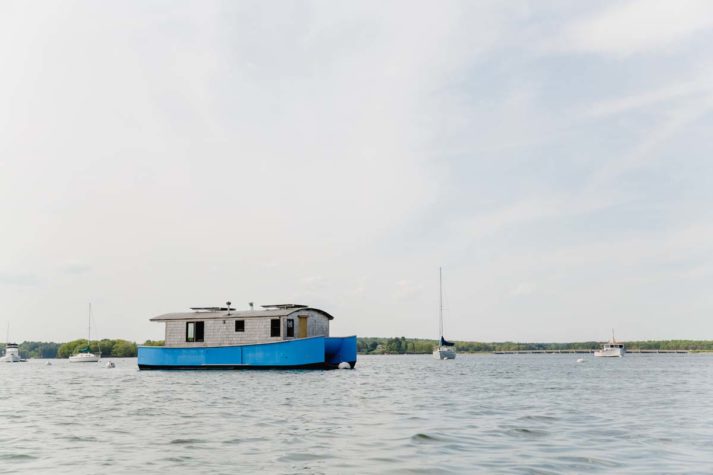 Cedar shakes are in keeping with traditional New England design. “We didn’t want loud architecture, especially on the water,” says John. “We wanted to make the boat look small from the outside.” An arched ceiling allows for maximum headroom inside, without creating a top-heavy, towering mass on the outside. 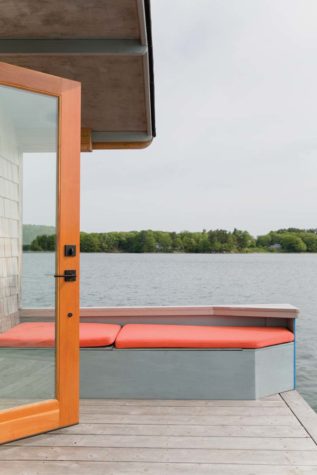 In the summer, the Boleys grill on the deck and swim right off it. 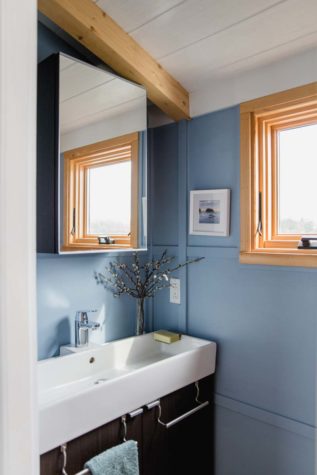 The compact bathroom features a composting toilet and a shower. 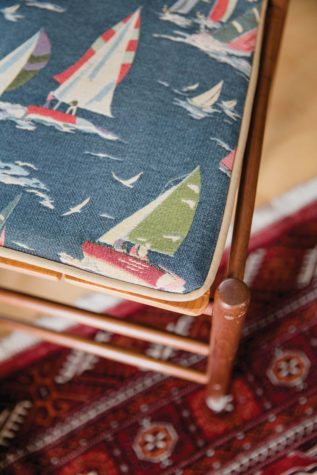 A detail of a vintage chair cushion—a nod to Jennings’s childhood growing up sailing. 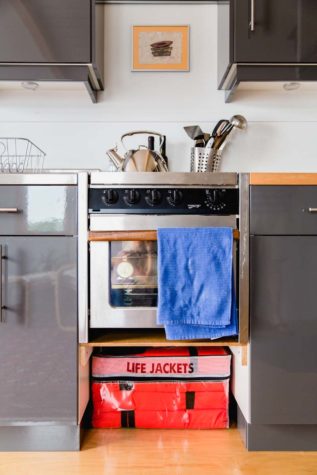 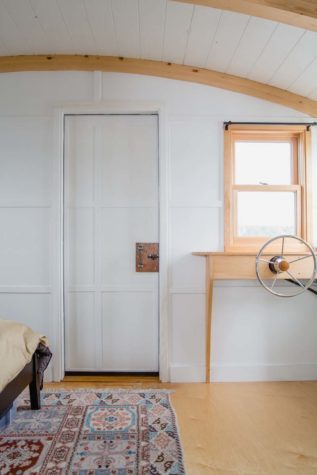 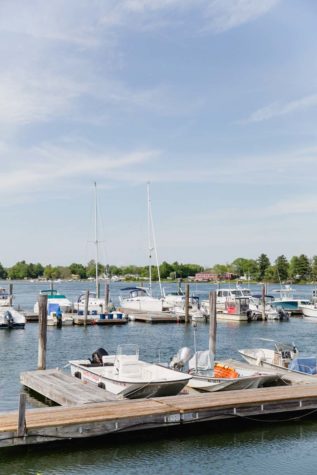 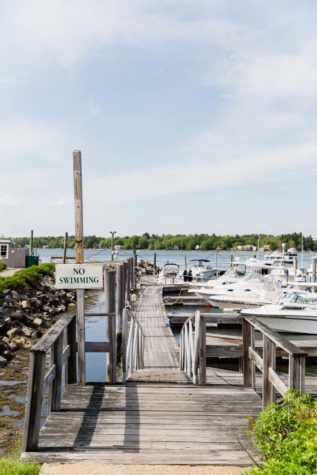 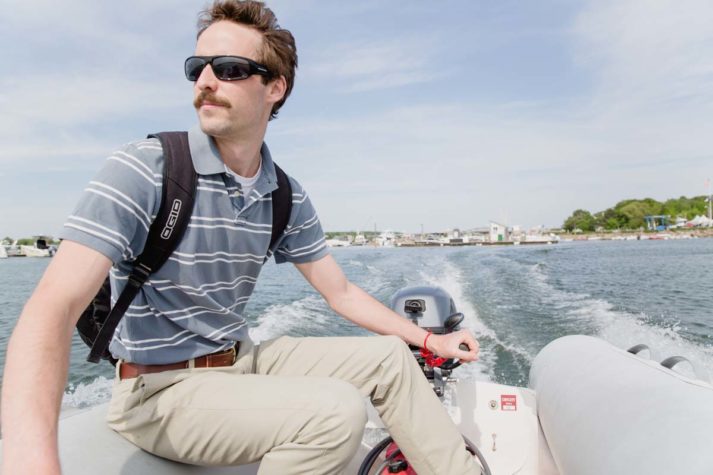 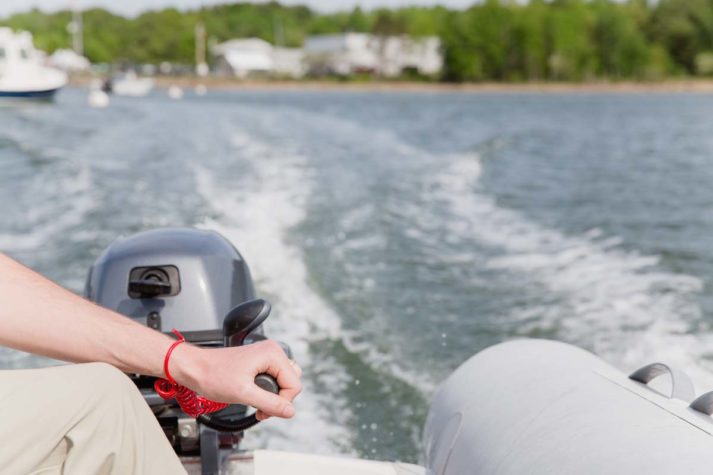 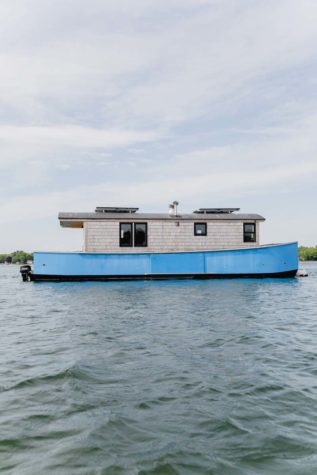 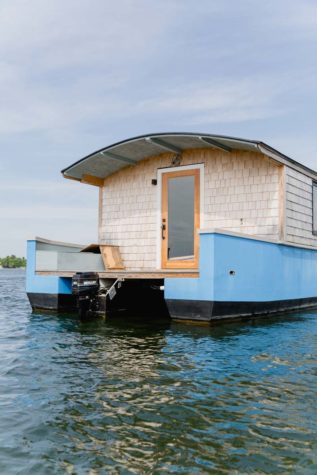 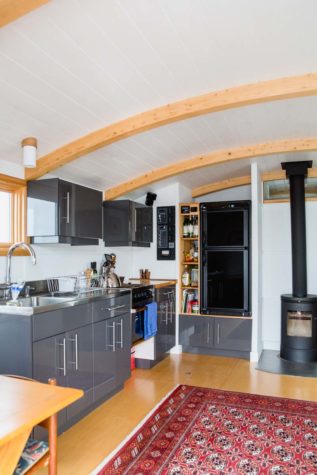 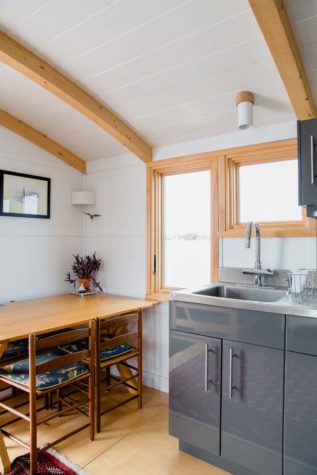 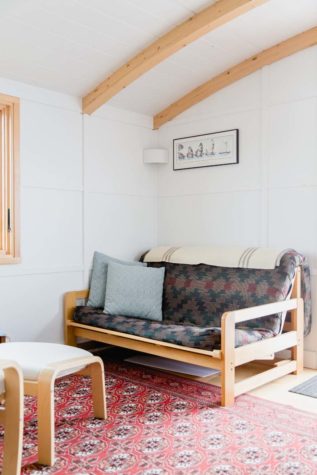 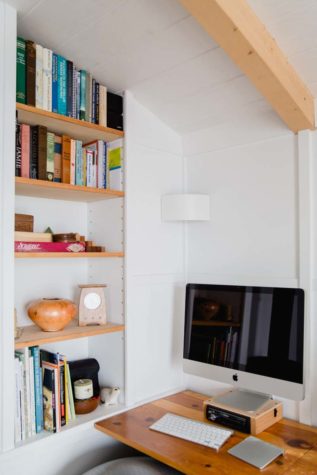 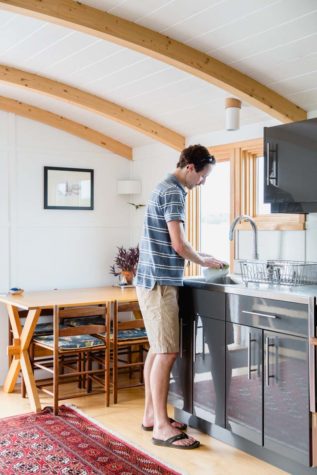 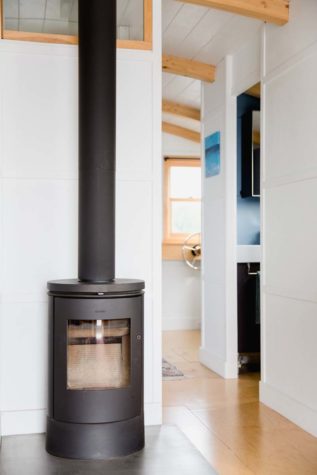 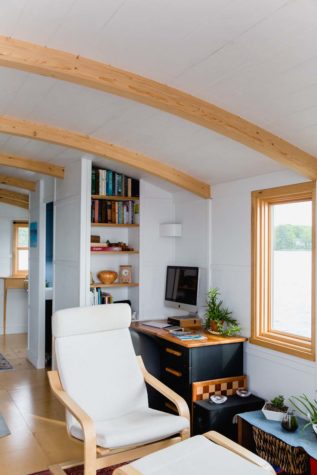 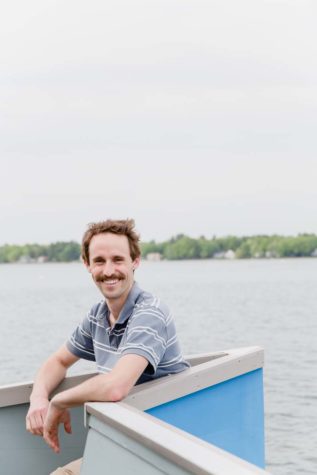 A father-son team builds a houseboat made for off-the-grid, on-the-water living.

The directions to Jennings and Celie Boley’s home on the day I visit go a little something like this: Drive to Kittery and park in the lot by the water. Walk to back of lot and follow brick path to gate. Enter code. Proceed down the dock to the slip. Climb aboard. This is a first for me; I’ve toured plenty of houses on the water, but none so literally on the water.

Celie and Jennings were a little over a year into their relationship when Jennings be- gan to get serious about an idea he’d had for awhile. An avid boat lover since his first sail when he was a baby in a bassinet, Jennings continued sailing throughout high school and college. After graduating, he did what many new grads do: got a job and began renting an apartment with roommates. But rent and roommates weren’t for him. “I was making a decent paycheck, had no kids, no car, few expenses, so I started throwing around the idea of building a houseboat,” he says. Living on the water would give him a place of his own and freedom from writing a rent check every month. At first, Celie thought this was just a pipe dream. But as the idea began to take shape, she realized Jennings was committed to making it happen. “I said, I can either do this when I’m retired or I can do it now,” Jennings recalls, “and she said, ‘Well, why not just do it now?'” The two are now married, and this pipe dream has become their home together.

Jennings’s father, John Boley of Boley Design, has been in the boatbuilding business on and off for 30-plus years. In addition to working at both the Maine Maritime Museum and Strawberry Banke in New Hampshire, he’s designed and built everything from 30-foot cruising cutters to power cruisers. When Jennings first started talking to his dad about his idea and working on the project together, John was excited but also cautious. “I wanted to make sure we knew what we were getting into,” he says.

The beginning of the design of any living space involves a lot of questions: how big, what style, where? In this case, John and Jennings had a few additional questions to ask: Will the boat be floating in one spot or will it need to move efficiently through the water? How big does the living space need to be to house Celie and Jennings comfortably year round? How big can it be and still fit safely on the road? How wide can it be without having to buy two slips side by side? John and Jennings played with several footprint dimensions before settling on 14 feet wide by 40 feet long. “Once you get much over 40 feet long you run into some pretty expensive slips or moorings that are way out in the middle of the channel due to turning radius,” says John. Anything larger than 14 feet wide would’ve required more than one slip.

Since the boat’s primary use is as a year- round home, living space was maximized and speed through water was a lower prior- ity. “We didn’t want to use much power to get through the water,” says Jennings. Since the boat wouldn’t be making any ocean pas- sages, a modest outboard is enough to push it along. “While we wanted to be able to go around to a few locations, for the most part, it’s nice to just come home and have it be in the same spot.”

Designed as a catamaran, the house sits on two custom-built wooden pontoons that keep it afloat. This design allows for the living platform to sit above the water rather than below it, where cold and condensation would make for less comfortable quarters. The boat is more stable on a platform with two hulls as well, a plus for Celie, who sometimes gets seasick. “The biggest motion we feel on board usually comes from the wake of other boats,” says Jennings.

On board, Celie and Jennings have every- thing they could need for year-round living: an open living/kitchen/dining space, a bathroom, and a bedroom—plus outdoor spaces in front and back. Electricity is pro- vided by solar panels (supplemented with battery backup when it’s cloudy) and heat comes from a wood stove. They have pro- pane for cooking, an on-demand tankless hot water heater, a composting toilet, and a shower. (They do laundry at the marina’s facilities.) In the winter, they dock at the marina, where they are protected from storms and wind.

It’s hard to believe that living on a house- boat is not that much different than living on land, but Jennings and Celie find that their activities are largely the same as they were before they lived aboard: they go to work, go to the grocery store, have friends over. Because Jennings, who works as a software developer for an insurance company, and Celie, who helps manage a home healthcare organization, are not always on the same schedule, the couple has two options for getting to and from the mainland to their home: a kayak and a motor dinghy.

As is true of conventional home ownership, there is always maintenance to be done, always something to fix. The details, howev- er, aren’t quite conventional. Like jumping overboard in a wet suit and scrubbing the bottom of the boat. Or cleaning seagull guano from the solar panels.

Because they don’t have a lot of space—just 330 square feet—Celie and Jennings have learned to keep their belongings light. The two share a closet and have a limited ward- robe. “For me, the small footprint is not a big deal at all,” says Jennings. “There are a couple of times where you’d like to have maybe more than five shirts, but it’s not really a problem.”

The small space isn’t a problem for enter- taining either. The couple has been known to host houseboat potlucks with friends, sometimes up to 12 people. For an easy meal for a group that doesn’t require an elaborate kitchen, they’ll often do “wrap nights” (I first hear this as “rap nights” before realizing they are talking about rolled sandwiches). “I’m always shocked at how comfortable it is with that many people in here,” says Jennings. “The arched roof makes the space feel bigger and greatly enhances the acoustics.”

When I visit in early spring, the houseboat is docked in its slip at the marina, but on a summer day you’ll find it offshore, grill fired up and friends swimming off the back deck—taking the backyard barbecue to the next level. The Boley houseboat might be floating in Chauncey Creek or Pepperrell Cove, or off an island some- where; you never really know. That’s the beauty of living on a boat: if you get bored of the view, you can just change it. 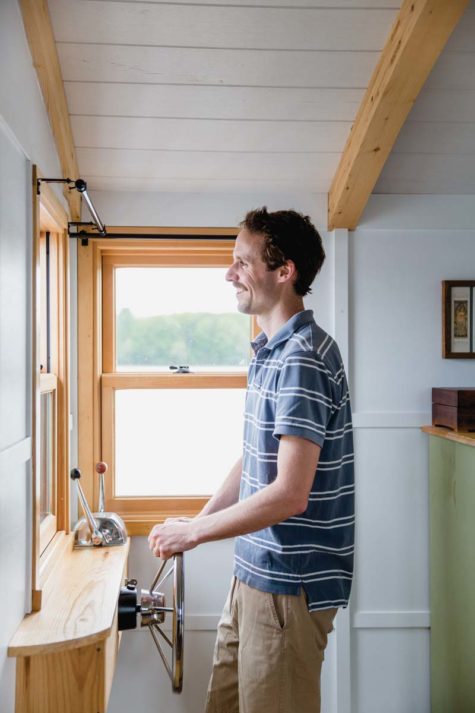 Jennings at the helm. 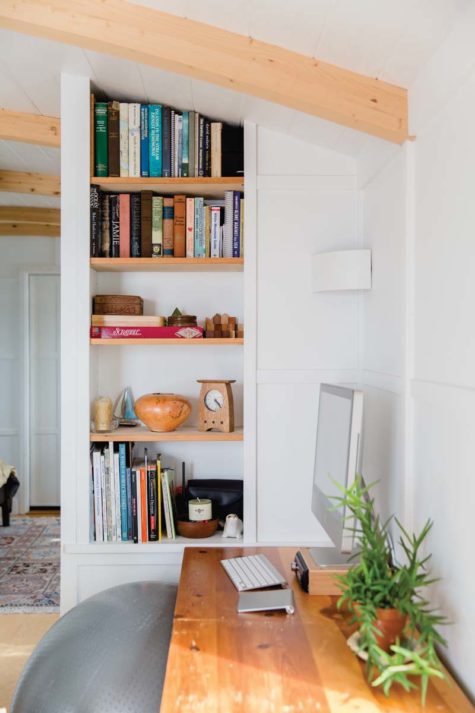 A desk sits next to several built-in shelves for a modest library. To prepare for living in 330 square feet, Jennings didn’t have too much to get rid of: a futon, a toaster oven, and a set of drums. 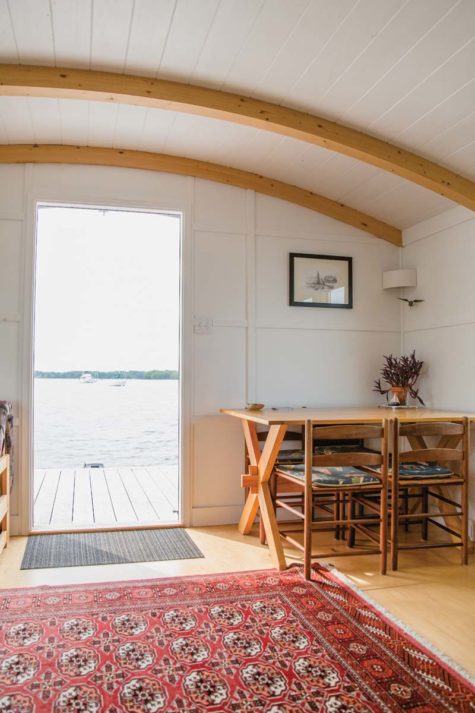 The view out the “front door” often includes wildlife spottings, such as seals, great blue herons, eider ducks, sea loons, and striped bass. “In the spring, it is neat to observe multiple mallard duck parents scooting around the protected bay with their cute ducklings in tow,” says Celie. “We get to see them grow as the season progresses.”