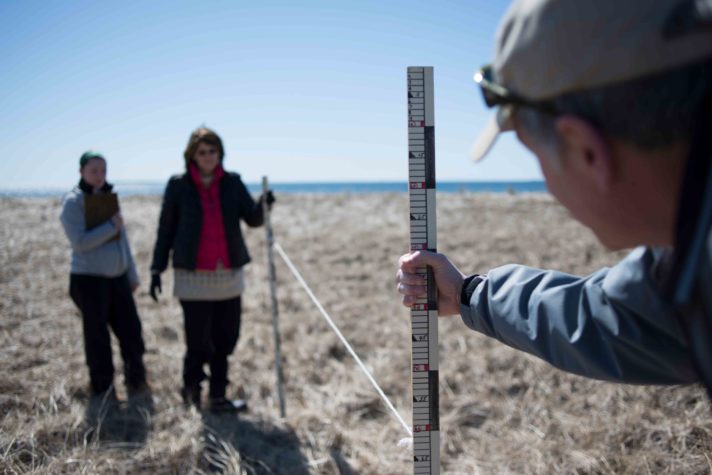 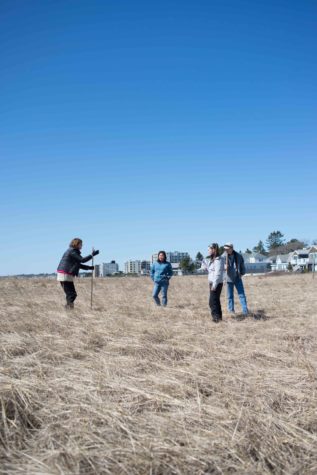 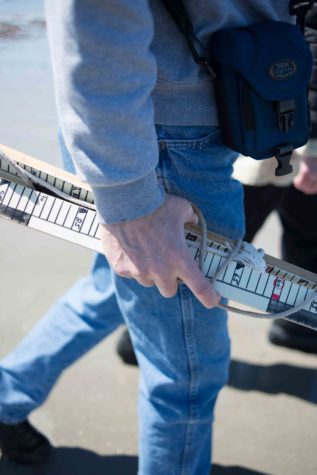 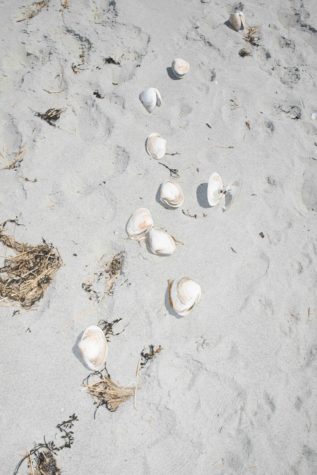 Most, but not all, of Maine’s sandy beaches are in southern Maine. 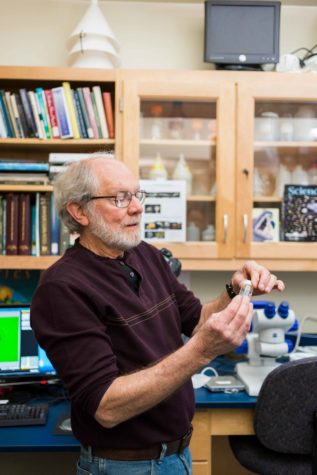 When John Zarrella heads down to Ogunquit Beach carrying two poles connected by a rope, the tourists tend to get creative with their questions. “You looking for a limbo party?” they’ve been known to ask. Actually, he’s looking for detailed information about the movement of sand. Each month, Zarrella uses the equipment to carefully measure the contour of the beach. He’s one of 115 people taking part in the Southern Maine Volunteer Beach Profile Monitoring Program, which tracks sand changes on 12 beaches from York to South Portland.

More than half of the volunteers are retirees. It’s a valuable demographic with “time, curiosity, and experience. They make great researchers,” says Nik Charov, president of the Laudholm Trust at the Wells National Estuarine Research Reserve, which coordinates the beach monitoring program in York County. The Wells Reserve at Laudholm has more than two thousand acres of protected land and trails, with access to four beaches.

Profilers take their measurements every month, year-round, rain or shine. “It requires a high level of dedication, as well as a willingness to brave the winter weather,” says the Wells Reserve’s Jake Aman, who manages the program. “I don’t come across this caliber of volunteer every day.”

The volunteers measure every three meters, from a high point on the beach down to the low tide mark. They record the measurements, which go into an online database used to evaluate the effects of storms and rising sea levels. State scientists from the Maine Geological Survey analyze and interpret the data, looking for long-term trends and changes in sand movement. Those findings are used to help local and state officials make decisions on beach management issues like designing sea walls, restoring dunes, dredging harbors, importing sand, and managing piping plover habitats.

Many of the volunteers live on or near the beaches they monitor, so “it’s protecting what they love,” says Emily Greene, the program’s volunteer coordinator at the Wells Reserve. Greene says the beach profilers are also aware that they’re participating in an important scientific effort. “They know this information isn’t just sitting on a shelf. They know they’re making a difference.”

These “citizen science” initiatives are happening all over the state. In addition to the beach profiling program, older Mainers track flora and fauna, monitor water quality, and take ground samples at various Audubon chapters, soil districts, and land trusts. In Cape Elizabeth, for example, retirees volunteering with the Cape Elizabeth Land Trust learn about, monitor, and pull invasive plants. They also band trees to prevent winter moth infestations. “They bring knowledge and commitment to their work, and they understand the importance of giving back to their community,” says the land trust’s Suzanne McGinn.

Back at the Wells Reserve, another volunteer, who is actually a retired scientist, conducts experiments in the research lab. Another takes ocean samples to make sure the beaches are safe for swimming. “Citizen scientists are a research reserve’s natural partners,” says Charov. “They’re a brigade of curious detectives, working on the mysteries of nature.”

Zarrella has been volunteering for 12 years and says one of the reasons he sticks with it is his fascination with the power and the unpredictability of the ocean. He remembers going out on the beach after a major storm, and a thousand clams were exposed because of erosion. “I thought they were rocks!” he exclaims. His profiling work showed six feet of sand had moved away in only one storm. “It was like the beach exploded with clams,” he says.

He made up his mind to save them. “I said to myself, ‘I’m gonna chuck all of them back into the ocean.’ But after about a hundred, my arm felt like it was falling off.” So he waited, and the clams moved back into the sea, all on their own. “It was spectacular,” he recalls. “I’ve always been impressed by the forces of Mother Nature. Especially the ocean.” As a volunteer beach profiler, Zarrella is able to witness those forces, up close and personal.

The beach profiling initiative began in 1999 as a short-term, two-year research project administered by Maine Sea Grant, a National Oceanic and Atmospheric Administration (NOAA) program run through the University of Maine. The project was so successful that Maine Sea Grant transitioned it to a long-term monitoring program that has been sustained for 19 years and counting. The program also prompted the Maine Beaches Conference, which brings together stakeholders such as environmentalists, shorefront property owners, volunteers, municipalities, and state officials to talk about various issues involving Maine’s beaches.

Last year, the success of the conference prompted its expansion to include seacoast New Hampshire, and similar conferences are springing up nationwide. In fact, the beach monitoring program itself, now funded primarily through municipal budgets with support from Maine Sea Grant, has been used as a prototype for other volunteer profiling programs around the country.

“There’s no way this project would happen without volunteers,” says Kristen Grant, Beach Profiling Program Manager for Maine Sea Grant. “The retiree population is absolutely critical to this program.”

Grant says the fact that many of the volunteers own property on or near the beaches they profile gives them not only a vested interest, but also a tenacity about doing whatever they can to stop erosion. Some of the properties, she says, have been in families for generations, which makes for a “strong connection to place, combined with an amazing volunteer ethic.”

Greene, the volunteer coordinator, loves hearing the profilers share memories about growing up on the beaches. “They’ll talk about what it was like back then. They’re living history books right before my eyes,” Greene says, adding that she never ceases to be impressed by their persistence and resilience. “Sometimes I look at the weather and I think I can’t even see the horizon, but they have a stick-to-itiveness that’s incredible,” Greene says. “They’re out there in all kinds of weather.”

Zarrella admits that harsh conditions, especially snow, can be challenging. But he says it’s also part of what makes the job interesting. Besides being fascinated by the unpredictability of nature, he knows the significant impact that storms can have on the beach contours.

Before he became a beach profiler, Zarrella combined his love of the sea with his interest in science as a volunteer ocean sampler. He gathered water and sent it to state scientists, who would test the samples for E. coli and other harmful substances. As a result of his efforts, a nearby construction site was shut down for polluting the water. Zarrella feels a similar sense of satisfaction knowing that his beach profiling efforts are resulting in concrete local and state action to manage and protect Maine’s coastline. Plus, he says, he enjoys the camaraderie of his monitoring teams, and the conversations they have with beachgoers. “I try to have fun with it,” Zarrella says. “People even sometimes get their dogs to limbo under the rope.” 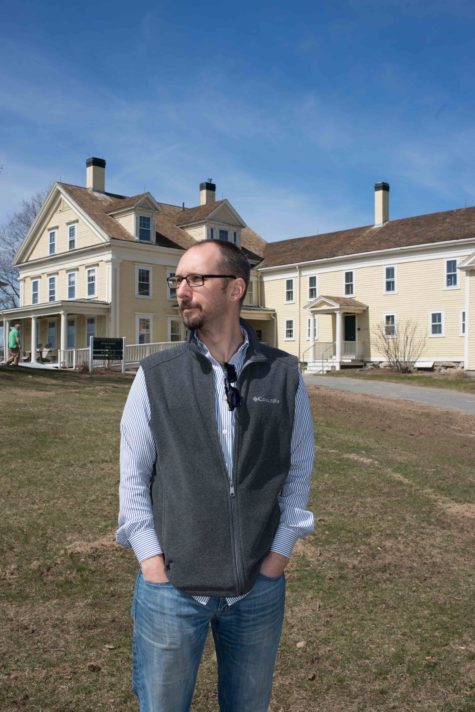 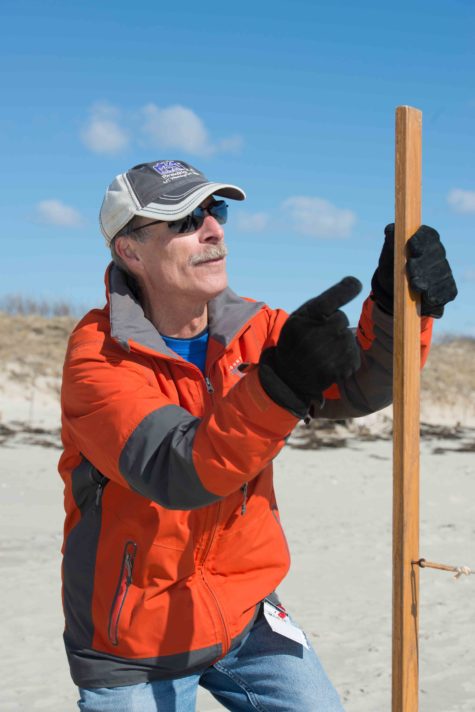 Volunteer profiler John Zarrella puts his passion for the ocean to work on Ogunquit Beach.