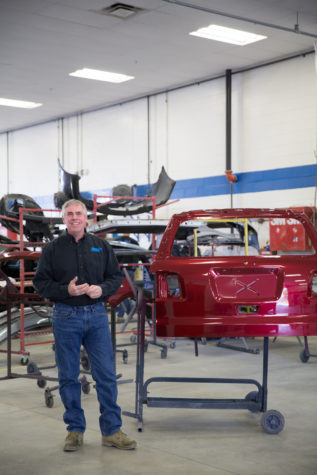 Going into his senior year of high school at the age of 17, Shawn Moody opened a three-bay garage in his hometown of Gorham. Now, nearly 40 years later, Moody’s Collision Centers, with nine locations around the state, is the largest independent collision repairer in the Northeast. Moody, who ran for governor as an independent in 2010, has remained dedicated to Gorham, raising four children there with his wife, Chrissi. As a child, Moody and his two siblings faced adversity early. When Moody was 13, his mother, Ann, was hospitalized, forcing the family to move out of its home and into a trailer park. “That humbling experience motivated me to provide a better life for her and our family,” Moody says. As the business grew, Moody and his siblings saved up enough money to buy their mother a home and move her back to Gorham. Moody shares the company’s success with his co-workers. He established a profit-sharing program in the 1990s that gives 10 percent of the company’s after-tax profit to its workers. Through the company’s employee stock ownership plan, established in 2003, co-workers own 34 percent of the business. “Whether it’s your family, friends, or community,” Moody says, “when you put others ahead of yourself, work hard, and are willing to sacrifice, you will be successful beyond your dreams.”