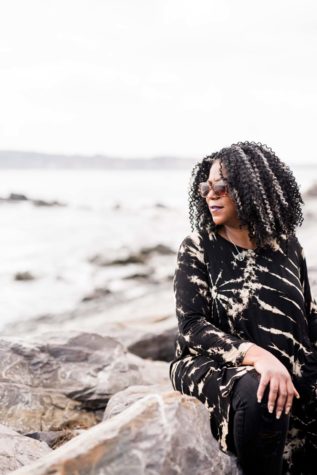 When Shay Stewart-Bouley moved to Maine from Chicago, she found the “very white space” to be jarring. To talk about her experience as a person of color in the state, she started a blog, Black Girl in Maine. “In creating a space for myself, it has become something much larger,” she says. “The conversations that my work sparks are well overdue, not just in Maine, but nationally.” Stewart-Bouley splits her time between her home in Maine, where she writes, and her day job in Boston, where she leads Community Change Inc., a nonprofit focused on anti-racism efforts. For Stewart-Bouley, calling out racism and working to end it is what motivates her work. “All of my work is centered on anti-racism, because racism is America’s original sin, and we are still living with it,” she says. “We are only just starting to wake up to the fact that racism is not just about personal feelings; it is woven into the fabric of this nation.” In addition to writing for her blog, Stewart-Bouley writes about race for a number of other publications. She has been named the best Portland blogger by Portland Phoenix readers and has received a New England Newspaper and Press Association award for her work. This year Portland Phoenix readers named her blog the best media publication in Portland. Stewart-Bouley says her work is her life and that the urgency of the issues she fights for keep her engaged. “I believe this state has much to offer as far as quality of life, but it must be safe for all—that is what keeps me in this work.”