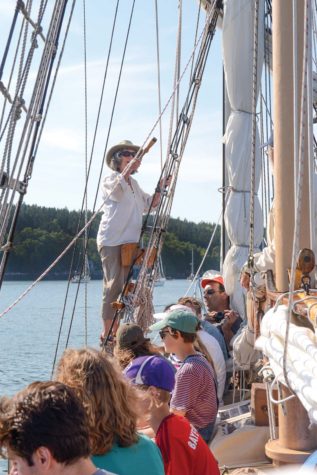 A beloved element of the Sweet Chariot Music Festival is “Shanties on Shipboard,” led by folksinger and captain Daisy Nell (standing), aboard her 32-foot brigantine, Redbird, as it travels through Burnt Coat Harbor on Swan’s Island. 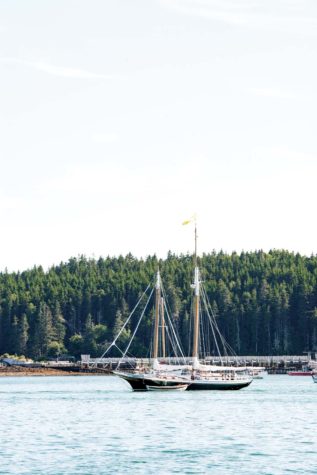 One of several schooners to visit Swan’s for the festival, Serenity is owned by Maine art consultant June LaCombe and her husband, Bill Ginn, global initiatives director for the Nature Conservancy. 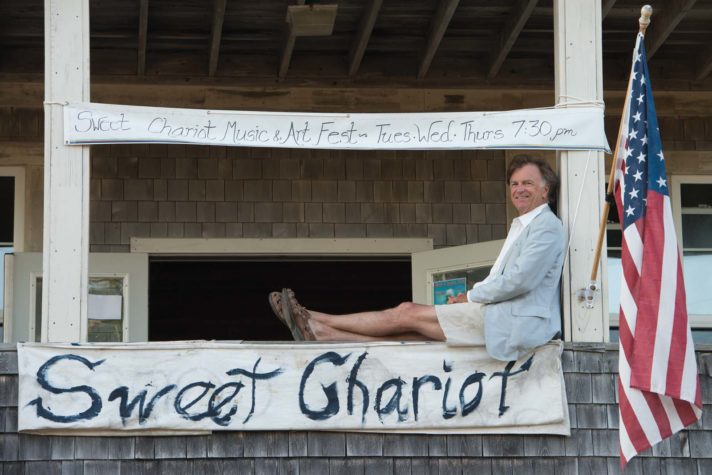 Sweet Chariot founder Douglas Day on the porch of the Odd Fellows Hall, where festival musicians perform to sold-out crowds. 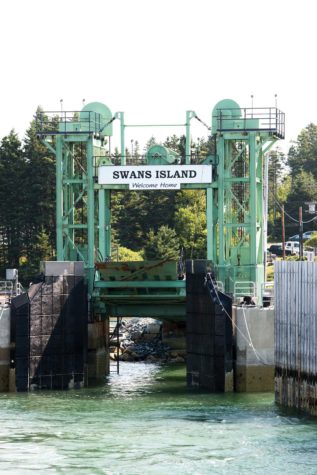 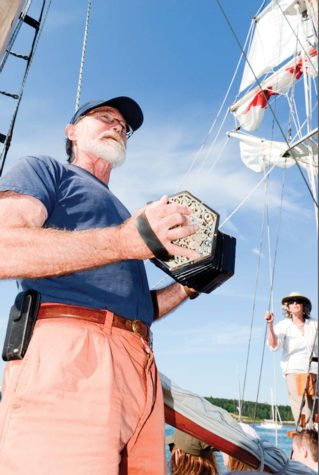 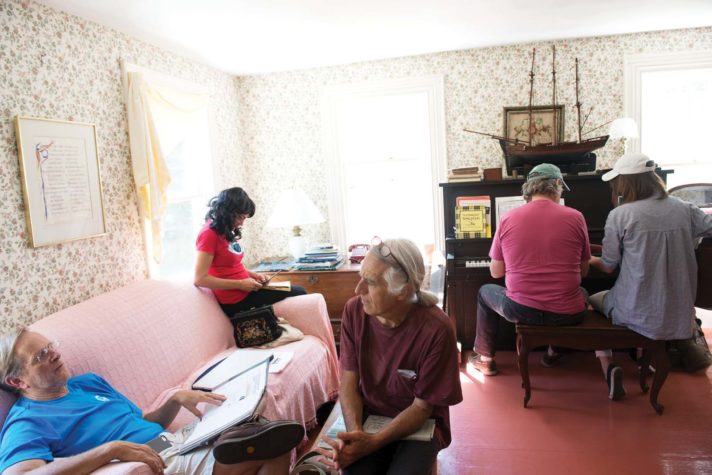 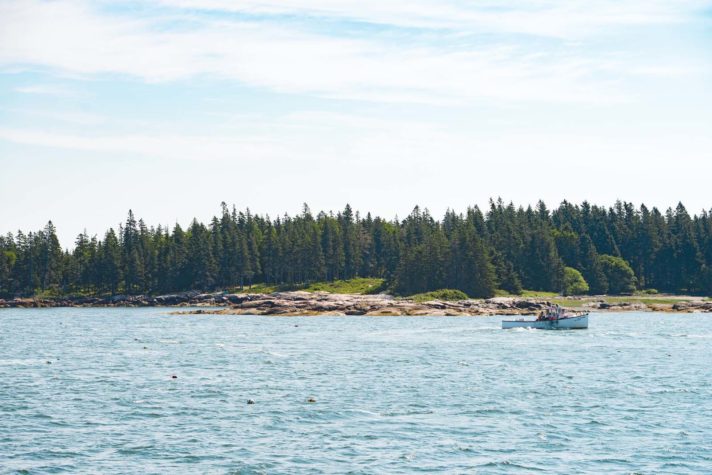 Lobstering is the primary occupation on Swan’s Island. 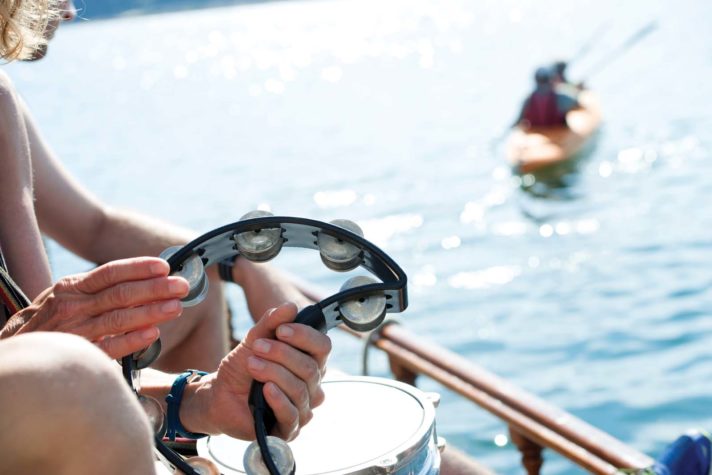 The sea shanty singers were accompanied by drums, tambourines, and a squeezebox. 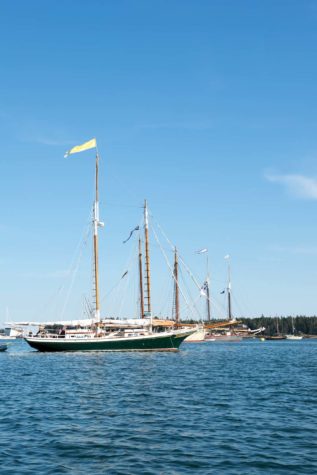 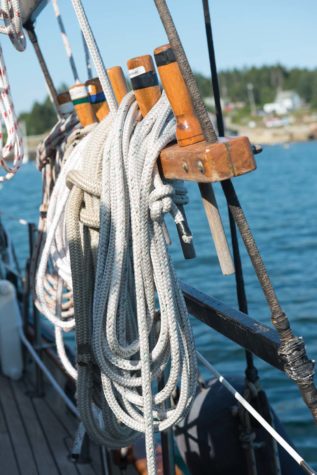 Rigging on the Redbird is old school. 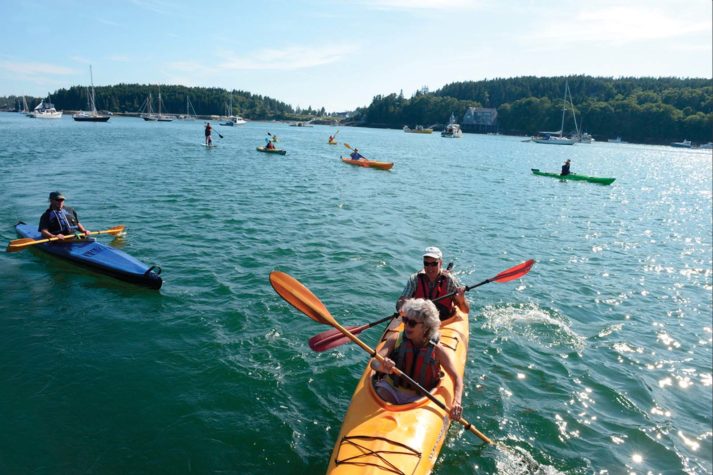 Afterparty hosts Mike and Gina Wilson are among the kayakers following the sea shanty singers. 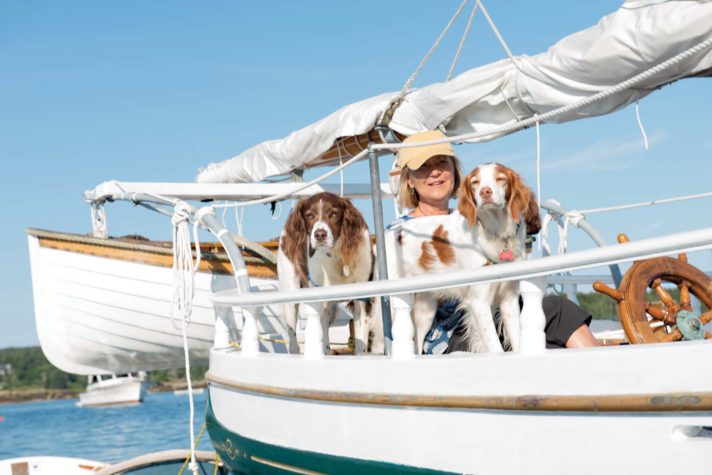 June LaCombe relaxes with her pups in the stern of her schooner, Serenity. 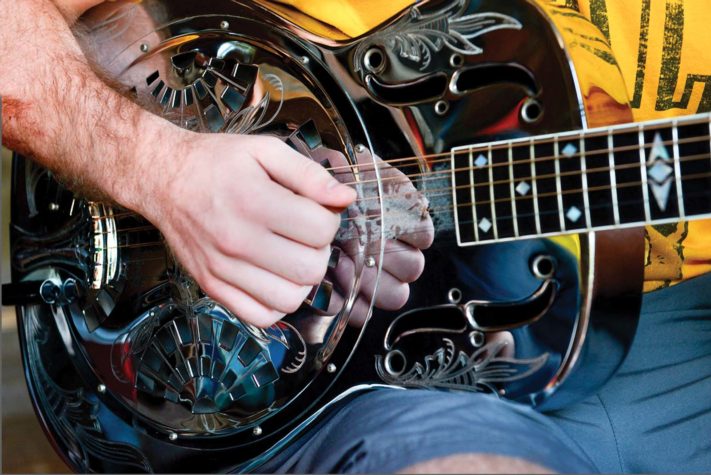 Cody Gibson of the Morningsiders plays the dobro. 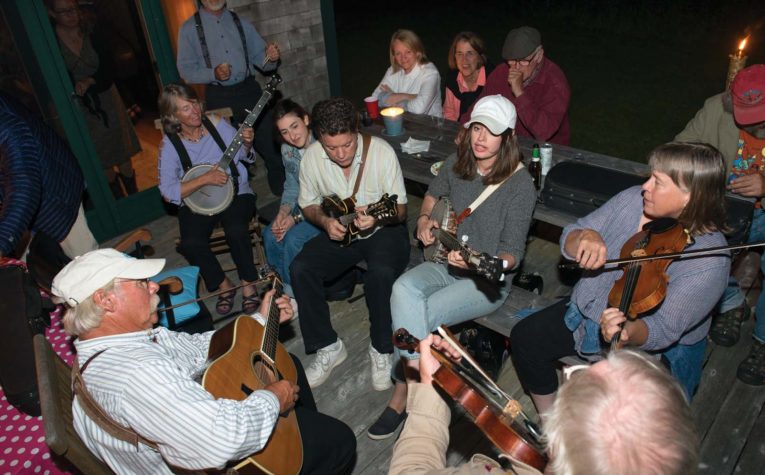 Following the evening’s concert, musicians jam on the deck of Mike and Gina Wilson’s home until the wee hours of the morning. From left: Stan Collinson on guitar, Daisy Nell, Julia Bailen, Eric Kilburn on mandolin, Stephanie Jenkins on banjo, Bob Lucas on fiddle, and Ellen Gawler on fiddle. 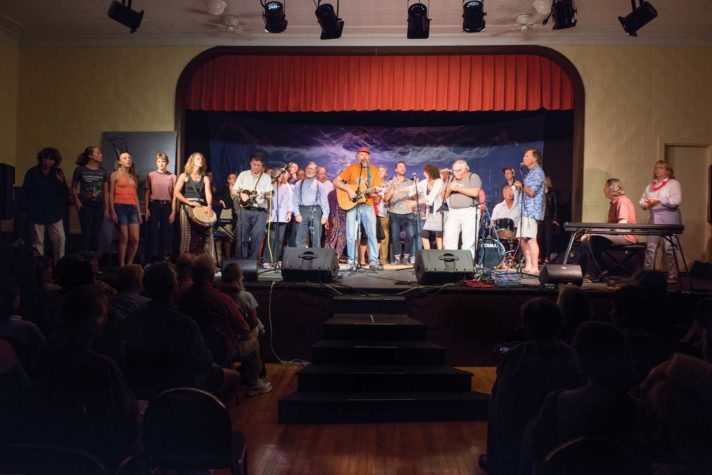 Guitarist Dean Stevens, center, leads the performers in a “final hippie hymn” to close out the evening’s concert at the Odd Fellows Hall.

Singing Out to Sea

Year after year, musicians and sailors return to Swan's Island for the Sweet Chariot Music Festival.

From in and around the old white farmhouse on Swan’s Island, a melodic hum floats on the warm August Breeze. A fiddle player lounges in the grass, picking out a tune, while someone naps in a hammock on the porch. Inside, the remains of a cold buffet lunch are on the kitchen island, and a group of singers is clustered around an upright piano in the front parlor. In the barn, two young men perch on milk crates—one strumming a dobro, the other a standard guitar—jamming with banjo player Bob Lucas as he sings the refrain of what I later learn is a North Carolina bootlegger’s song: “And the lamb will lay down with the lion, after drinking that old moonshine.” I finally locate the owner of the house, host of the afternoon’s rehearsal and the reason for our visit to the island: Douglas Day, founder of the annual Sweet Chariot Music Festival. For 25 years, Day has done the heavy lifting to put on the three-day event, which draws musicians from across the country to this remote island off Bar Harbor.

“Come into my office,” Day says with a grin, ushering me into a plastic chair under an apple tree while he sprawls in a wooden wheelbarrow. In our email exchanges, he nearly tried to discourage us from coming to the festival, warning us that there was no guarantee that we’d get our car on the ferry from Bass Harbor (we did), and that overnight accommodations are scarce (we were lucky enough to secure a room on the third floor of the Griffin House, which offers a spectacular view of Burnt Coat Harbor). For its relatively large size and proximity to the mainland—six miles—Swan’s is short on amenities. There are no hotels, restaurants, or even places to camp, just a handful of rooms at bed and breakfasts and one small but well-stocked general store (which does not sell alcohol), with an adjacent snack shack. Working with a $25,000 budget, about half from subsidized ticket sales and half from modest gifts, Day makes arrangements for the 30-plus performers to be housed in private homes. Many of them have been part of the festival for years and see their annual visit as more of a vacation and a chance to play together than a working gig. “The best audiences for musicians are other musicians,” Day says. Less a promoter than a facilitator, he admits that keeping the festival going is a challenge, even though every year he has to turn away dozens of performers who want to participate. “Most festivals that really have legs last 20 or 25 years,” Day says. “It’s difficult for Sweet Chariot to grow given the limits that the remote location impresses upon us.”

The majority of festival attendees are island residents, and the rest arrive by boat, notably  members of Maine’s schooner fleet, which include Swan’s Island on their schedule of overnight stops during festival week. At $20 per ticket, three nights of performances at the island’s 225-seat Odd Fellows Hall always sell out. The other, especially charming festival event—sea shanties sung from a square-rigger sailboat as it wanders around Burnt Coat Harbor—requires some way of getting out on the water, even if it’s in a kayak.

“The remoteness contributes to the soulfulness and the magic of it,” says Mike Wilson, joining us under the apple tree. “It wouldn’t be the same if you did it over in Southwest Harbor.” Wilson, a Connecticut resident who hosts one of Sweet Chariot’s famous afterparties with his wife, Gina, owns a house on Swan’s because of the festival. “We came here as renters and went to the festival and were smitten,” he says. “After the first show, my friend who introduced me to it all said, ‘You like the show? Well, I hate to tell you, but the best music is really at the afterparties, but they’re private.’ I said, ‘Do you think you can get me in?’ We went to an afterparty and were blown away by what we experienced.” The Wilsons ended up buying the house where the party was hosted, and they continue the cherished tradition, with one noteworthy addition. “My wife’s a piano player, so now we have a piano on the island,” Wilson says. “Then we have the acoustic stage outside on the back deck with the banjo players and the fiddlers and the mandolin players; they can carry on up to two or three o’clock in the morning. It’s absolutely wonderful.”

Day calls out to Lucas, strolling out of the barn with his banjo, to contribute to the conversation. “Every year we draw from each other’s collective juice, because it takes a lot to get here—time, money, energy, organization,” says Lucas, who lives in Ohio and has traveled to the island with his wife, daughter, and baby grandson. “Others, like Bob [Lucas], have put serious currency in the soul bank to make this happen,” says Day. “Because soul matters so much to us artistes,” Lucas replies, chuckling. “If you ain’t got soul, you ain’t got nothing. Now we got to go sing on a boat.”

The rehearsal gradually breaks up, and we meet an eager group on a dock in Burnt Coat Harbor, where the 32-foot brigantine Redbird is tied up. The ship’s owner and captain, Daisy Nell, and her partner, Stan Collinson, known as Captain Stan, invite us aboard. Both are musicians from Massachusetts, where Nell founded the Gloucester Schooner Festival. I recognize the two guitarists who were playing with Lucas in the barn, Magnus Ferguson and Cody Gibson; together with fiddler Reid Jenkins they make up the Morningsiders, one of the newer groups to join the festival. (Jenkins, however, is a second-generation participant; along with his parents, Richard and Sandy, and sisters, Stephanie and Cassandra, he has performed at Sweet Chariot since he was a child.) As soon as we pull away from the dock, Nell leads the group into their first shanty, “I thought I heard the old man say, John Kanaka-naka-tu-lai-e,” accompanied by a drum and tambourine. We glide past the crew and passengers of two schooners, the American Eagle and the Lewis R. French, and weave through other boats at anchor, including the schooner Serenity, owned by Maine art consultant June LaCombe and her husband, Bill Ginn, the global initiatives director for the Nature Conservancy. All the while a band of smaller craft—kayaks, paddleboards, and a little gaff rig dinghy— trails us like a flock of ducklings. Standing amidships on the Redbird, Geoff Kaufman, who runs the annual Sea Music Festival at Mystic Seaport in Connecticut, pulls out a squeezebox and launches into a rousing version of “Strike the Bell,” with everyone chiming in mightily on the chorus. We wrap up the magical experience with Harry Belafonte’s “Day-O” as Nell steers the Redbird back to shore.

A short while later, we arrive at the Swan’s Island Odd Fellows Hall, which is festooned with hand lettered banners announcing the festival. We’ve been invited to join the musicians for a pre-performance dinner, prepared by a brigade of volunteers. It seems as if everyone on the island contributes to the festival in some way, by housing performers, cooking, or driving the school bus that brings schooner passengers and island residents to the hall for the evening shows. Dinner is a colorful buffet of baked cod, red beans and rice, coleslaw, corn, and mango and black bean salsa, followed by one more rehearsal before ticket holders arrive. In the second-floor performance space, local artist Buckley Smith has started painting a mural on a piece of canvas stretched across the back wall of the stage; he will continue to add to the piece, which depicts this year’s festival theme—gypsies and mermaids—as part of the evening’s performance.

The hair stands up on the back of my neck as the concert opens with a Mardi Gras-esque procession, led by Richard Jenkins on the trumpet. Kaufman swaps boisterous sea shanties for a melodic ballad, accompanied by Eric Kilburn (who is also the festival’s sound engineer) on mandolin. Day sings Leonard Cohen’s poignant “So Long, Marianne” with a gaggle of his children and their friends. After intermission, David Dodson comes out on stage as Frank Sinatra for a hilarious version of “I’m Glad I’m Not Young Anymore,” followed by an ensemble performance of the Beach Boys’ “Surfer Girl” with singers dressed as mermaids. Sweet Chariot first-timers Bailen—a New York band comprised of three siblings, Daniel, Julia, and David Bailen, plus their friend Pierre Piscitelli—join the Morningsiders and Stephanie Jenkins for Amy Winehouse’s “Valerie,” and the soulful yet rock-the-house rendition gives me chills. All the performers gather on stage to finish with what Day calls a “final hippie hymn,” led by Dean Stevens and inspired by the words of Dr. Martin Luther King, Jr.: “Oh children, don’t you weary. Walk together; believe in the dream. When the way gets rough, we’ll make a new way. Let justice roll down like a mighty stream.” By the end, I’m one of many in the crowd clapping, swaying, and singing along at the top of my lungs.

Afterward, the musicians chat with guests as they browse a small art show on the first floor of the hall. “Wasn’t that a hell of a party? There were fiddles and banjos and way too many guitars,” says Dodson, laughing. “The word I keep thinking of is heartwarming,” says LaCombe. “When Doug brought his kids out—I’ve seen those kids since they were little.”

The night air is soft, but it’s dark on the island, so we’re grateful for the trail of candlelit luminaries lining the Wilsons’ driveway to guide us to the afterparty. Just as Wilson described earlier that afternoon, there are musicians around Gina’s piano and on the back deck jamming, smiling, connecting, and relishing the time together. The hum we heard earlier at Day’s home has risen to a river of sound, sweet and precious. We know, hearing it, that we’ll figure out a way to return. 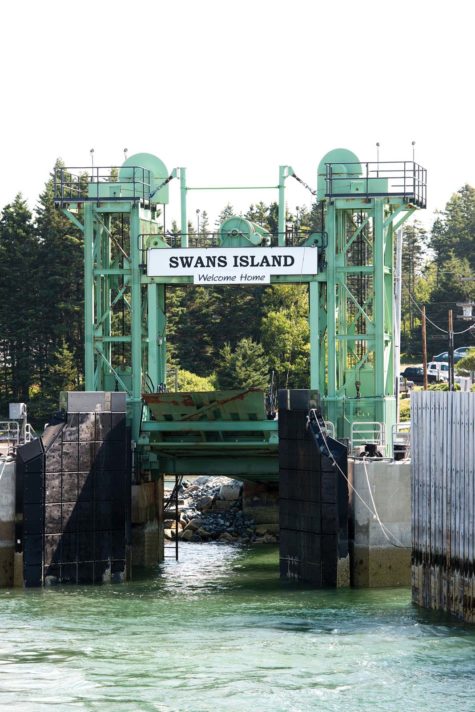 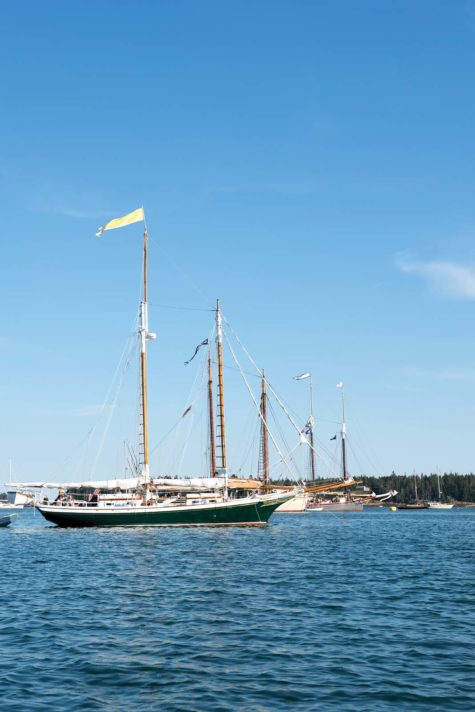 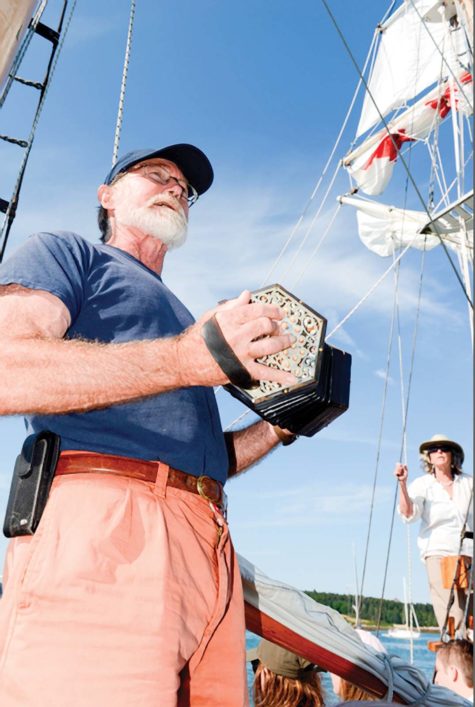 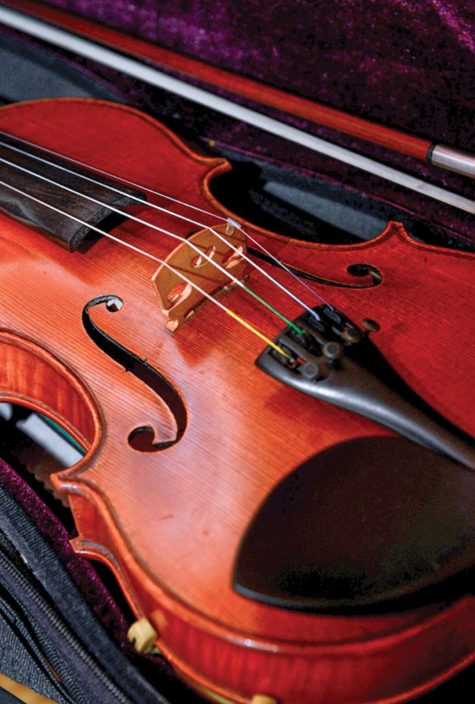