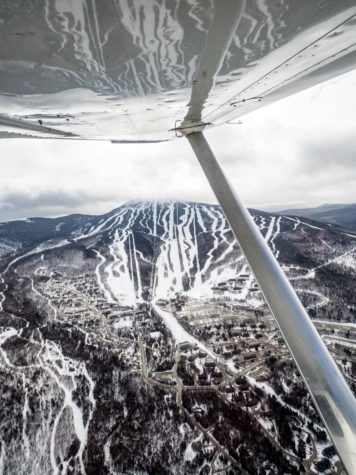 Under-the-wing view of Sugarloaf from up in the sky. 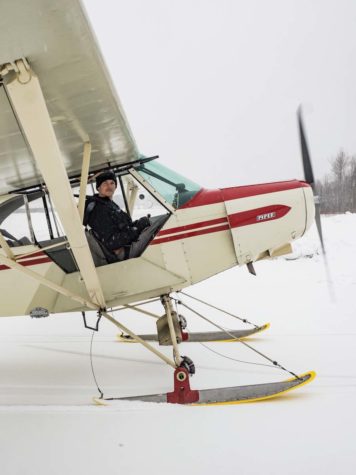 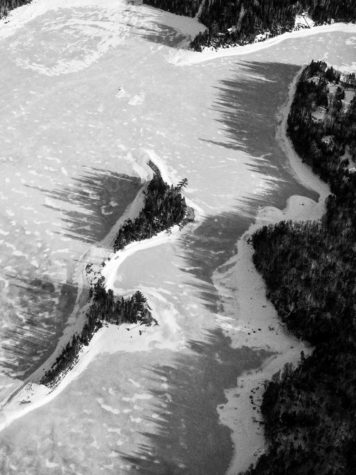 Crackling ice and snowdrifts on the shores of Flagstaff Lake. 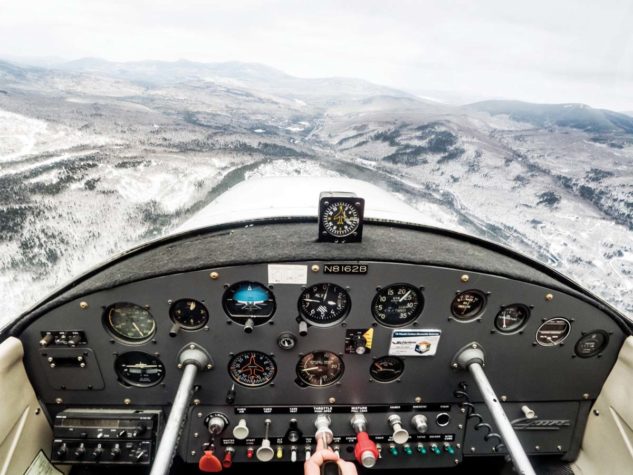 Looking out from the cockpit in the Cessna 172, a view that Sawyer Fahy describes as “the front of the world.” 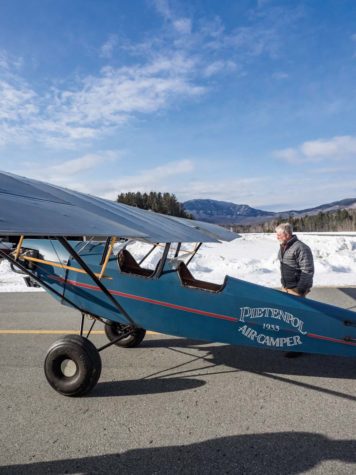 Tom Fahy of Carrabassett built this classic plane from a kit in the 1980s. 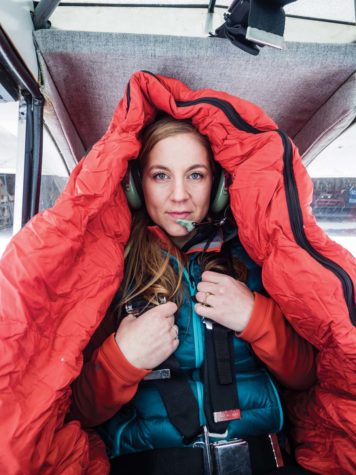 Several months after our winter flights, Stephanie Schwartz (at right; now Stephanie Fahy) and Sawyer Fahy wed in a ceremony at the Carrabassett Valley Regional Airport. Their invitations were folded into paper airplanes, and Sawyer arrived at the airstrip in the Piper Super Cub. 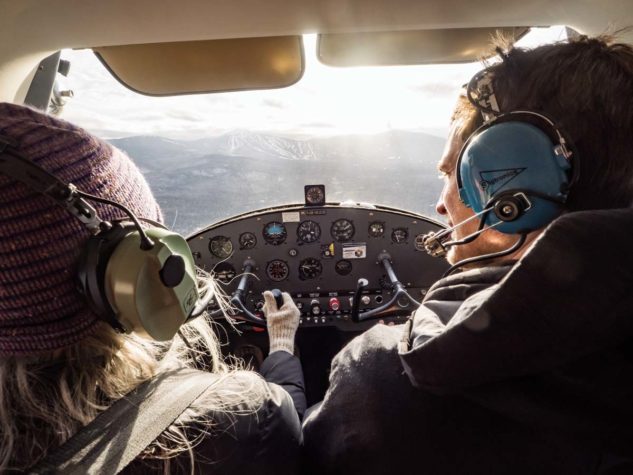 With the slopes of Sugarloaf ahead in the winter sunlight, Sawyer Fahy of Sugarloaf Aviation coaches a new student in the art of flight. 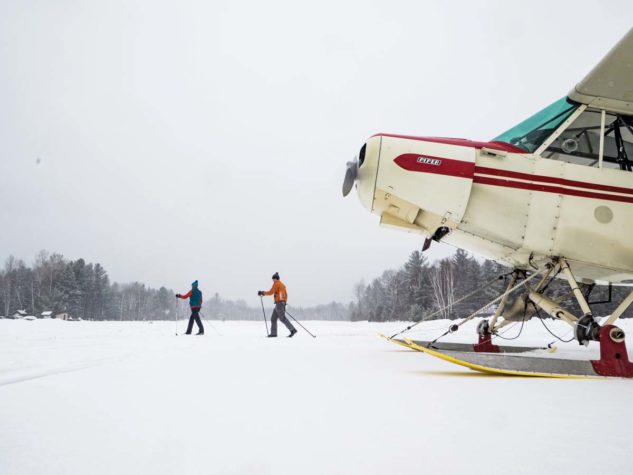 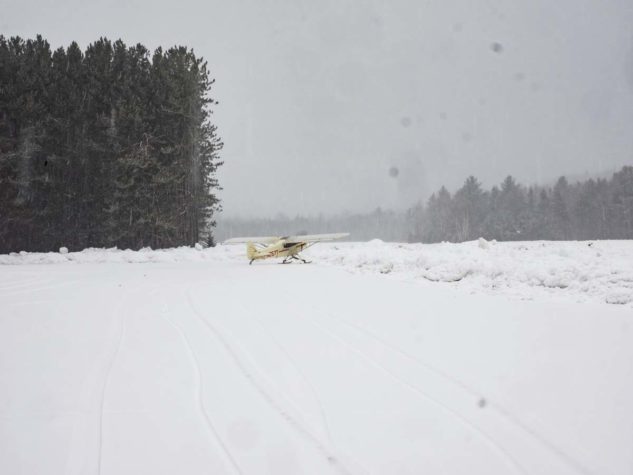 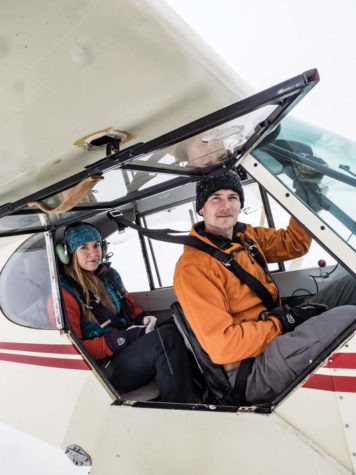 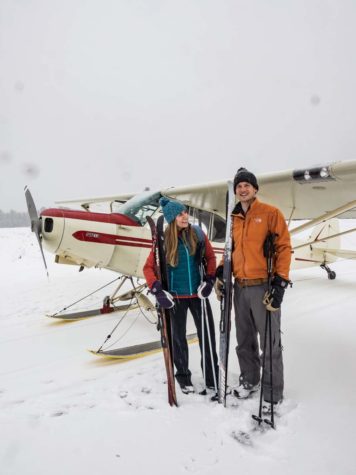 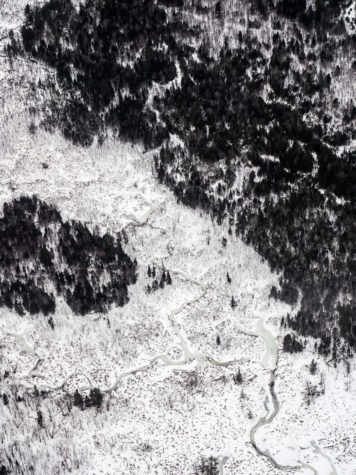 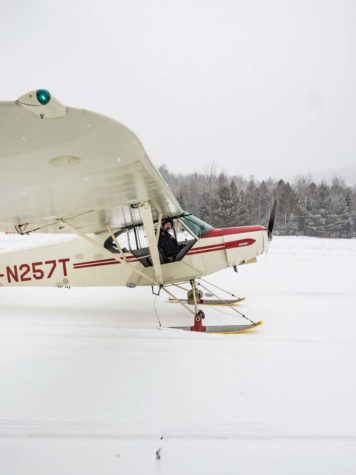 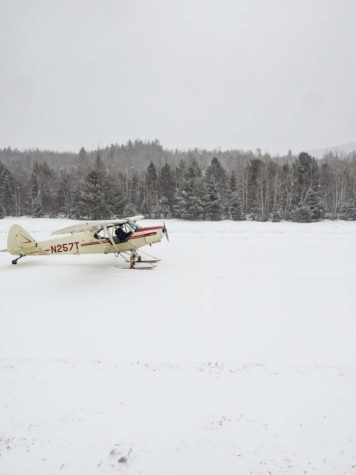 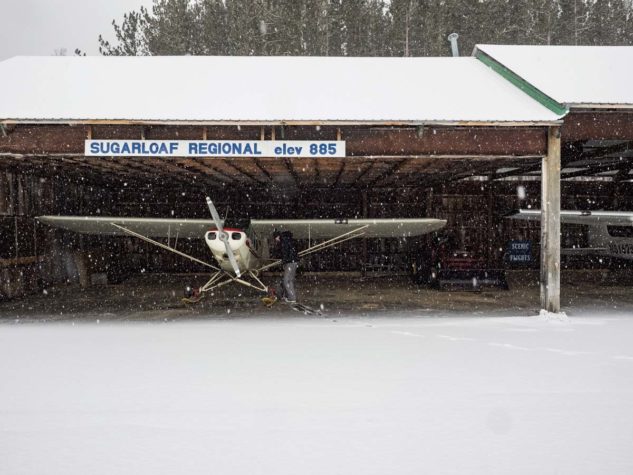 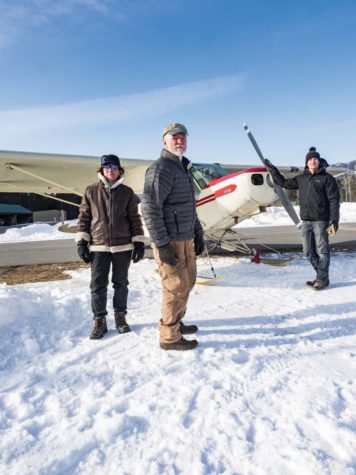 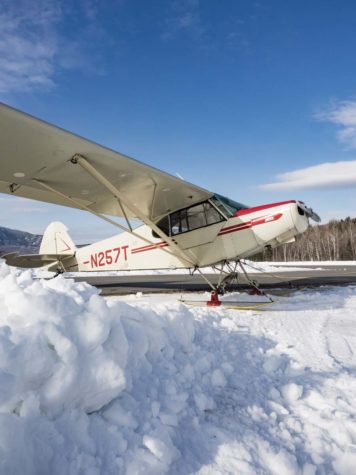 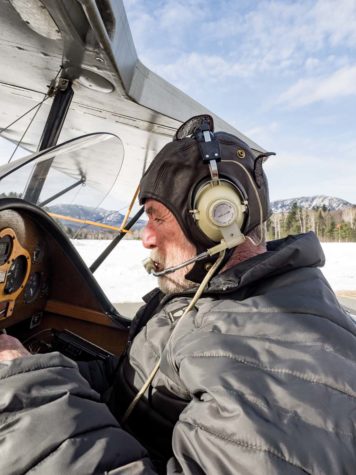 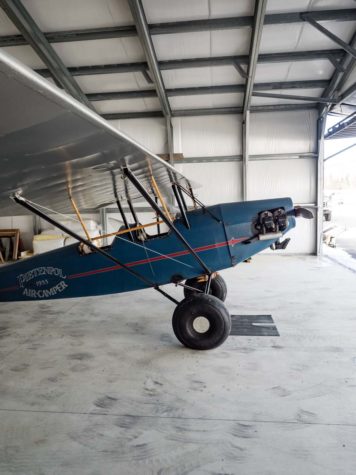 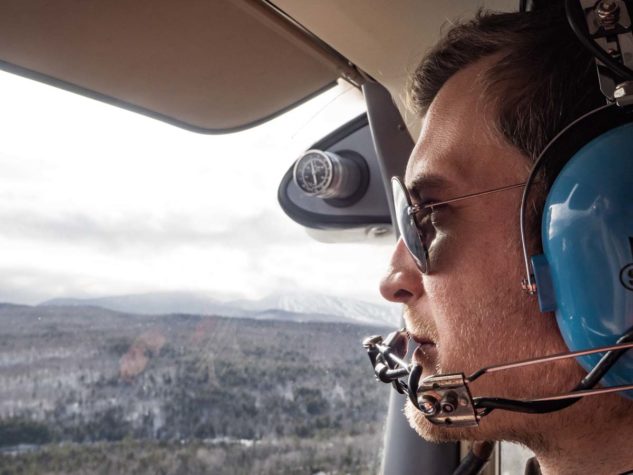 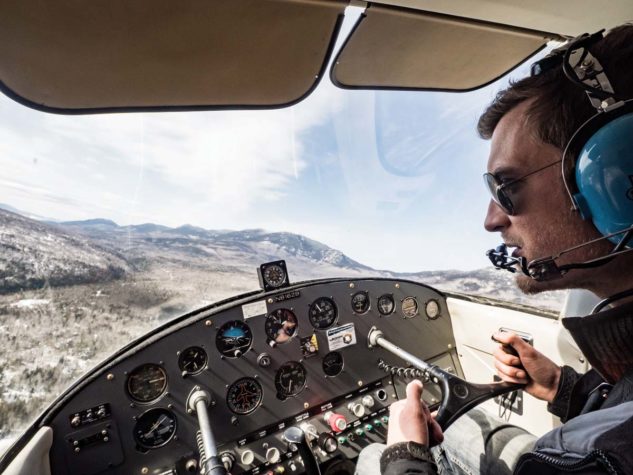 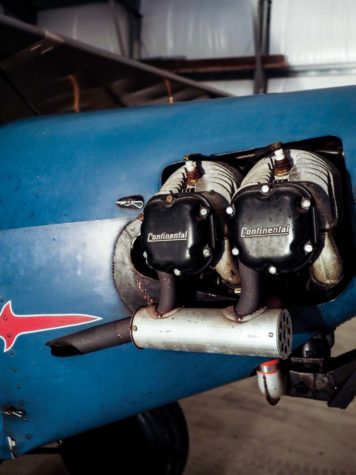 On a couple of winter days, we're in the cockpit with the young pilot who founded Sugarloaf Aviation last year.

The Carrabassett Valley Regional Airport is directly off the road to Sugarloaf, Route 27, near the icy flow of the Carrabassett River. There’s no control tower here, just one paved runway nestled in a clearing in the woods at an elevation of 885 feet. The doors of the garage-sized hangars that line one side of the airfield are closed on the bright winter day I arrive, and there are no planes on the runway. No other people are around.

In a few minutes, I hear the hum of an engine; a plane is coming across the western Maine mountains. It’s a white 1957 Cessna 172, a classic. More of these four-passenger, 27-foot- long aircrafts have been built than any other model, and Sawyer Fahy uses his for flights with all beginning learn-to-fly students.

At 32, he’s been a ski racer, ski coach, and physics teacher, and last year he established Sugarloaf Aviation to offer flight instruction, aircraft rentals, and scenic flights from this rural airport near Kingfield. Western Maine’s mountain topography and what he describes as “edge-of-the-wilderness” scenery are what’s special here, he says when I call to arrange a flight, along with landings on remote airfields and, with floats or skis, on water or snow. This is rugged, mountain flying, he explains, in planes that go low and slow and can land in hard-to-reach places.

After the small plane rolls to a stop, I meet Fahy in person. He’s tall and lean with a scruff of beard—when he flashes a smile, I think he looks a bit like Justin Timberlake. We hop in the plane with me in the front seat next to him. Peter Frank Edwards, our photographer and a longtime aviation dreamer, had his turn to fly on the way over and takes the backseat. I’m planning to simply be a passenger for a scenic ride, but after Fahy’s gotten the plane cruising above the Bigelow Range, he shows me how to operate the yoke and throttle. Suddenly, unexpectedly, with afternoon sunlight streaming into the cockpit and views of ski slopes below, I am flying an airplane.

Fahy suggests a turn here or lifting the plane’s nose there, and makes sure I stay on track. He is a calm and confident instructor, and the weather conditions are gentle. (This is a learners’ airplane, and he has a full set of controls in front of him, too.) We fly toward Sugarloaf and over the town of Stratton and the frosty shorelines of Flagstaff Lake. I don’t feel the sensation of speed. It’s more like peaceful floating up here at 95 miles an hour. We’re all wearing headphones, and I hear French spoken on the plane’s radio. I savor every minute of guiding that plane. From the backseat, Peter Frank is already talking about getting an aviator’s logbook and booking more lessons for himself.

Fahy notes that so far, most of Sugarloaf Aviation’s students are local residents who’ve always wanted to learn to fly, and maybe even own a plane. Other customers are visitors looking for a chance to fly in the rugged environment; conditions here are often compared to what’s found in Alaska, he says. One of Fahy’s students is Chip Cochrane, the longtime ski racing coach at Carrabassett Valley Academy, who was a U.S. Ski Team member in the late 1970s and early 1980s, and is an owner and guide of Allagash Canoe Trips. Cochrane recently bought his own Cessna, and he needed to learn how to operate it. “Chip coached me in ski racing at CVA,” Fahy says, “and now I’m teaching him how to fly.”

When we touch down—Fahy takes the controls for the valley landing, of course—we see that his father, Tom Fahy, and his mother, Faron Fahy, have arrived at the airport to greet us. Faron was the first in the family to live in Carrabassett Valley. Originally from Pennsylvania, she grew up in a skiing family, attended Colby College, and stayed in Maine to keep skiing. Tom moved here from New York, also to ski and coach, and “when I had a few dollars burning a hole in my pocket, I started flying,” he recalls. We all walk through the unheated hangars to see the Fahys’ three planes, including a 1953 Piper Super Cub that is one of the Sugarloaf Aviation fleet and is outfitted with skis for the winter season. Sawyer describes this nimble type of aircraft as the “ideal, two-seat bush plane.”

Sawyer’s skills and passion for flying are practically a birthright. His parents met in Carrabassett Valley in the 1970s at Sugarloaf. In the 1980s, Tom Fahy built the experimental airplane, a Pietenpol Air-Camper, that the whole family would learn to fly. Sawyer was five years old the first time his father took him up in the two-seat, open-cockpit Pietenpol. We take a look at this plane, too, which is parked in the next bay. Largely built of wood, it reminds me of a life-sized model airplane, with the craftsmanship of a fine wooden boat.

Tom inspired his children with his love of flying. He’s a cabinetmaker by trade, and he used local spruce for some of the wooden components of the plane that he built from a circa-1929 kit (modified in 1933). Tom and Sawyer recall how they once flew the Pietenpol all the way to Wisconsin for an aviation gathering there. Sawyer was in middle school, and they packed a tent and other gear and camped along the way. I ask if the trip was pivotal. At the time, Sawyer says, aviation was such a natural part of life that he took it in stride. “By then,” he says, “I knew I’d find a way to make flying a bigger part of my life.”

Both Sawyer and his sister, Whitney Fahy, came up through the ski racing programs at CVA and Bates College. He went on to fly for a shuttle service out of Rangeley and to teach physics at CVA. Whitney, meanwhile, earned her pilot certificate after college and she taught beginning flight instruction at Twitchell’s Airport and Seaplane Base in Turner before becoming a commercial pilot for regional airlines operating out of Denver, Colorado. After my flight with Sawyer, I talk with Whitney by phone and she recalls some of her earliest memories flying in the Pietenpol. “Growing up, if it was a beautiful day, the first thing my dad would say was, ‘Let’s go flying.’”

Whitney says her brother is a wonderful teacher—from teaching physics and coaching ski racing to his flight instruction and founding of Sugarloaf Aviation. Whenever anyone new sits up front with him in the plane, she says, he’ll get them to at least try to fly it. (Through his teaching and coaching experiences, he says he’s learned that it helps a great deal to “always be even-keeled, even when you’re having a bad day.”) Whitney returns to Maine regularly, and even though she is an airline captain who flies bigger planes into much larger airports, she says she always feels fortunate to be able to fly from Carrabassett Valley. “I thought flying out of Sugarloaf was normal, but it is a very unique airport,” Whitney explains. “You might take off in the Pietenpol and get over the ridgeline, and then the winds are stronger than you thought.

Also, if you fly high enough, you can see Mount Washington.”

Overnight, a squall comes in, bringing fresh snowfall to Carrabassett Valley. I see the lifts are running at Sugarloaf. I’m hoping to ski later, but first, we meet Sawyer again. This time his fiancée, Stephanie Schwartz, joins us. She works as a physical therapist in Farmington, and Sawyer notes that while she’s not (yet) interested in solo flying herself, she has a history of flying in her family, too. Her grandfather was a flight instructor in World War II.

The couple has their cross-country skis with them, and they’re getting the Piper Super Cub ready for a flight. I notice a sleeping bag, and Stephanie says she’s learned to bring one along as an extra layer of warmth for their chilliest flight excursions—and they sometimes stop for a picnic. For now, they’re getting the plane ready, taxiing on the runway as a warm-up, and watching the conditions. If the snow continues, they’ll stay on the ground.

Meanwhile, Stephanie shows me a batch of the couple’s handmade wedding invitations. Before putting each one into an envelope, she’s folding it into a paper airplane, using the edge of a butter knife to create the creases. The wedding is to be at the Carrabassett Valley Regional Airport, with the vintage planes and the Bigelow Range as a backdrop. Depending on the weather, a flying entrance may be involved. “He loves his planes,” she says, with her own ready smile, as she watches him get the Piper ready to fly.

The vintage plane’s mustard-yellow skis stand out against the sudden whitewash in Sawyer’s hometown valley. This couple is literally just getting things off the ground with Sugarloaf Aviation. As the snow falls softly, Stephanie grabs a wing and helps Sawyer to push the plane from the hangar. 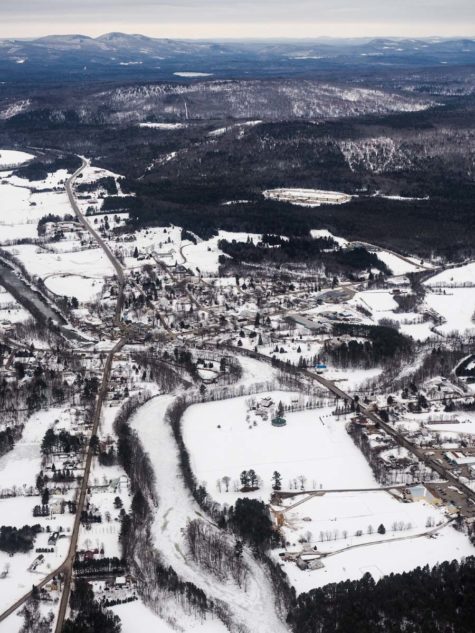 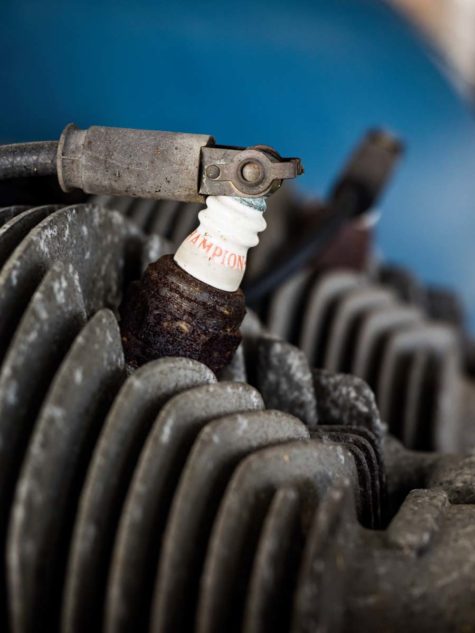 An old Champion spark plug in the engine of the Pietenpol Air Camper. 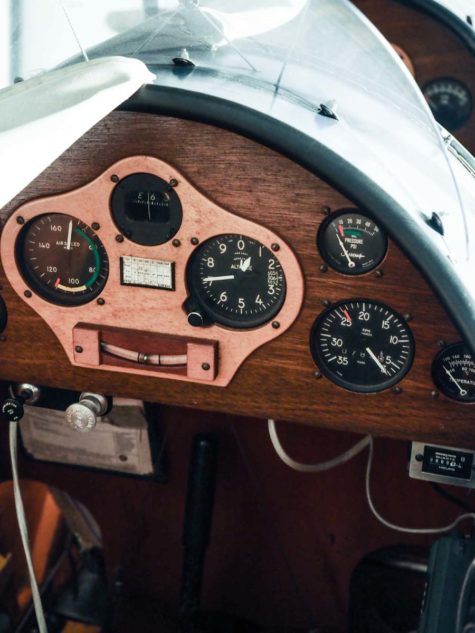 The handcrafted wooden dash in the Pietenpol. 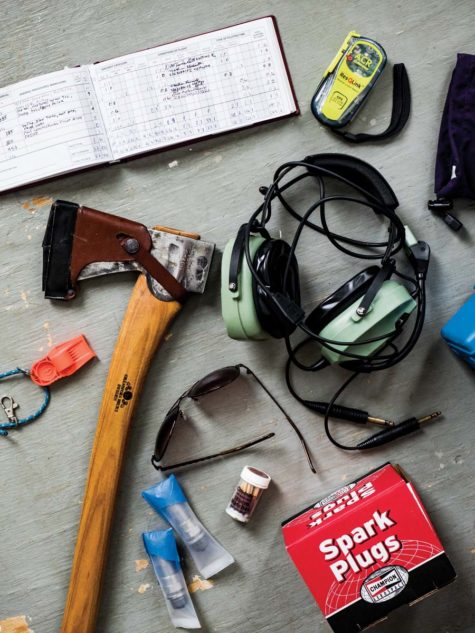