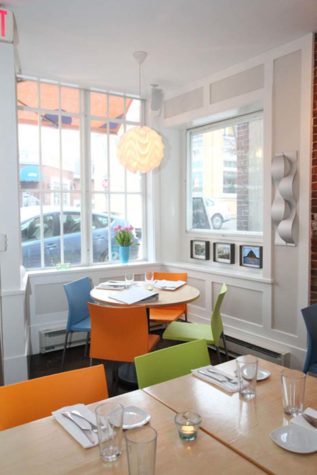 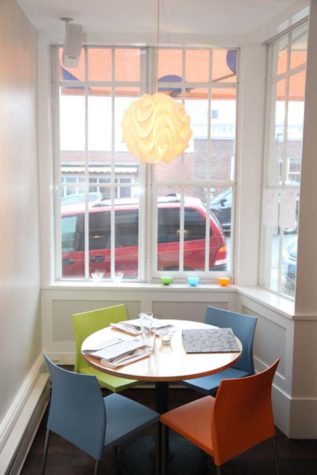 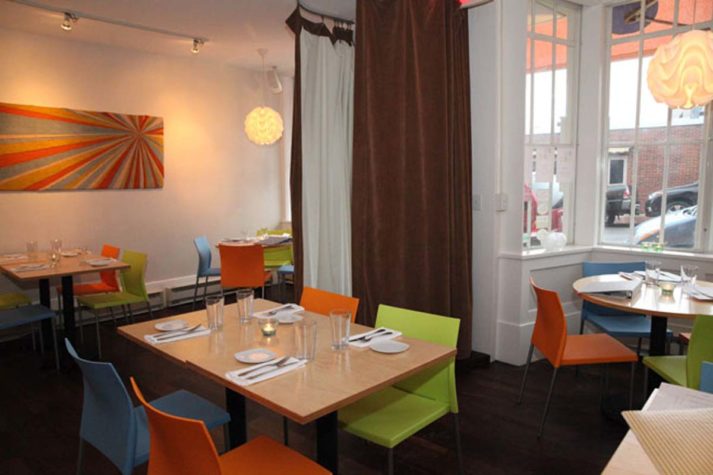 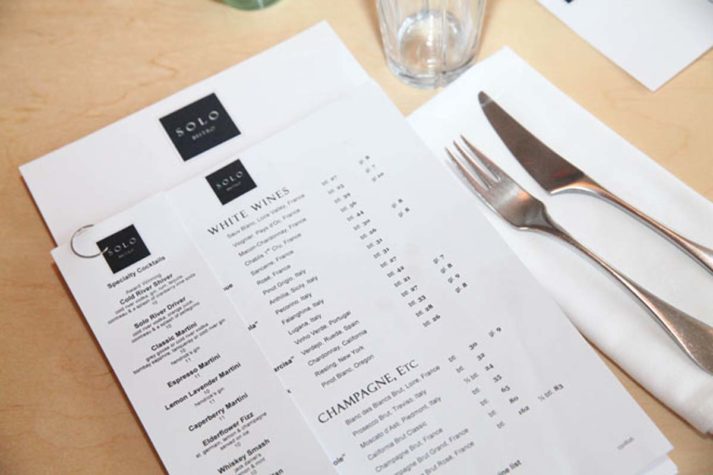 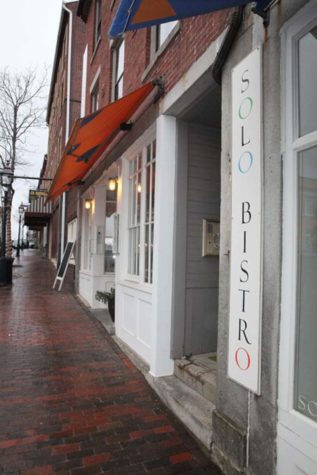 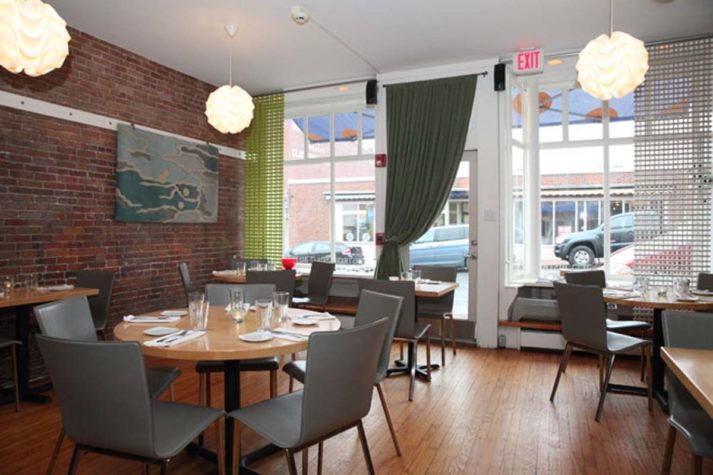 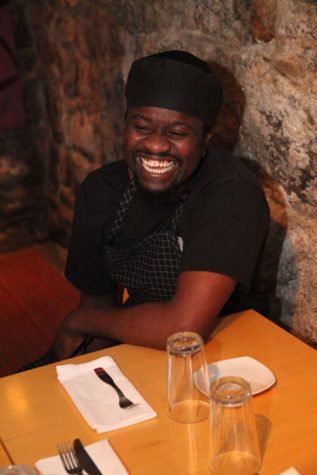 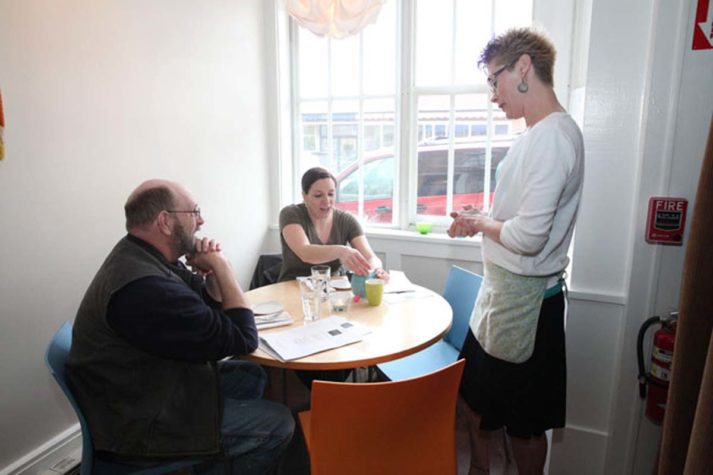 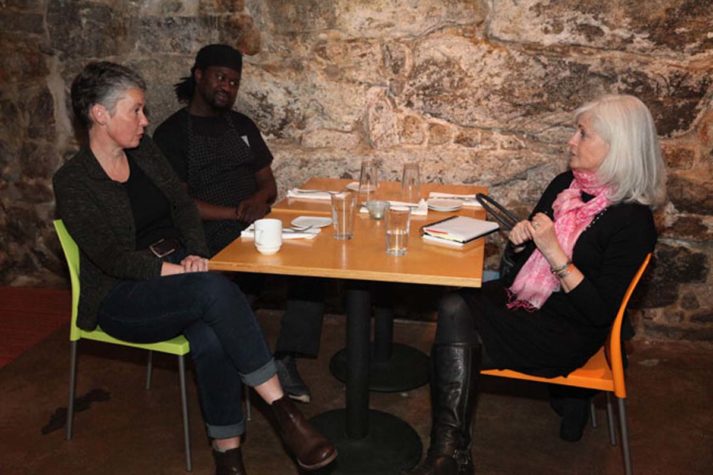 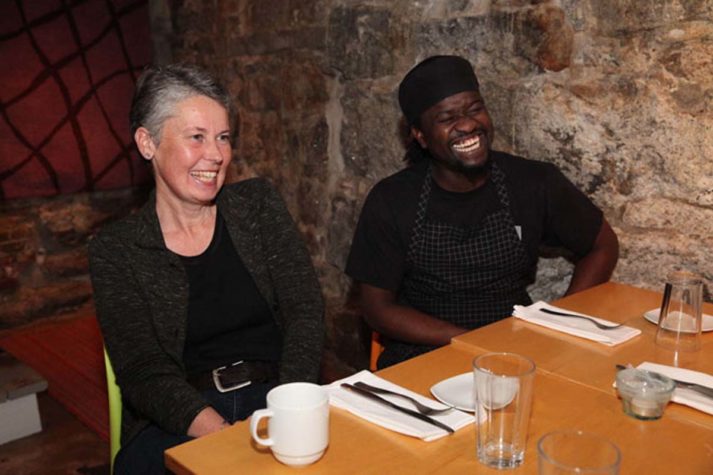 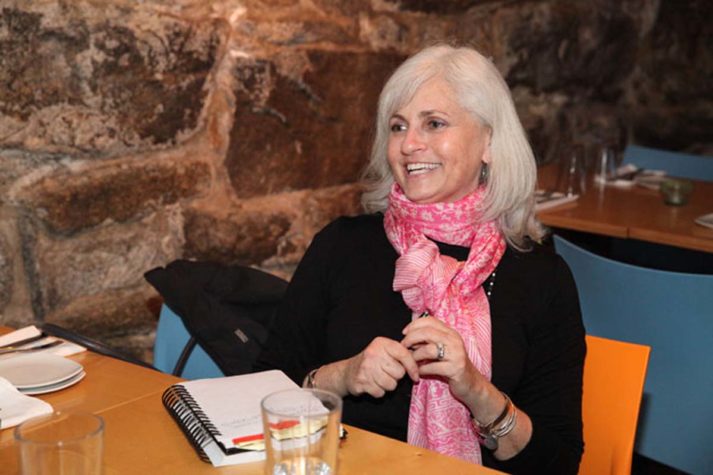 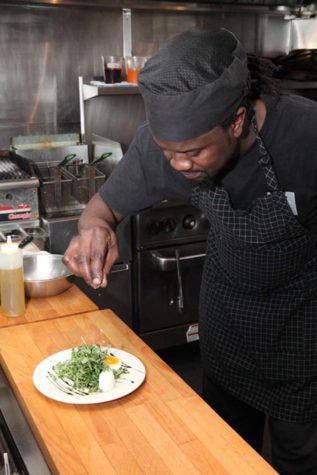 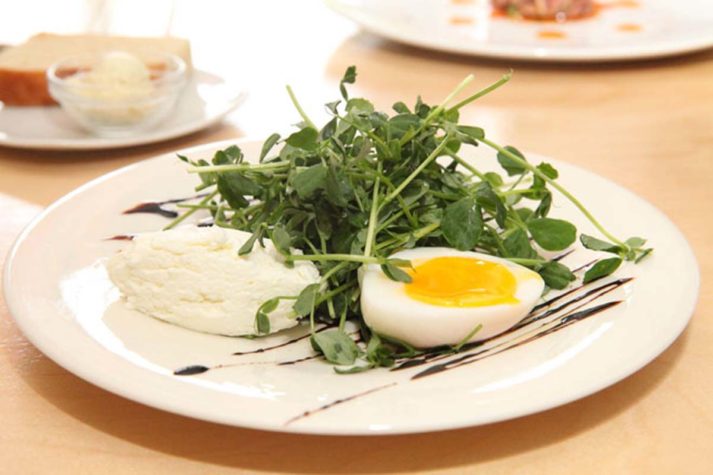 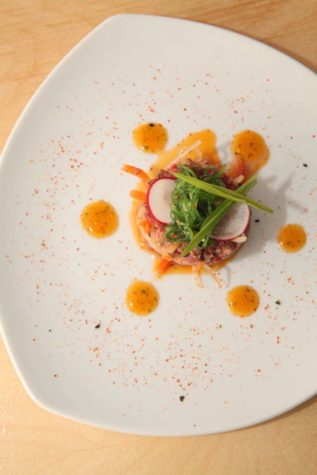 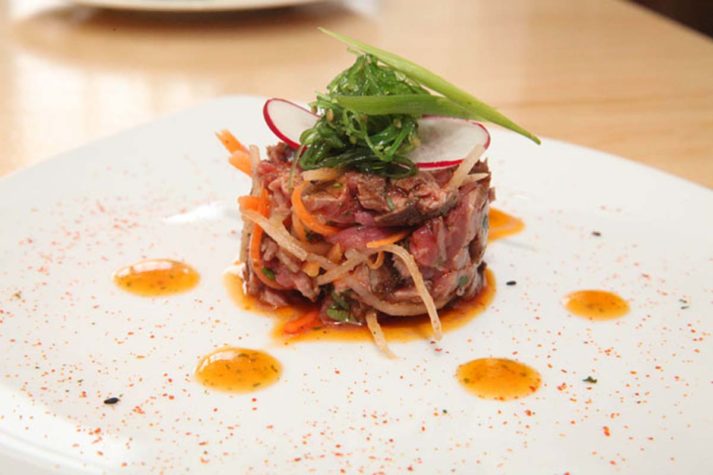 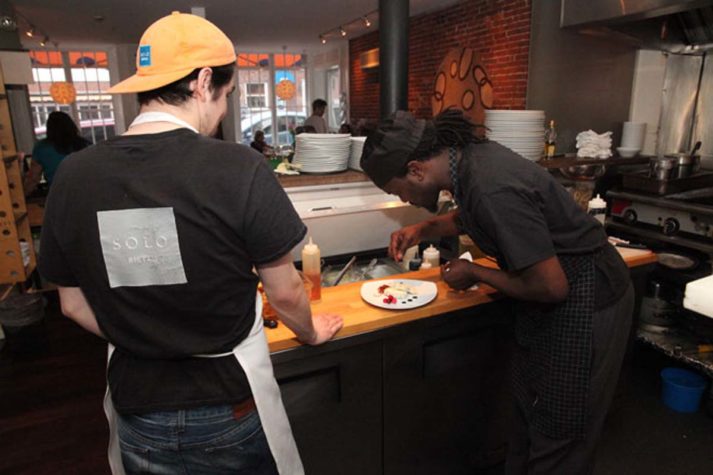 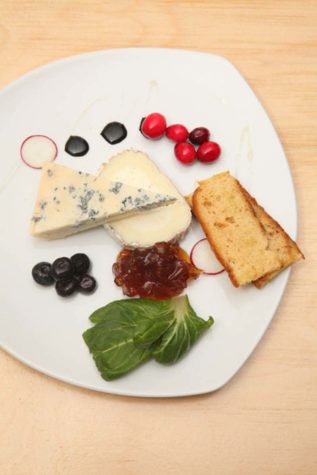 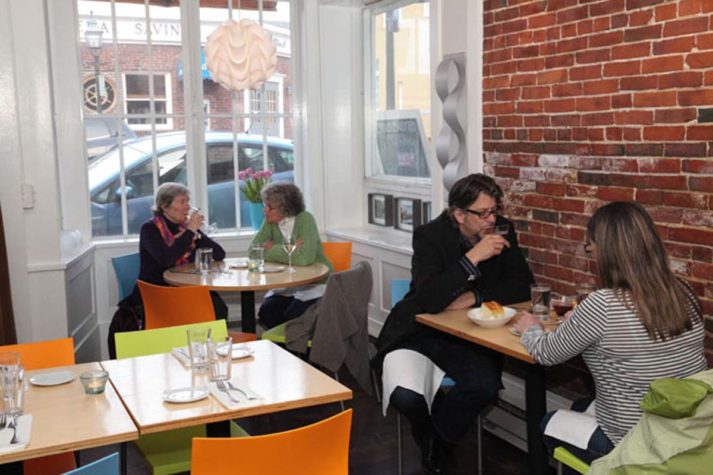 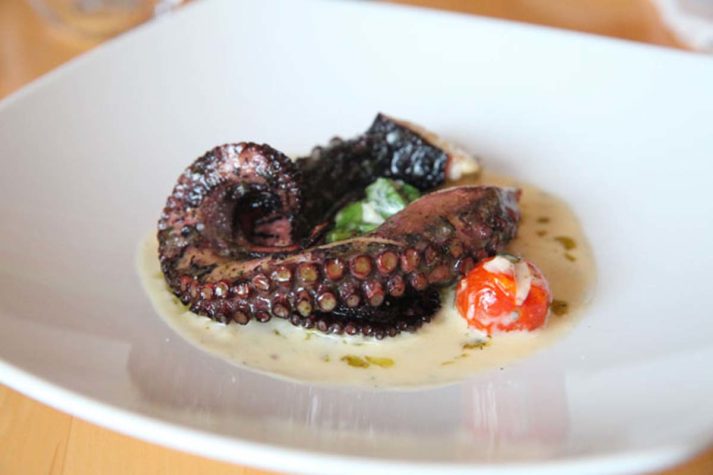 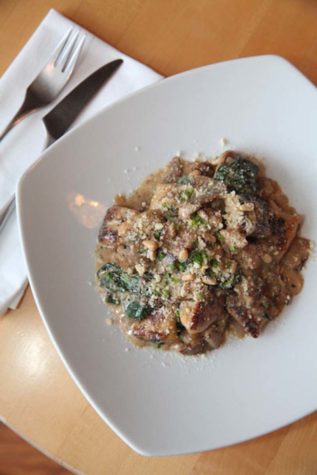 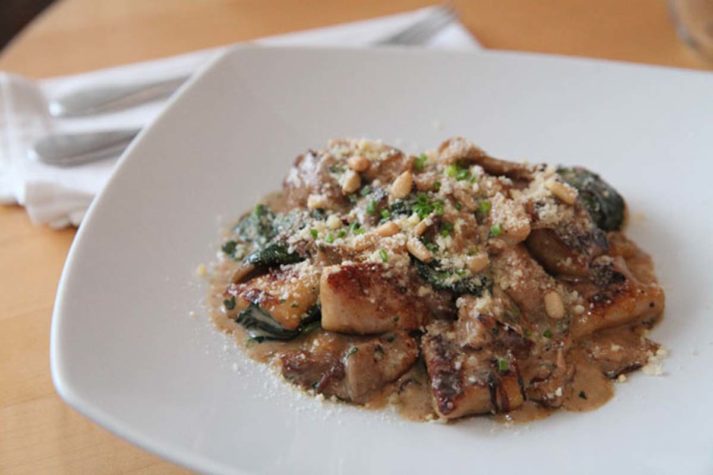 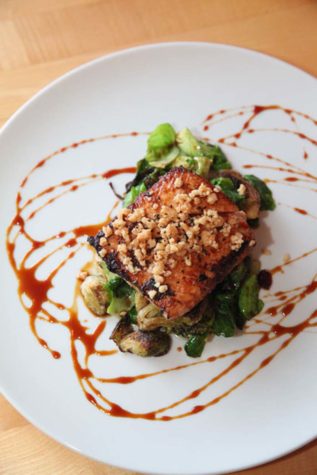 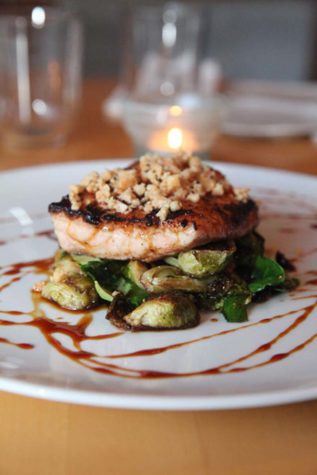 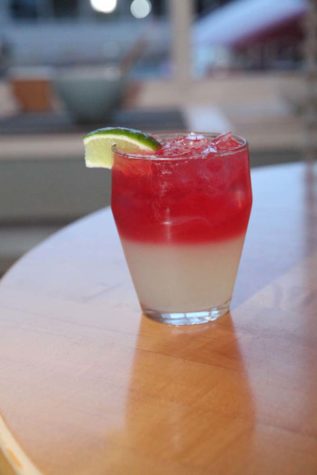 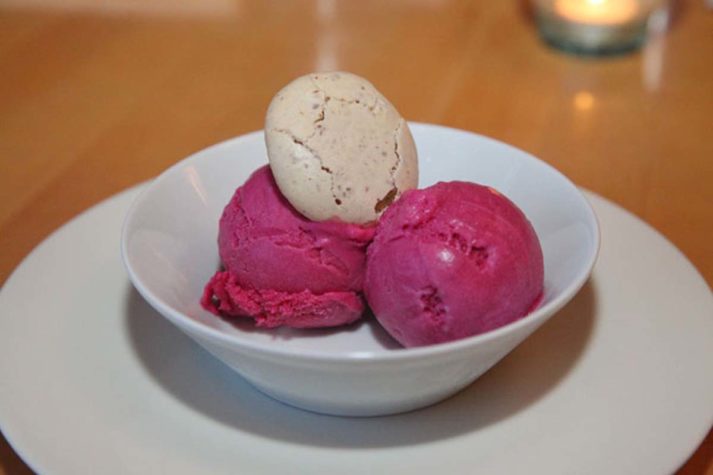 Will and Pia Neilson have owned Solo Bistro for 11 years. Pia’s previous design experience is evident in the restaurant decor from the colorful seating and blond wood tables set with geometric white plates to the graphic rugs and art hanging on the exposed brick walls. Hints of the antique building remain, such as rustic granite block walls in the downstairs bar, but the simple decor is a striking, pleasant contrast. It’s unpretentious and serene and, according to Pia, a good match for Ray’s food.

Ray Franklyn, the affable chef at Solo, is a native of Jamaica. His parents own a restaurant there and he learned to cook traditional island food when he was a child. Fresh seafood plays a big part in the culinary landscape of Jamaica, so Ray found it easy to adapt to his skills to cooking in Maine. His signature dish of grilled octopus in ouzo cream sauce is a version of a recipe he brought from home. Ray has been in Maine for 12 years and cooking at Solo for the past four. He’s a big fan of local ingredients. “I’m on a first name basis with all the farmers at the Bath farmer’s market,” he says. “I’ve built relationships with all of them.” His visits to the market every Saturday inspire the menu at Solo Bistro, bringing the best each season has to offer. Of course, there are favorites that have a permanent home on the menu such as pan-crisped gnocchi—a light and delicate dish in rich porcini cream sauce with mushrooms and sautéed greens.

Other menu items at Solo Bistro span the globe. A spicy beef salad is accented with wasabi and ginger. Pan-seared scallops over blue cheese grits is spiked with piri piri, an African chile sauce. And the perfectly cooked miso roasted salmon has a tamari glaze and is topped with macadamia nuts, which creates a delicious sweet and salty combination. But Maine ingredients play a starring role as well. You can start dinner with cheeses from Hahn’s End in nearby Phippsburg and York Hill Farm in New Sharon. A light salad features a tangle of pea shoots from Goranson Farm in Dresden, along with a soft egg and fresh chevre. And there’s always an out-of-shell lobster dish on the menu.

When I ask Pia what keeps Solo Bistro going over the winter, she and Ray agree that along with some dedicated locals, it comes down to skillful planning of the menu. Every evening a three-course prix fixe is offered for $24.99. On Wednesdays, those three courses are just $17.99. Fridays feature an ever-changing roster of live jazz musicians, who perform in the dining room.

Summer is busy and the restaurant fills up with many guests who own second homes in the area. They return year after year to dine at Solo. “I’ve been so touched by notes I’ve received from people, who tell me that Solo plays a part in their vacation memories,” says Pia. “I had never thought of that before we opened, but now it’s what makes all the work worthwhile.”