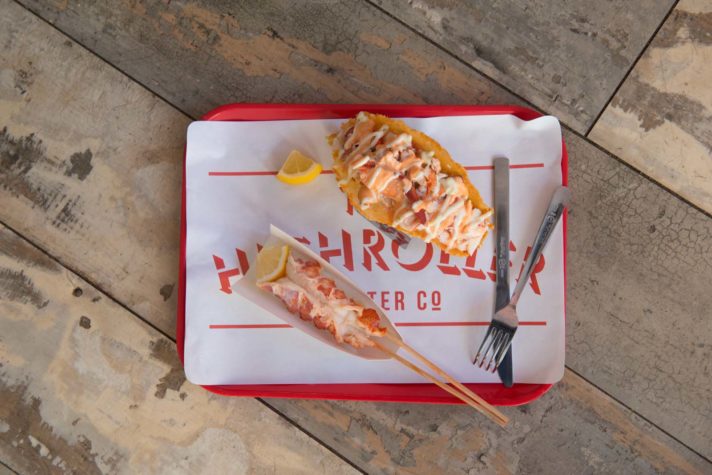 The Highroller Lobster Company’s offerings go beyond rolls: the cheese crisp lobster taco and the Lobby Pop are both excellent choices.

The Best Lobster Rolls in Portland

The best way to prepare a lobster roll is wholly subjective and highly disputed. (Only mayo? A touch of butter? Steamed or grilled buns?) But no matter how you prefer it, Portland has the perfect lobster roll for you.

This food cart-turned-restaurant has elevated Portland’s lobster roll scene to another level. The Highroller Lobster Company serves them on brioche rolls baked daily from Southside Bakery with a choice of sauce–from the traditional butter to lime or jalapeño mayo to lobster ghee. You can even stray further from tradition with Highroller’s lobster grilled cheese, the cheese crisp lobster taco featured on Thrillist, or a Lobby Pop—a lobster tail on a stick.

Located on Chandlers Wharf, Portland Lobster Company (PLC) is an idyllic location for enjoying a lobster roll. PLC’s roll is robust, sweet, and buttery. It is refreshingly simple with tail and claw meat sourced locally and complemented by just a touch of butter, a bed of romaine lettuce, and mayonnaise and lemon on the side. Enjoying this lobster roll right on the pier satisfies the dream of summer in Portland.

Along with its seasonal truck in Fort Williams Park and year-round location  in Scarborough, Bite into Maine takes its lobster rolls to Portland every spring with a food truck at the Allagash Brewing Company tasting room from May to October. Pair your Allagash White with one of three rolls: the Maine, a classic roll with mayo and chives, the Connecticut, with just melted butter, or the Picnic, a cookout spin on a lobster roll featuring coleslaw, butter, and celery salt. If a roll isn’t to your liking, try the lobster grilled cheese or the lobster BLT to get your share of vitamin L.

Do not be misled by the lack of a seaside location—Susan’s Fish-n-Chips is a local seafood treasure., Listed on the menu as a “lobstah roll,”  Susan’s classic and infinitely satisfying lobster roll is served on a grilled hot dog bun and heaped with an assortment of lobster meat, a thin layer of mayo, and iceberg lettuce. If the standard roll doesn’t satisfy your crustacean cravings, you may want to try the deep-fried lobster tail on a stick (if you’re lucky enough to show up when they’re available).

Although the company has shacks in ten states, Japan, and Singapore, Luke’s Lobster’s flagship restaurant in Portland will give you the quintessential Maine lobster experience. From your seat in the restaurant, watch the lobstermen bring in the daily catch to the lobster selling station while you enjoy a roll with a quarter-pound of fresh claw and tail meat tossed with mayo and lemon butter. Or, tuck in to a lobster BLT served on a toasted sesame bun with applewood bacon, lettuce, and tomatoes. Plus, if your child is an adventurous eater, Luke’s offers a kid’s lobster roll for $15.

Eventide’s brown butter lobster roll has become synonymous with a trip to Portland for the culinary crown. With national recognition for James Beard Award–winning chefs Mike Wiley and Andrew Taylor, Eventide usually has a crowd camped out on Middle Street waiting to savor this now-classic sandwich. The mouthwatering little lobster roll is served on a homemade split-top steamed bun, loaded with freshly picked lobster, and topped with nutty brown butter.

In the middle of Portland’s working waterfront, Becky’s Diner is a local institution. Here you can trust that when you order a lobster roll, you’re getting a genuine Maine lobster roll. A quarter-pound of fresh-shucked lobster meat lightly dressed in mayo sits atop lettuce and comes with a side of crispy, salty fries. If you’re not a mayo lover, you can get a side of melted butter instead.

This post was originally published in May 2019 and has been updated.