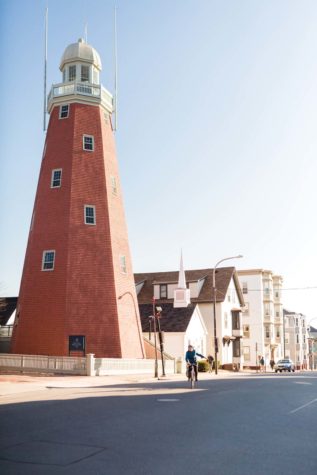 The Portland Observatory is located at the top of Munjoy Hill. Photo by Jeff Roberts.

There’s always something new and exciting happening in Maine’s largest city, but some of Portland’s most intriguing attractions are the ones hiding in plain sight.

The Portland Observatory | East End
Standing tall in Portland’s Munjoy Hill neighborhood is the Portland Observatory, the only surviving maritime tower of its kind in the United States. The tower, which was built in 1807, was used for communication with ships coming into Portland’s harbor until 1923. At 86 feet tall, the octagonal structure offers visitors sweeping views of Casco Bay for a small fee.

Portland Brick | India Street Neighborhood
In the India Street neighborhood, situated between the Old Port and the East End, the sidewalks tell a story. Embedded throughout are 30 handmade bricks commemorating and celebrating neighborhood events in the places they happened. Portland Brick, which was created by artists Ayumi Horie and Elise Pepple, is a creative way to learn about the history of the area, whether it happened recently or as far back as 1632.

First Parish Church | Downtown
As the oldest church in Portland, the First Parish Church, built in 1825, has survived a great deal, including the Great Fire of 1866. The church’s congregation was established in 1674, and when the British shot a cannonball into the church’s former building, the parishioners decided to keep it. The 12-pound ball is now embedded in the chande- lier hanging over the middle of the worship space.

The Maine Lobsterman Statue | Old Port
Kneeling outside of the Nickelodeon Cinema at the corner of Middle and Temple streets, a bronze lobsterman is banding a lobster claw. The statue, which was built in 1939 by sculptor Victor Kahill of Portland, was modeled after Bailey Island fisherman H. Elroy “Snoody” Johnson. At the sculpture’s unveiling, onlookers were disappointed that Johnson’s dog, Bruin, wasn’t incorporated. To compensate for the oversight, Bruin was given an honorary lobster license by the state commissioner of sea and shore fisheries.

Boothby Square Watering Trough | Old Port
Between Pearl and Silver Streets where Fore Street turns to cobblestone, traffic is divided by a stretch of greenery and stonework. Among that stonework is the Boothby Square Watering Trough, which was installed in 1902 to provide drinking water for horses, dogs, and goats. It was removed in 1946 after being struck by a car but was reinstalled in 2004 and is surrounded by protective granite posts.

The Longfellow Garden | Arts District
The secluded Longfellow Garden, which is hidden behind the Wadsworth-Longfellow House and the Maine Historical Society’s museum and research library, offers visitors respite from the bustle of Congress Street. The Colonial Revival–style garden is a great place to go for a quiet walk or to enjoy a peaceful outdoor lunch surrounded by lush greenery. The quaint space is free and open to the public May through October.

The Gothic House | West End
Nestled in Portland’s West End is the Gothic House, a two-story home with a large arched window and vine-like carvings bordering its steeply pitched roof. The home, which is listed on the National Register of Historic Places, is considered one of the earliest and best examples of Gothic Revival architecture. Built in 1845 where the Holiday Inn by the Bay is now, the home was moved to 387 Spring Street after demolition threatened it in 1971.