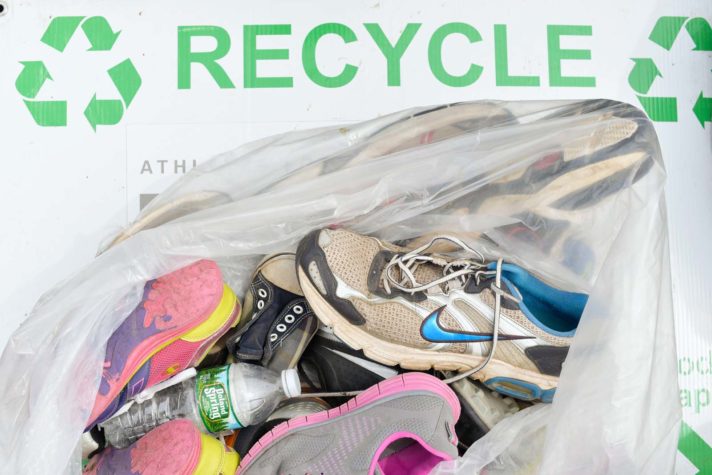 Nike collects unwanted running shoes on race day and recycles them into a variety of products through its Reuse-A-Shoe program. 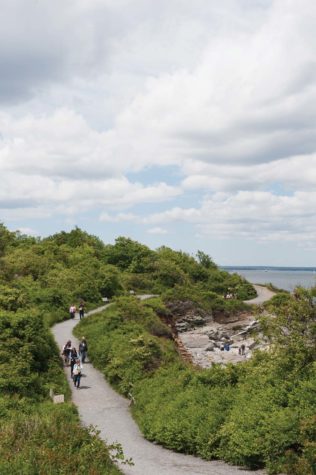 The Cliff Walk at Fort Williams Park in Cape Elizabeth, near the finish line for the TD Beach to Beacon. Achieving Evergreen Certification from the Council for Responsible Sport recognizes significant efforts by race organizers to preserve the natural beauty of the landscape surrounding the course. 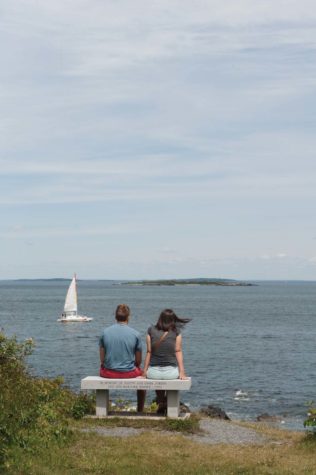 Looking out to Casco Bay from Fort Williams Park. 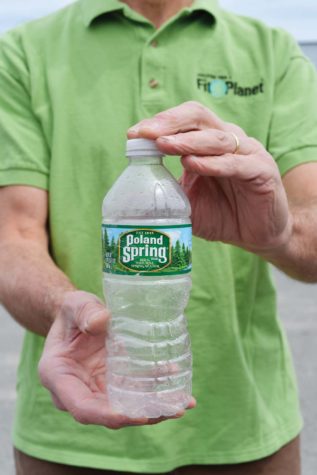 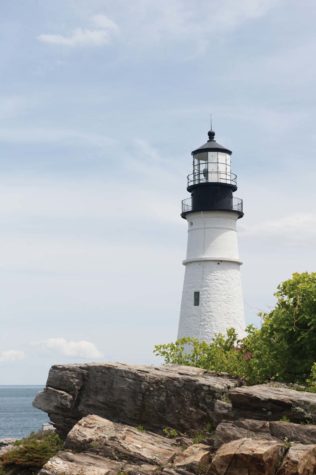 Portland Head Light, the “beacon” of the TD Beach to Beacon, is the oldest lighthouse in Maine.

The TD Beach to Beacon 10K achieves an elite designation for sustainable practices on and off the course.

By the late afternoon of August 5, visitors to Fort Williams and The Portland Head Light in Cape Elizabeth will find no trace of the 10,000 or so runners, volunteers, and spectators who were there a few hours earlier to celebrate the finish of the TD Beach to Beacon 10K.

Along the 6.2-mile course, every single one of the thousands of paper cups handed to runners as they passed by will have been collected and recycled. Not only is the race marking its 20th anniversary this year, it is celebrating another major milestone: Evergreen Certification from the Council for Responsible Sport, a prestigious designation that denotes an exceptionally high level of commitment to sustainability, the environment, and the community. It’s the “leave no trace” ethic on a grand scale.

The TD Beach to Beacon is one of only nine out of 140 certified athletic events to achieve Evergreen status since the council was founded in 2008, and it was the first major road race in North America to be awarded the designation under its current standards.

To coordinate the effort, race organizers partnered with Bruce Rayner, chief green officer of the Massachusetts-based Athletes for a Fit Planet, who became involved as a consultant in 2010. A runner and triathlete, Rayner was inspired to launch the company after seeing too many races where everything was thrown in a dumpster destined for the landfill. “I’ve been a committed environmentalist for a long time, and it dawned on me that this is not the way for a race to serve the community,” Rayner says. He launched Athletes for a Fit Planet in 2008 and has worked closely with the Council for Responsible Sport from the beginning. “We help with planning up front to introduce programs, polices, and practices that will help races reduce and measure their environmental footprints, so they can make improvements every year.”

The council developed its standards in partnership with event-industry professionals and sustainability experts. They go well beyond the expected environmental considerations and encompass every element of a sporting event. The council identifies a list of best practices under its “five pillars of responsible sport”: planning and communications, procurement, resource management, access and equity, and community legacy. Under procurement, for example, race organizers need to enact a policy about what can and can’t be brought on site to eliminate items that end up in a landfill. Resource management involves a written waste diversion plan that not only specifies composting, but also establishes whether or not leftover food can be donated to local organizations that feed the hungry. Under planning and communications, leaving the dates off signage means materials can be used again the following year.

Each item on the list is assigned a credit value, and all must be documented as part of the organization’s certification process. “It’s a total of 61 best practices, so it works like a menu that race organizers can choose from,” says Shelley Villalobos, managing director of the Oregon-based council. “The 2016 TD Beach to Beacon hit 57 of them, which is the 90 percent threshold needed to earn Evergreen Certification—the highest level possible in our program structure. It’s an elite designation.”

Evergreen certification was the ultimate goal of an effort initiated in 2012, when the TD Beach to Beacon achieved Silver status (the 60 percent threshold) from the council, followed by Gold status (the 75 percent threshold) two years later. Every component of the TD Beach to Beacon contributes to reducing the event’s waste footprint, including the race Expo. Styrofoam is banned, and exhibitors are discouraged from offering giveaways that have little value. “When the runners go to pick up their registration and their bibs, they don’t get a big bag of stuff they’ll probably throw away when they get home,” Rayner says. Suppliers are urged to source items locally, minimize packaging, and use recycled paper and environmentally safe inks for any printed materials. Nike, a TD Beach to Beacon corporate partner, provides T-shirts made from 100 percent recycled material; approximately ten plastic water bottles are needed to make one shirt, says Rayner. In addition, Nike collects unwanted running shoes on race day and recycles them into products like synthetic turf and playground surfaces through its Reuse-A-Shoe program.

Composting is another important element in the race having achieved Evergreen status. The total amount of composted waste jumped from 2,280 pounds in 2014 to 6,626 pounds in 2016. Most of what can’t be composted is recycled, including the paper cups handed to runners at water stations along the course. “That’s 6,000 people times five cups, so 30,000 cups,” Rayner says. Water station volunteers are instructed to fill the cups halfway to conserve the natural resource; corporate partner Poland Spring provides both the water and the cups. Empty water bottles— also from Poland Spring—and other eligible containers are recycled separately with Clynk, and the deposit money is donated to the race beneficiary, which for this year will be Let’s Go!, a program of the Barbara Bush Children’s Hospital at Maine Medical Center. In 2016, Clynk processed a total of 5,088 containers, resulting in a $245 donation to My Place Teen Center.

The carbon footprint of a race the size of the TD Beach to Beacon is impacted significantly by transportation, especially travel to and from the race. Efforts to reduce the footprint include encouraging everyone involved to carpool and a free bike valet service offered by the Bicycle Coalition of Maine. Nearly 250 people took advantage of the bike valet service in 2016, and there is a push to significantly increase that number this year. For $3, race participants can buy a Green Tag that offsets 300 pounds of CO2 (equivalent to driving a car about 300 miles) through a partnership with NativeEnergy of Burlington, Vermont. Green Tag purchases help fund new, greenhouse gas–reducing projects (such as wind farms).

The 800 volunteers who play a large role in the TD Beach to Beacon’s success also contribute greatly to its Evergreen status. Those on the “Green Team” supervise the collection of everything that gets tossed out at stations set up with separate bins for trash, recyclables, compost, and redeemable bottles and cans. “We owe a lot to Bruce and his team for helping to monitor all of this for us, but we also owe a lot to our volunteers,” says race president Mike Stone. “They have many different functions and jobs. But no matter what they do, everyone is very conscientious about recycling and sustainability.”

Villalobos points to the volunteers as an example of community legacy—one of the pillars of responsible sport needed for Evergreen Certification. “The race committee is all-in in terms of their commitment to be responsible,” she says. “The TD Beach to Beacon has created a platform where local partners from all walks can join in, and a community can get together in a celebratory fashion. Yes, it’s about fitness and excitement and goal setting and achievement, but it’s also social togetherness and cohesion that make a place feel like home.” The race also makes a difference in terms of the local economy. In the 2016 Sustainability Report prepared by Athletes for a Fit Planet, the total amount for “lodging, food, entertainment, and car rentals,” related to the race was estimated at $977,500. “Cape Elizabeth as our host town has graciously opened their doors, and we want to be respectful to them,” says Stone. “To take it one step further, it’s important to the state of Maine.”

While all involved acknowledge that achieving Evergreen status was a team effort, a single individual has quietly led the pack— TD Beach to Beacon founder Joan Benoit Samuelson. “Joanie is really the inspiration for the race’s commitment to environmental sustainability and for us earning Evergreen,” says Rayner.

“I think we need to serve as stewards of the beautiful place we call home,” says Benoit Samuelson, who grew up in Cape Elizabeth and now lives in Freeport. “The main mission for my running in the last several years, as I’ve left the competitive ranks, is to build awareness that what prevention is to health, conservation is to the environment.” When she founded the TD Beach to Beacon as a way to give back, its original motto was “Shine the Light on Kids,” which is still reflected in the fact that a different children’s charity is the beneficiary of the race every year. The Evergreen Certification is a natural extension of Samuelson’s vision, because what better way to benefit kids than to protect the environment—now and for their future? 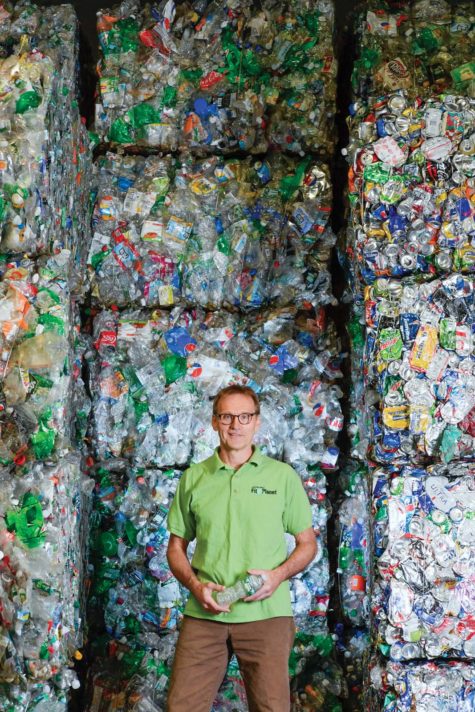 Bruce Rayner, chief green officer of Athletes for a Fit Planet, at the Clynk recycling facility in South Portland. Rayner’s organization worked with the TD Beach to Beacon to plan, institute, and document its environmental policies, with the goal of achieving Evergreen Certification. 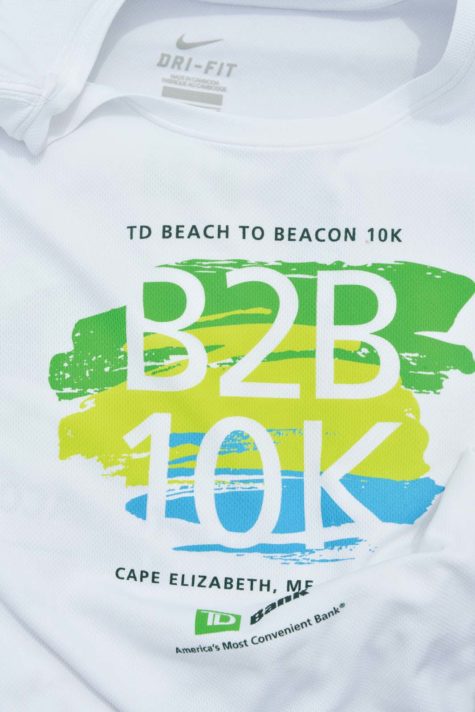 The T-shirts Nike provides for runners are made from recycled plastic water bottles; it takes about ten bottles to make one shirt. 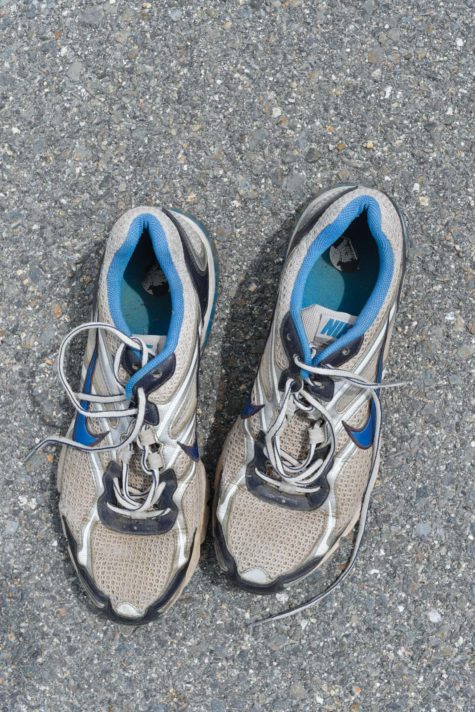 Instead of ending up in a landfill, this old pair of running shoes will be recycled by Nike into synthetic turf, playground surfaces, or other products.