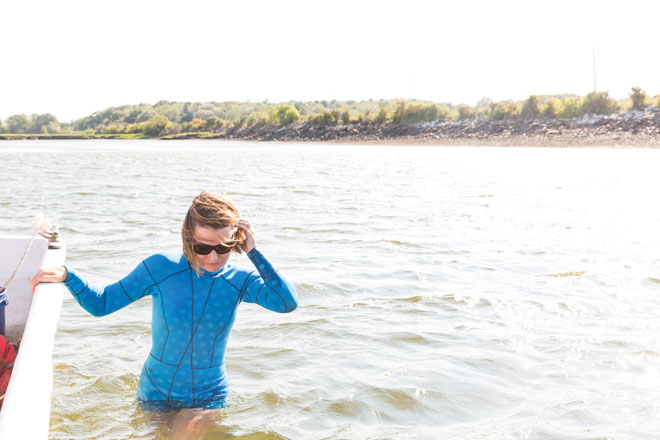 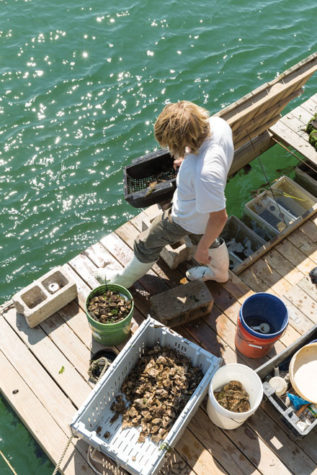 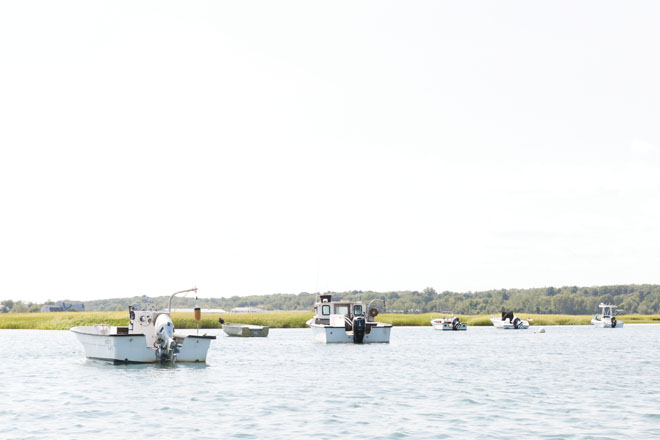 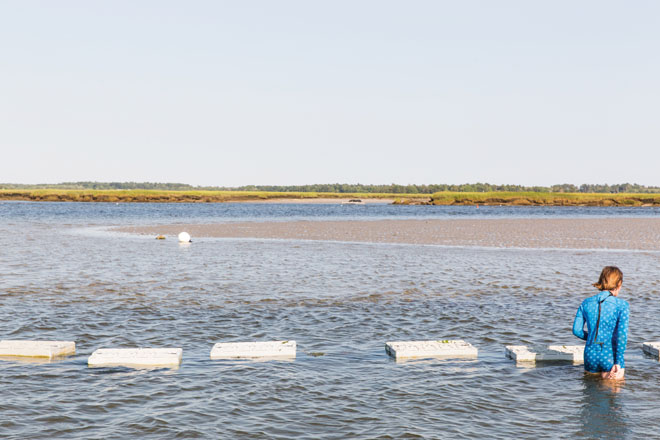 Abigail Carroll grows Nonesuch Oysters and a new life for herself in Maine.

Rivers and ocean collide at Pine Point in Scarborough, forming jigsaw-puzzle pieces of land that change shape with the tide. Seafood restaurants and houses rise up from the grassy banks. Gulls swoop and caw. I park near the town landing in a lot filled with muck-crusted trucks and cars with out-of- town plates belonging to people who have traveled far to find the lobster advertised in big white letters across the roof of the Pine Point Fisherman’s Co-op. That’s where I find the fisherwoman I’ve come to meet—Abigail Carroll. It’s a sunny, windy day. Her sand-colored hair blows sideways across her face while she chats with two others who will join us on a tour of the Scarborough estuary, to learn about—and eat—the Nonesuch Oysters she grows here.

“If you hook a right there you’re in Saco Bay,” she says as we make our way out onto the dock. “But if you look this way you’ll see all these rivers and tributaries—the Libby River, the Nonesuch, and the Scarborough.” I appreciate the geography lesson, but Carroll is describing much more than that: she is introducing us to the varied bodies of water that combine in the Scarborough estuary, giving Nonesuch oysters their distinct taste. The fresh waters imbue the oysters with sweetness, the ocean adds brine, even the seagrasses spearing the surface of the water lend their grassy flavor.

“Oysters are a pure reflection of their environment,” says Carroll as she scoops a handful of fingernail-sized oysters from the nursery, a collection of bins attached to a nearby floating dock. A short boat ride away are hundreds of larger floating containers. She explains that most oysters on the East Coast are the Crassostrea virginica variety, and yet anyone who has been to an oyster bar knows of the differences in taste, size, and texture generated by the environment in which an individual bivalve is grown and the kinds of water and organic materials it processes over its lifetime. Nonesuch oysters have a brightness to them, rather than the earthiness that characterizes oysters pulled from beds farther inland. “An adult oyster filters up to 60 gallons of water per day, but right now the tide is high, so they’ll probably be pretty briny,” says Carroll, scanning the water. “The juice in them will consist of the last sip they took.” On the dock, whipped by wind and squinting in the sunlight, I marvel at the poetic quality of these protein-and mineral-packed animals, especially considering the fact that oysters might help us save the planet. They’re cleaning polluted water, helping with storm surge and coastal erosion, and reminding us— through their infinite variance—of just how sensitive marine life is to even the smallest environmental shifts.

Despite any inherent romance, the day-to- day work of running an oyster farm is down and dirty. While cupping those baby oysters in her hands, Carroll is candid about all the successes and setbacks she’s faced over the past six years in business—the endless trial and error, the mussel infestations, the thousands of oysters lost without explanation. In addition to honest, Carroll is smart, funny, urbane, and glamorous— even in crocs—and I eagerly board the Carolina skiff to learn more about not just oysters but also her, about how this self-professed “accidental oyster farmer” found herself here.

The daughter of a French philosophy professor, Carroll grew up in Orono and Portland in a foodie family of Francophiles. “We would have oysters at home all the time, but I always thought they were kind of creepy and stayed clear,” she admits. Oysters aside, Carroll understood learning French and other languages would unlock doors to places and cultures she wished to escape to. She studied abroad in France while a high school student at Waynflete School before going on to obtain a degree in French and Spanish literature at Barnard College and a master’s in international affairs from Columbia University. She spent most of her twenties and thirties in New York City and Paris, where she was living when, in 2009, her life took a dramatic turn.

In a TEDxYouth talk she gave at Biddeford High School in 2013, Carroll set the scene this way: “I was living in Paris, France. I was trading stocks and consulting on business plans—work I could do from home, in my pajamas if I wanted to—and I was dating a French count. I had a clean and easy life in Paris, but on the inside something was missing. I didn’t feel like I had a purpose. The truth is, I was in Paris living the most French experience of all: the existential crisis.” Her relationship ended, and Carroll returned to Maine for the summer. She took on a consulting project with an aspiring oyster farmer and, when he dropped out, unexpectedly found herself owning the farm. “Unlike some of my projects in the past where I may have had a more pertinent skillset but the demand was less clear, in 2008 there was a clear market opportunity for more Maine oysters,” says Carroll.

“If someone had told me I would end up back in Maine with an oyster farm, I would have thought they were joking,” she says. But this is no joke. We’re bobbing in the Scarborough marsh, checking on the rows of floating mesh bags filled with oysters, a couple dozen of which Carroll will brush clean and shuck and serve with just-chopped shallots in a homemade mignonette sauce. The oysters from the riverbed are a deep, rich green; those extracted from bags are lighter in color. All of the oysters I try are delicious, sweet, spiked with brine, their flavors more clear and distinct than they would be after chilling on a bed of ice at an oyster bar.

Carroll arranges another dozen oysters upon the tray and tells us that 1,000 will be delivered to Portland the next morning. They will likely end up at restaurants like Fore Street, Street and Co., Eventide Oyster Co., and Petite Jacqueline. Nonesuch oysters also appear at the famous Grand Central Oyster Bar, among other swanky New York City restaurants, but we’re all pleased to be tasting them here, on a work boat with a fussy outboard, taking in deep breaths of salty air between slurps of what some call nature’s perfect food.

I ask Carroll if she feels like she’s well suited to oyster farming and she laughs. “Sometimes I feel like Eva Gabor at Green Acres. I’m the urban rat in the family. I couldn’t even start my boat at first, but I guess I have grit.” Growing up with lots of entrepreneurs in the family and spending more than a decade helping others draft business plans made her want to create something of her own. Now she has. But she’s quick to praise the outstanding team helping her keep the bags of oysters afloat. Since the summer, Nonesuch has secured a ten-year lease on the 6.8 acres of water space they’ve been farming, which means the company can move forward with confidence. There was minimal attrition from the 2015 crop, and a foray into ground seeding is working, which means those deep, rich green (and extra-delicious) oysters have become the Nonesuch hallmark. “The farming has been really hard but it’s opened up all of these opportunities. Now we’re branching out, starting up a skincare project,” she says.

Out on the boat, before we return to the dock, she passes around a salve that’s good for “oyster lady hands,” a soothing, all-natural concoction of Maine seaweed, oils, and beeswax. At the Pine Point town landing, that’s what Abigail Carroll is called—the oyster lady—and it’s a title she’s proudly, however incredulously, adopted. “I like to think that I’m going to grow old with all of these fishermen,” she says. But she wasn’t always so sure. “In the past, I was part of projects that had everything to do with my ego,” she says. “Even when I started Nonesuch, the idea of failure was so awful, I could hardly get on the water. But then I decided to give myself the freedom to fail, the freedom to live out this story. As it turns out, I keep surprising myself.” 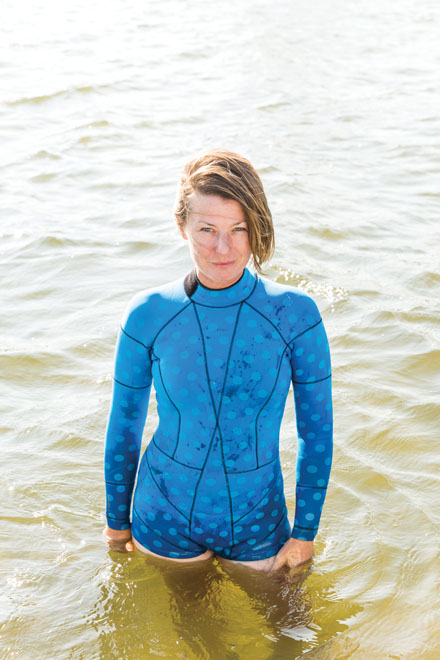  Abigail Carroll at home in the Scarborough estuary, where she grows Nonesuch Oysters in 6.8 acres of leased water space 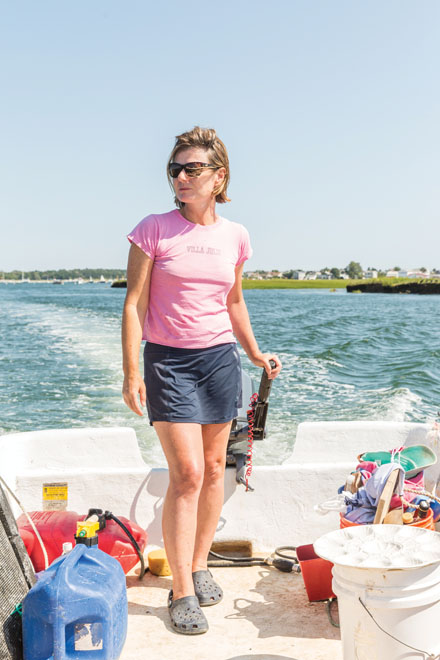 Even in the bitter cold, Carroll regularly checks on her crop, currently growing in the ground as well as in a collection of bins and mesh containers floating in the estuary. 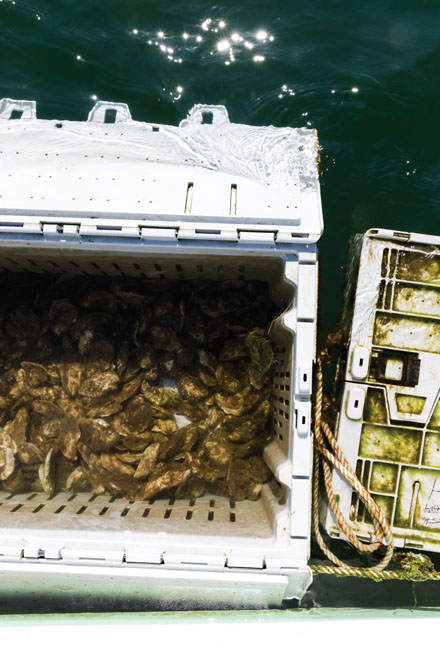 Growing oysters is both a science and an art, and the work is never done. 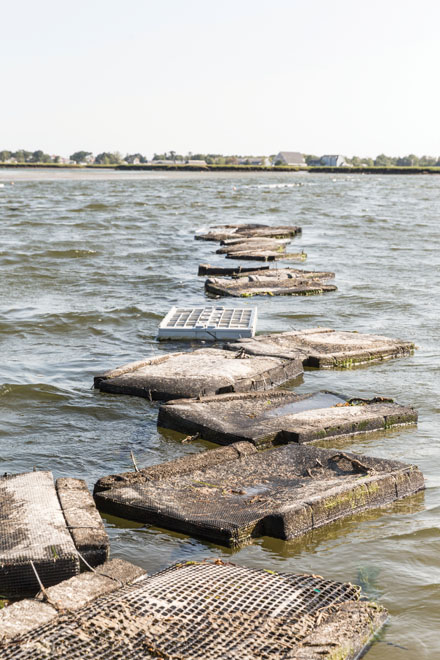