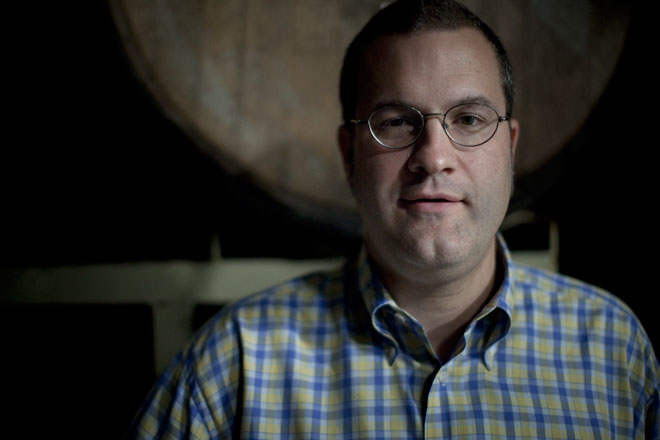 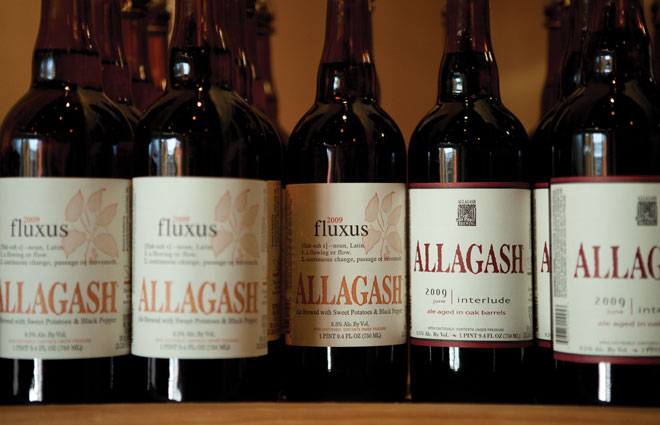 Allagash fosters a culture of experimentation. The companys employees constantly brew up test batches with new and unconventional flavors. Some, like the Fluxus and the Interlude, make it into commercial production and onto the shelves. 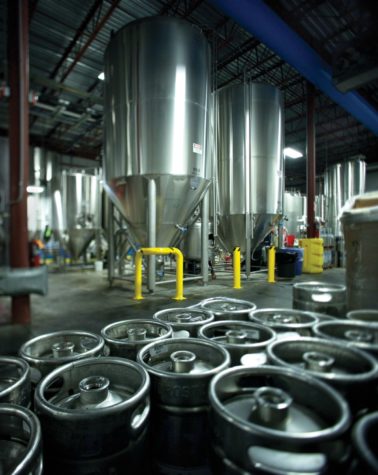 Allagash may have a reputation for funky beers, but their Portland brewery is pristine. 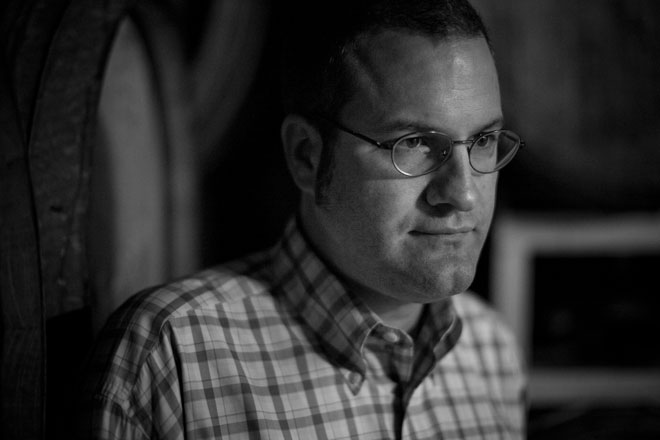 PROFILE-January + February 2010
By Peter A. Smith
Photographs by Trent Bell

Outside the Allagash Brewing Co., Rob Tod opens the wooden door to a shed and we step into his koelschip room. The room has a cement floor and a large tray designed for holding wort, the warm grain-infused tea that ferments into beer.

In the fall and spring, Tod and his brewmaster, Jason Perkins, have been bringing pilot batches into the shed. As cool, damp air seeps in through the open stained-glass windows, the air chills the wort. The fresh air also introduces microorganisms that colonize beer in much the same way that yeast spores in San Francisco’s foggy air activate the starter for the city’s traditional sourdough breads.

“So far, they seem to be making pretty good beer,” Tod says. “I don’t know whether we’ll sell it. This is just a big experiment.”

On a microbiological level, Allagash nurtures nature’s wild side. On an institutional level, the brewery fosters man’s wild side—a serious culture of innovation and experimentation. Outside of the Senne River valley in Belgium, Allagash is one of the few breweries experimenting with spontaneous, wild yeast fermentation.

“There are other craft breweries in the U.S. that are brewing Belgian-style beers, but what’s super unique about Rob is his commitment to putting a New World spin on a very authentic process,” says Sam Caglione, the owner of Dogfish Head Brewing in Delaware.  “He’s the only American craft brewer who’s invested in a koelschip room, which is just one example of his commitment to authenticity and creativity.”

Tod studied geology in college. After a stint in Colorado, he moved to Vermont for graduate school and worked in a pizza joint. Tod knew he liked science, but the extent of his knowledge about yeast went something like this: yeast is powdery stuff that makes pizza dough work. Then he started working at Otter Creek Brewing in Middlebury, Vermont, on July 1, 1993. On July 2, he had decided what he wanted to do for the rest of his life. A year later, he founded Allagash.

Tod did all the brewing, marketing, and tasting himself. On July 1, 1995, he sat down to drink a celebratory pint at the Great Lost Bear in Portland. He drank one beer and ordered a second. When he finished, he decided he had to go. “I had to go back and get the brewery going. I said, ‘Sorry, guys, I got to get back to work.’”

“I saw that Portland was really starting to undergo a cultural revolution with food and farming. I think people in Maine are not as interested in cookie-cutter commodities. They’re adventurous. They’re interested in handmade cheeses. People like something handcrafted, something made with passion. A community like that was a logical place to start doing something that was different.”

At the time, Tod’s beer had a reputation for tasting weird—beer drinkers were not accustomed to the taste in much the same way someone weaned on American cheese might find traditional European farmhouse cheeses weird. Tod’s yeast came from a Belgian brewer, and his cloudy, bottle-conditioned beers hadn’t really caught on. He developed a four-pack so that more people would try his beer and also to show that Allagash was the antithesis of 30-racks of filtered, mass-marketed, homogenized, slightly flavored Rocky Mountain stream water. He wasn’t driven by trends or
market reports.

“We just do what we want to do,” Tod says. “We’re driven in the exact opposite direction of where the wave is going. If we think of something, we do it.”

A sales sheet in the staff room shows a relatively flat line across most of the 1990s with a significant spike in the last four years. In 2009, they’ll be off the charts.

“Maine is becoming a huge destination for brewers and beer lovers,” says Chris Lively, who runs Ebenezer’s in Lovell and the Lion’s Pride in Brunswick. “It all started with the Great Lost Bear and Allagash. Rob took a chance.”

Allagash still brews funky beers. But the funkiness does not reflect on the condition of the facility. The brewery is pristine and clean. After a primary fermentation, a half-dozen employees bottle the beer by hand and label bottles on a WW II–era bottling machine. The beers are then sent for a secondary fermentation in the brewery’s cellar. On one side of the cellar, pallets of White sit in boxes, ready to hit shelves. On the other side is a pallet with kegs of experimental pilot batches.

“The pilot system allows us to experiment with things that are outside the box,” Perkins, the brewmaster, says. “Every beer that’s pitched to me gets brewed. It’s sort of like what a chef does. Someone will come up with a concept and say, ‘I really want to make a dish with figs and allspice.’ Then, it needs to become a recipe.”

Dee Dee Germain, who does much of the brewery’s mechanical work, brewed last year’s Fluxus, a beer made with sweet potato and black pepper. Jason Winchester, the head bottler, came up with the concept of smoked beer that became the Burnham Road.

Tod takes me into the oak room and Perkins comes in with a couple glasses of Mattina Rossa, a barrel-aged beer with raspberries, a concept brewer Greg Devito developed. After the beer has aged, the brewers hope to blend various barrels to incorporate different fruit flavors and tartness. Then, they’ll mix them in the lab and conduct a blind taste test. “It’s not just science,” Perkins says. “There’s a strong human element. The blend is all about taste.”

To me, it seems like most the staff had been at blind tastings all morning: everyone appeared so happily intoxicated. Tod assures me that they are just happily employed. “That’s the most important thing about Allagash. You take those people out of the mix and you don’t have the Interlude, you don’t have the culture of creativity, the culture of passion, and the culture of innovation. The brewery is sort of like all of our personalities tossed into a pot.”

Tod brings me back to the staff room. Long-stemmed glasses hang over a sink stacked with dirty dishes. There’s a line-up of chilled beers and there’s also compelling evidence that experimentation permeates the entire facility. On a folding chair, there’s a tray of brownies—a regular Friday thing, always a mystery flavor. Last week, the staff ate bourbon mint-julep brownies. Tod pops open an Interlude, a beer that is kind of like drinking liquid graham cracker in a rustic barnyard. We try a funky, tart Confluence.

Both beers use a wild yeast strain that the brewers found by accident in 2004. Allagash sent the strain to two labs, and now they introduce the yeast to their funkier beers.

We try some Gargamel and Vagabond. In addition to ale yeast and wild yeast, the beer has been transformed by Lactobacillus bacteria in the oak barrels, which introduce a clean, tart flavor—hints of marzipan or even coconut. These kinds of flavors take patience, microbes, and a leap of faith.

Except for the carbonation, which enhances the tart raspberry-ness, the Vagabond resembles a vintage port. It has aged in barrels. But unlike wine, which is bound to a specific time and place by soil conditions, or terroir, Allagash beer has taken on characteristics of the atmosphere—a sort of “air-oir”—imparted from the indigenous, airborne yeasts. In their beers, you can almost taste the wild air of Portland.

Once we’ve finished our staff-room tasting, Tod gives the remainder of a Gargamel bottle to a young couple on a tour. “Thank you, Rob,” they say. “We love you.”

The Gargamel has been in the works since 2007. It aged for 18 months in barrels with Maine-grown raspberries. When it went on sale last May, some diehards staked out the brewery overnight to ensure they received their two-bottle maximum. Once the Gargamel is gone, it’s gone.

“We probably won’t make it again,” Tod says. “It’s not that we don’t know what we did. We keep careful records. It’s just we have too many other ideas.”