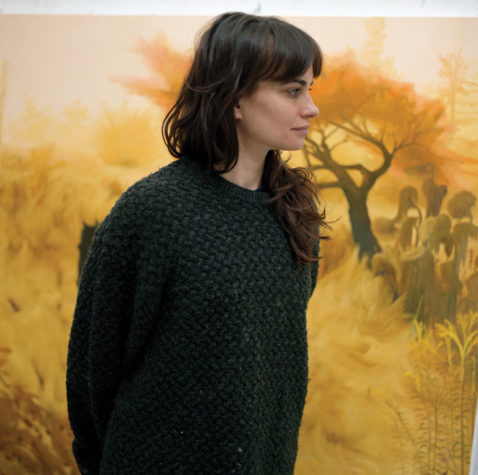 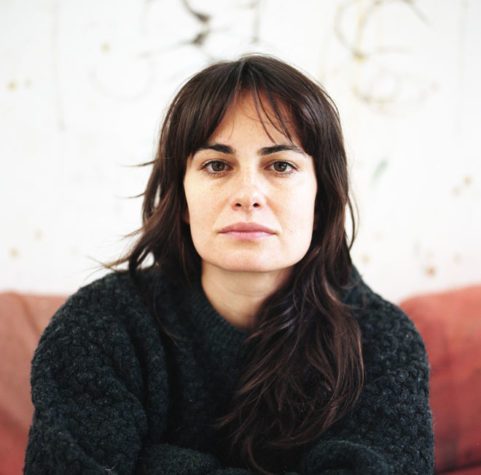 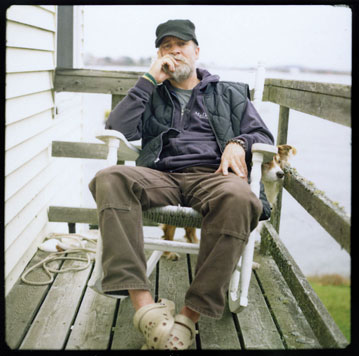 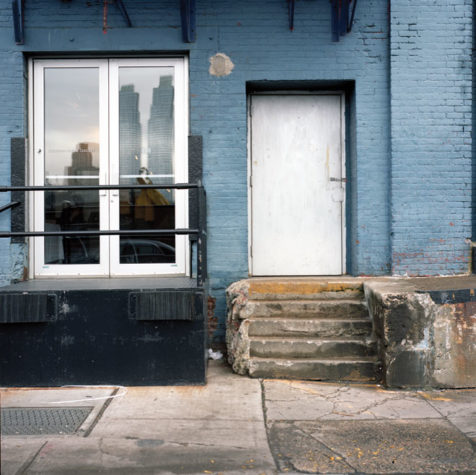 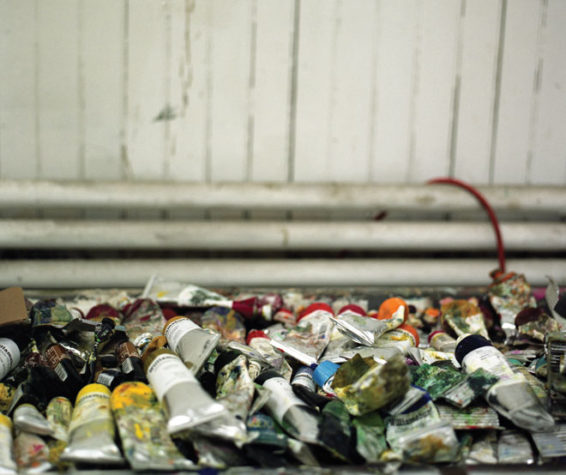 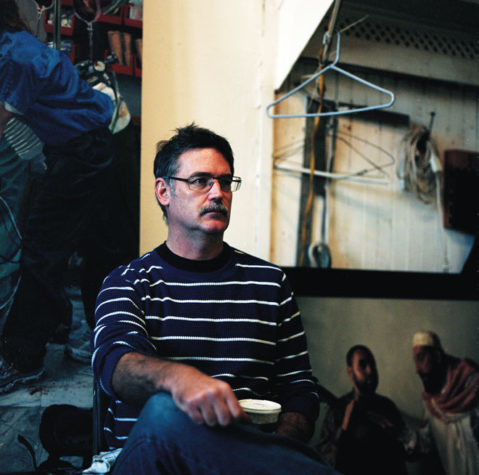 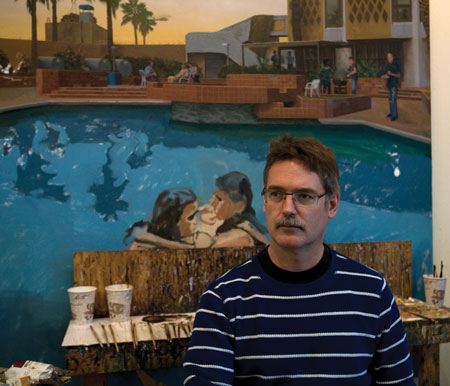 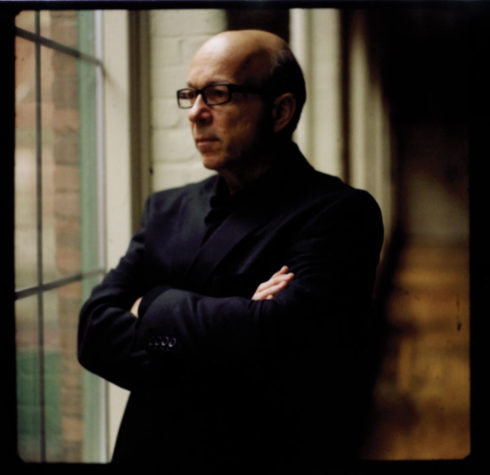 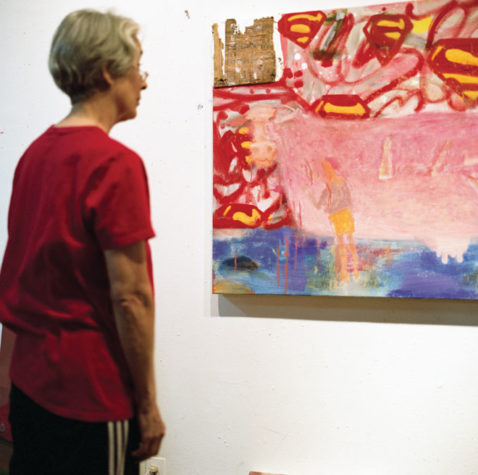 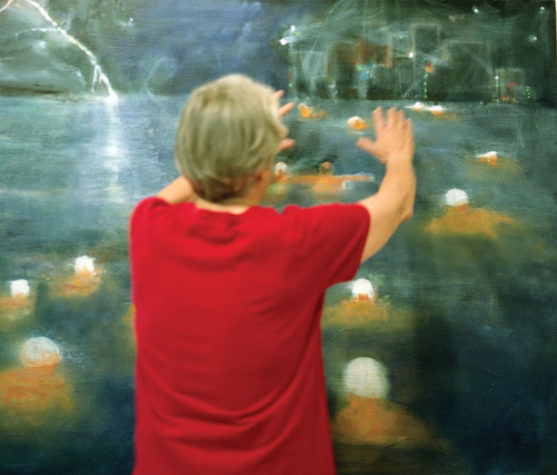 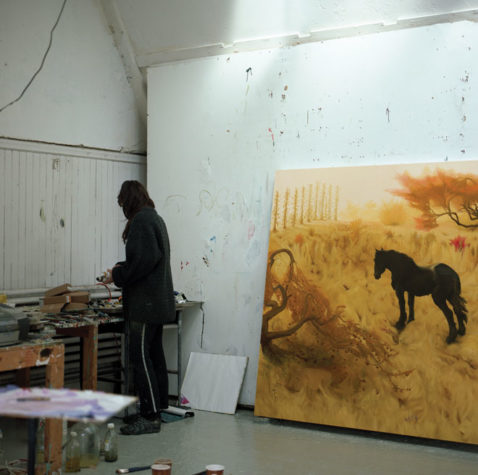 Inka Essenhigh's studio in the Lower East Side

Essenhigh: We drive to Maine, we rent a U-Haul, and we bring our painting supplies.

It is hell to enter or to leave New York. And it’s completely arbitrary when we leave for Maine. We pick a day but if we’re not ready we leave the next day or the day after that. Things are still going on in New York, people are inviting us out but we leave. Sometime in May we leave and we don’t come back until the middle of October.

Mumford: Our place is an old saltwater farm. It’s right on the shore. My dad taught math at Harvard. My parents bought the place in 1964. It was a summer house for them.

Essenhigh: When we get to Maine, we clean the house and clean the mouse turds out from underneath the stove. And then there’s an initial throwing myself in the water. I go swimming in the cold water and my nervous system is altered by the shock and then I can relax into my new reality. Maine is a magical place.

In Maine, I cut myself off from life in New York. I’m not on the phone. I leave a note on Facebook. It says, “Gone to Maine.” I check my email once a week.

Mumford: Last year, we built art studios on the land. Inka’s has running water and a full bathroom. Mine has a woodstove. We cut the lumber from
the land.

Essenhigh: In Maine, I wake up early. I go for a run and I go for a swim. Swimming here is like the ultimate spa experience, the ultimate cure-all. I wait for high tide. I look at the tide chart.

Mumford: There’s a sand spit on the property. Andrew Wyeth made some paintings there. It’s an easy place to go for a swim. It’s nice in the river. The water is warmed by the mud as the tide rolls in.
Essenhigh Steve and I have breakfast together. Then we go to our studios and paint until two. Then we have lunch. Then back to the studio. Then dinner.

In New York, I’m a city cook. I bring a grocery list to Whole Foods. They have everything. In Maine, where I shop, sometimes they have ramps and they have haddock, so I guess that’s what we’re having.

Mumford: We have a big fireplace in the house. The fireplace is roaring all the time. At night, we sit on the sofa in front of the fire. I read aloud and Inka rubs my feet. I’m in my own world in Maine. Right now I’m working on a series of paintings about the Iraq war. I’m painting in Maine but my paintings are not about Maine.

Essenhigh: Lately, I have been making paintings about Maine. This last one with the horse—it’s Molly, our friend Duke’s draft horse. She just died. Here, she’s in the field patiently waiting for the sun to rise. She’s patient, she’s older, she’s unoccupied; not like a young horse always busy doing everything.

Another one is of Mosquito Head. I went down there and I drew the rocks. Not verbatim, but close. I drew one sea god sitting on a rock—and another out in the sea looking like a cyclone.

Bisbee welds cold, hard, 12-inch-long steel spikes into soft tangles and ethereal tapestries. For years he had a pet mouse named Pepper who lived in his shirt pocket and sleeve. Wethli’s early paintings were figurative and realistic. His more recent paintings are abstract and geometric. In 2007 he produced a life-size wooden sculpture of a Piper Cub airplane.

Bisbee is a lecturer and Wethli is a professor at Bowdoin College. Together they run Coleman Burke Gallery in three locations.

Bisbee: We’re in New York to be part of a larger conversation. New York is the biggest conversation out there. To step into that is pretty exciting. But the space was really the catalyst.

Bisbee: What we do with Coleman Burke is extracurricular of Bowdoin. At the galleries, we pay utilities but no rent. It’s an example of the new economy that the landlord understands that art gives value to his building.

Wethli: Each gallery has a distinct vision. Brunswick and Portland are good for site-specific work. New York is a smaller space, better for two-dimensional work. We pick work that gets us excited, that gives us that tingle.

Bisbee: Maine is like an East Coast Alaska. New York artists see it as very far away. We like living and working here and then taking our eggs to town.

Bradford’s paintings are playful, semi-abstract, clairvoyant renderings of haunting symbols and scenes—swimmers at night, ocean liners, ice skaters. She is represented by Edward Thorp Gallery in New York and Aucocisco Galleries in Maine.

Bradford: On Mere Point, I live in a rambling farmhouse. It’s probably over 200 years old.

I’ve had the house since the early 1970s when old leaky farmhouses were not very sought after in Maine. Now people drive by and ask if it’s for sale. There’s a barn next to the house that I made into an painting studio.

I rent the place to Bowdoin students for the academic year. I leave when school starts and come back when it ends.

There’s an underlying nautical whiff in my work that must come from Maine, although New York has that too—Manhattan and Brooklyn are islands too.

Right now, I’m painting swimmers and ocean liners. The swimmers in this painting, they’re survival swimmers, swimming towards Manhattan, swimming towards a goal, swimming naked, swimming through the night. To create a fictional world is such a big part of painting; it makes me feel like a performer. In the city my strongest experiences are in a dark theater viewing a concert or a movie or a play. In the country, my strongest experiences are usually looking out to sea. I’m interested in nature and culture—how they conflict and reinforce each other. An ocean liner is the perfect example of this.
When I get out of the car at Mere Point, I can smell the sea. It always surprises me. The funny thing is that after that I don’t really smell it anymore.

In the spring, the frogs are peeping—that’s a holy sound.

The air is million-dollar air. Salt-washed air, really it’s just about the best thing to have really salty air.

The house smells like cooked vegetables. It’s full of sunlight, which my place in New York is not.

I like the moonlight. Moon shadows come in through the windows of the house and across the lawn. There are no moon shadows in New York; there you hardly notice the moon.

I’m a studio artist. I work alone. I have to pull out images and ideas from my imagination. To do that, I need solitude and stamina.

During the winter, I have wonderful friends who send me emails about the weather in Maine. They’ll tell me that the apple trees are in bloom, or about the way the snow feels under their feet. In New York, I listen to MPBN on the radio. I daydream about Maine. In Maine, I don’t daydream about New York. I get enough of New York when I’m there.