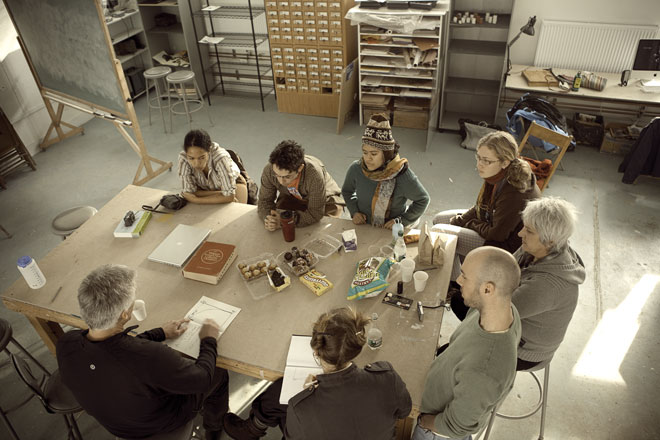 The poster advertising the weekend session said, WE WILL HAVE 48 HOURS TO SAVE THE WORLD... ITS SORTA GOING TO BE LIKE THAT SHOW 24 BUT WE WILL BE USING DESIGN AND PIZZA WILL BE INVOLVED. The group focused on Haiti and ultimately devised a website based on the blitz: papyioneffect.org 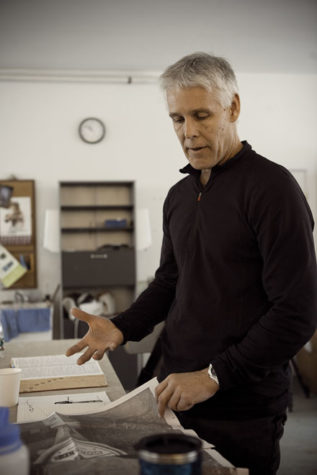 Bielenberg with the tools of idea generation 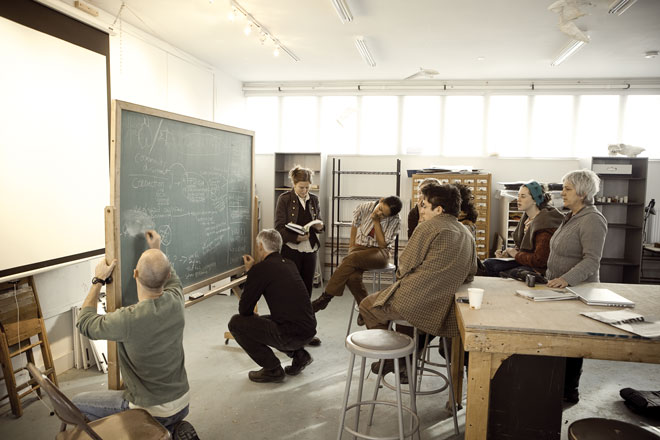 Bielenberg at the board with College of the Atlantic students, during a 48-hour blitz. 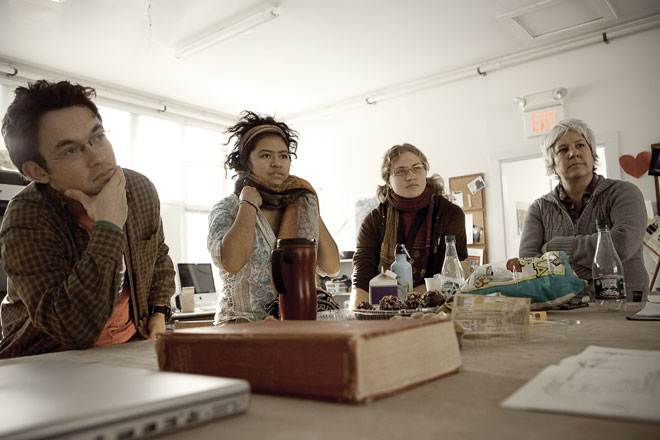 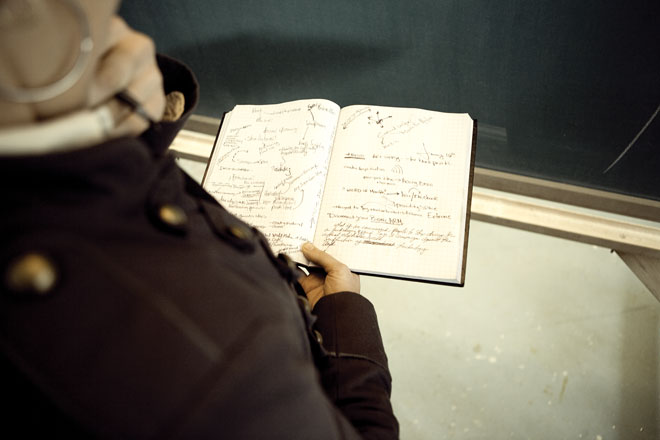 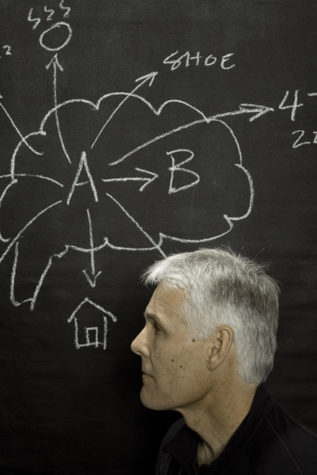 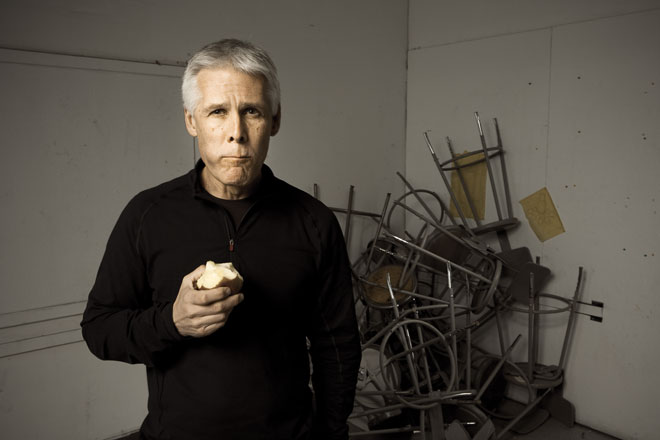 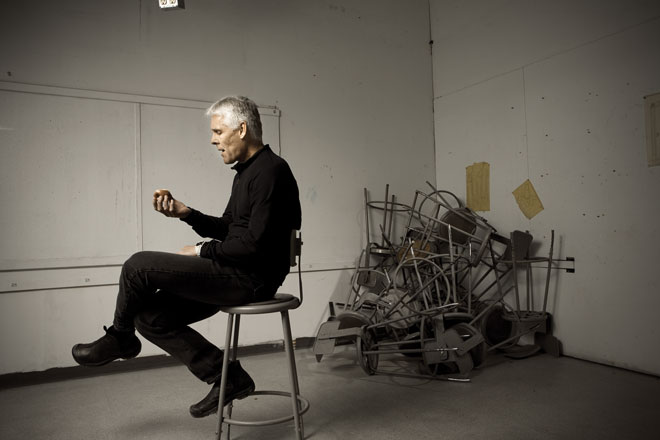 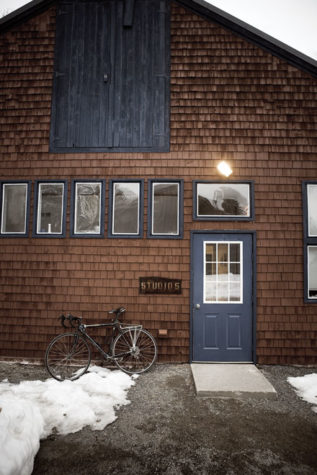 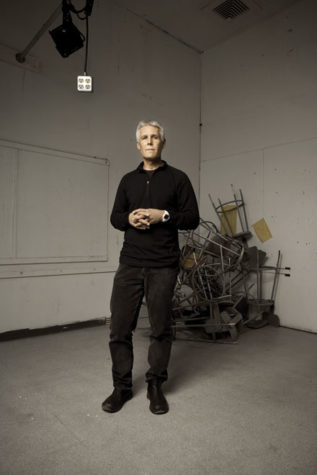 John Bielenberg at the College of the Atlantic, Bar Harbor, Maine

John Bielenberg discusses: Thinking wrong and doing right, living in an unprecedented time at the edge of the earth, the fearlessness of Icelanders, and the importance of pie.

John Bielenberg is an expert in thinking wrong. A partner in the San Francisco-based design strategy firm C2 (“Creative Capital”), Bielenberg lives in Belfast, Maine, where he started Project M (“Mentor) in the summer of 2003. Project M is a mental gymnastics camp for young creatives who are already inspired to contribute to the greater good, but are looking for a platform to collaborate and generate ideas and projects bigger than themselves. In the coming year, Bielenberg will convert socially-minded catalysts to “think wrong” in Saudi Arabia; Frankfurt, Germany; Hilo, Hawaii; and The Pine Ridge Indian Reservation in South Dakota, among other locations, including one in Maine.

Bielenberg wears a black wristband that says, “THINKWRONG.” He is always ready to jump the tracks of lateral thinking if that means he can find a path to change.

He is actually, and not abstractly, concerned with pressing social issues: from an empty lot in Detroit to humanity’s stress on the world’s resources. He has a serious voice and a playful mind. His home base is the Bielenberg Institute at the Edge of the Earth in Belfast, Maine.

M: How did you find your way to “The Edge of the Earth”?

JB: Since about 1990 or so, my wife Dee and I began an attempt to get out of the rat race. We had a map that filled an entire wall of our house in San Francisco, and every time we heard about a place or saw a movie that seemed interesting, we’d put a pin in the map and visit those places. A River Runs Through It put a pin in Bozeman, Montana. Places like Taos, New Mexico; Boise, Idaho; and Nelson, British Columbia made the map. I ended up moving to Boulder, Colorado, for three years, but found that the rats were following us.

Moving was tied in to having kids. What we found was that there’s no utopia. It was hard to put together a pie chart that had everything we wanted in the amounts we wanted. My wife was in the fashion business, and she was working with a small software company in Camden that had production software for the garment industry. She loved Camden, and we ended up buying a vacation house there. I went on a bike ride one summer, came back and said, “Let’s just move here.” Then we discovered Belfast; it’s a little bit funkier, and less on the tourist route.

M: Did the move to Maine change the way you were working?

JB: I’m still a partner in C2— with Erik Cox and Greg Galle—which does design, brand strategy, and idea generation. We run “Think Wrong Tanks” around creativity and alternative thinking for corporations. I spend a quarter of my time at our studio in San Francisco. But moving to Maine allowed me to develop Project M, to inspire young creative people to shape a more positive future. This came out of my experience of teaching in California for over ten years, but also just living in an unprecedented time of tipping points: climate change and the end of peak oil, deforestation, species extinction, and the rise of the middle class in India and China. The status quo is not acceptable.

M: What are our options?

JB: You can be pessimistic or optimistic. The pessimistic view is that we’re doomed eventually. Or the optimistic view, which I prefer, is that you realize design, creativity, human innovation, and invention are really the only ways that we can change course and our behavior.

Once I made the choice to be optimistic, I looked at who could make that shift. It was not going to be old people—they have what I call “calcified synapses.” Once you reach a certain age, you pretty much just follow what you know. And we couldn’t wait until young kids are old enough to be in positions of power, it wouldn’t be fast enough. So Project M focuses on the 20-to-30 age range and tries to infect those kids with the idea that they can have a role in the future to shape the greater good. In the seven years that I’ve been doing Project M, I’ve seen a tidal wave of interest.

M: What is Project M?

JB: We have four components: [1] There are the original sessions with a group of ten people for two or four weeks. We go someplace, completely immerse ourselves: meet people, talk, photograph, figure out a project, and do it. [2] We’ve also started Project M labs. These are places where there are projects happening throughout the year, usually staffed by alumni of the Project M sessions. The first was in Alabama, which is running now. We’re starting one here in Maine, one in California. [3] A third piece is ventures. Sometimes Project M creates things that have an afterlife. For example, a group in Maine went down to Alabama and
built “Pie Lab.” It’s a pie and coffee shop up front and an operating design studio out back. It’s an interface, a way to integrate the projects with community members. The conversations drive ideas, which drive design projects. We’re planning on opening more Pie Labs around the country. Another venture is Nada Bike, which I call “Zen and the Art of Bicycle Maintenance.” It’s really not about bikes as things, but about empowerment, mobility, and freedom from oil and marketing. You become a member of Nada for $100. Your membership card is a raw bike frame. [4] And recognizing that not everybody can take two or four weeks out their life, we also do “blitzes,” 48-hour projects—condensing Project M into the shortest time possible—to give people a taste of our process and methodology and hopefully create something out of that.

M: How do you approach sessions or blitzes?

JB: I don’t come in preloaded. It’s about the group figuring out what they want to do together. I want them to go through the experience of being social entrepreneurs, not waiting for a project, but finding something they feel is meaningful, and they’re passionate about, and then figuring out how to actually do something about it. My job is to push and pull. Thinking wrong is a big part of the process and philosophy. If you want to come up with truly new, innovative ideas that can potentially be more effective in solving these various problems, you cannot only follow pre-existing synaptic pathways in the creative process.

M: So part of your job is to be disruptive.

JB: Yes. And I have a toolkit for that. In the blitz we did at College of the Atlantic, everyone was thinking about Haiti. So we divide into small groups. Each group picks two numbers. A number between one and 300 and a number between one and ten. Let’s say a group picks 185 and two. You pick up an encyclopedia and turn to page 185 and the second word down is their word—horseshoe. They take that horseshoe and spend half-an hour free-associating. They can rearrange the letters to form other words, or it can remind someone of riding lessons which makes them think of black boots, which brings up licorice. You create a mind map off of horseshoe. At the end, you see if there are any connections between Haiti and all of the stuff that you’ve randomly generated. It’s interesting when you force the brain to make connections that never would have happened if you didn’t start with horseshoe.

M: You seem to have a fascination with the human brain. How conscious are you of your own thought patterns?

JB: I’m aware of this all the time. We are all creatures of habit—that’s how we’re designed. If you’re in a restaurant and you get a glass with clear liquid in it, you drink it. You don’t test it to see if it’s hydrochloric acid. There are certain assumptions that allow us to exist in the world. It only becomes problematic when we’re trying to innovate or be creative, when there’s a functional reason to think wrong.

M: You’ve taken Project M to many different types of communities and cultures. How does the experience differ?

JB: The first year we went down to rural Alabama. Everybody was from the North and came down with existing ideas about the deep South, about civil rights, about segregation and discrimination, ready to do something based on those preexisting expectations. As outsiders, it’s dangerous to do that. We had a backlash from a certain part of the community because of the project we did, which was to raise money to buy water meters to hook people up with fresh water. You would think that would be a benign issue—who’s against hooking people up with water?—but you’d be surprised. So we learned how to be more sensitive, how to be smarter about listening.
But I’ll contrast that with Iceland last February. This was when the economy of Iceland collapsed, and they overthrew the government, so the group of forty Icelandic students did projects related to that political and economic collapse. I realized that in Iceland there’s a lot of personal freedom. There’s a lack of racism and discrimination because the culture is very similar. There’s no litigation, so people are kind of fearless. There’s no crime. There are no murders. Police don’t carry guns. I was amazed at how courageous the students and even the institution, the Iceland Academy of Arts, were. As much as I learned in Alabama, it was almost the opposite in Iceland. Those kids could have done anything and they would have been embraced. So the places where we work influence the projects quite a bit—and they differ radically from one place to another.

M: Who is thinking so wrong that it’s right?

JB: My partners at C2 and I have recently launched MavLab which uses Project M
processes to address big important issues. The d.school at Stanford University also uses a lot of this type of thinking. There’s a guy named Paul Polak, who started D-Rev: Design for the Other 90%, who’s trying to change the world through design-thinking and tackling problems in unique ways. There’s a young woman named Emily Pilloton who has an organization called Project H—as in humanity. There’s a school in Denmark called KaosPilots. And of course, anybody who’s interested can contact me through Project M.

To hear John Bielenberg speak about Project M
in person on April 27th, register for the Tech Maine event at: techmaine.com/uuug