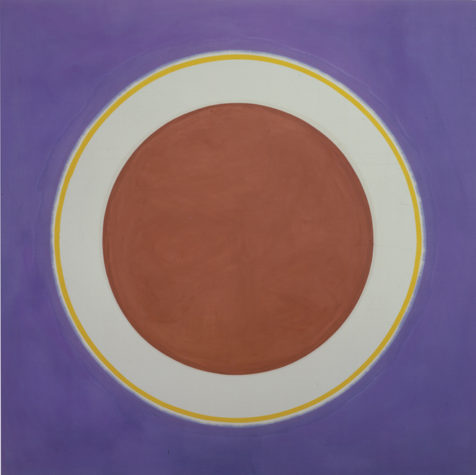 In 1994, the writer Jamaica Kincaid met Paige Rense, the editor of Architectural Digest, in North Bennington, Vermont, where they both lived. Rense introduced Kincaid to the man she had just married, the American color-field painter Kenneth Noland. The three became “old hat to each other” in a small town that, according to Kincaid, Rense brought to life. When Rense and Noland moved to Port Clyde, Maine, in 2002, Kincaid says it was as if “the town were nothing once again.” Noland died at his home in Maine on January 5th of this year. He was 85.

This is just what I would say to him right now, if this subject of Ken’s presence came up, and he would know just what I mean, for he always knew just what I mean or, as the case sometimes, meant! For even now, I hear his voice on the telephone saying, “Hi honey, now listen…” Or seeing him in his studio with small pots full of paint in colors that were familiar, strange, soothing; and paintings on the walls, in various states of completion, and that final state, completion, only he would know.

Along with Ken, came Paige, his true love he said to me, and they are so wended together in my imagination, Ken and Paige, impossible for me to think of one without the other: Ken and Paige. For here is this: They had just returned from one of their travels where they had stopped off in North Carolina, not far from where Ken was born, to choose the place where they wished to be buried together. The whole idea of dying is so disagreeable to me and so I am always horrified and fascinated by people who happily accept it. I made them recite to me the siting of the mausoleum and the design of it and the materials chosen to make the structure. And they did, all the while taking turns saying, “Of course, I’m going first” (Paige). “No honey, I’m going first” (Ken). Eventually they stopped and I said, “How can you even think of this?” And Ken said, “Oh you know Paige, she likes to do houses.”

Once, I wanted to thank him for being kind to me during a difficult time in my life. And with that in mind, I dried one leaf each of Petasites japonicus and Astilboides tabularis. These leaves are the size of a baby and could only be dried by laying them between sheets of newspaper. They didn’t turn out as I had imagined they would; I had thought that their gigantic shape and vivid colour would in some way resemble one of Ken’s paintings, or refer to them, or something like that. Instead, they just lay there all shriveled and dull. But he thanked me and asked me appropriate questions regarding the plants that the leaves came from and the process of preserving them. Then he said, “So, honey are you writing?” I wasn’t and I could see that it was his way of reminding me that I should.

So, I send love to Ken, always.