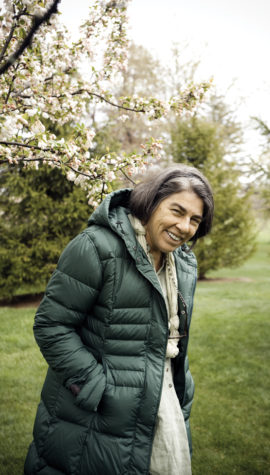 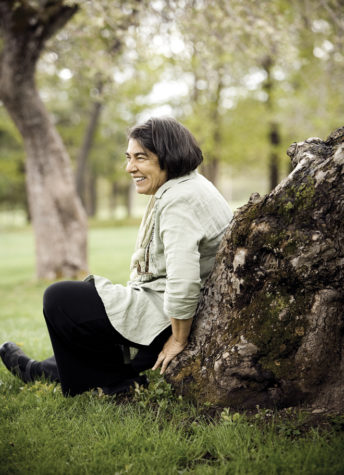 PROFILE-June 2010
By Peter A. Smith
Photographs by Jarrod McCabe

First she went back to the land. Now, she’s returning to her childhood passion: art. This summer, Burts Bee’s founder Roxanne Quimby plans on hosting an artist-in-residence colony in Portland’s historic arts district.

Roxanne Quimby grew up in Cambridge, Massachusetts. Her father was an engineer; her mother was a homemaker. She and her sister used to sell soap around the neighborhood. For a time, they had a stuffed animal business and even ran a mini-bakery. She didn’t have an allowance so Quimby made money making things—bracelets and jewelry—for her sister to hawk door-to-door. By age 5, she knew she wanted to be an artist.

When she left for college, she leaned left—much to parents’ disapproval—and landed at San Francisco Art Institute in 1969. The year she graduated with an MFA, Harvey Milk became the city’s mayor. At the time, she experienced a liberation of consciousness, a liberation that had nothing to with cities and everything to do with being out in nature. “I realized there was no way for me to make a living as an artist,” she says. “Very few artists actually make a living off of their painting. That was what I was doing. But I didn’t want to do commercial art and I didn’t want to teach, so I decided to go back to the land.”

Back to the land
In 1974, Quimby drove her 1963 Volkswagen bus with California plates, her pony-tailed boyfriend, George St. Clair, and a dog to northern California (“too expensive”), Oregon (“I didn’t really like the climate”), and Vermont (“just like California”). Following the footsteps of homesteading gurus Helen and Scott Nearing, Quimby moved to Guilford, bought 30 acres with her life savings, and built a 20- by 30-foot cabin. They chopped wood. They carried water.

“There was no money. And there was no way to make a living up there. I’d burned through three waitressing jobs. I got fired from one after another for some ridiculous thing, like I shaved my head and they fired me.” The bus died. Quimby gave birth to twins, Lucas and Hannah. Art was simply a luxury she couldn’t afford.

In 1984, she met Burt Shavitz, a long-bearded gentleman, who taught her about bees. Quimby began dipping candles, making balms, and cooking up rubs and salves. Her first craft fair, she made $200. From there, Burt’s Bees grew exponentially—into a full line of natural, earth-friendly lip balm, cosmetics, and beauty supplies. Quimby ran an efficient, goal-oriented business and found that, at the end of the day, she couldn’t take off the corporate jacket—and didn’t have time for making jewelry, sewing, or designing clothes.

“I always exercised my creativity with packaging design and product design, which was very fulfilling to me. But it wasn’t an exploration of your inner life. It’s just like, ‘Well, what do you think people are going to buy? You think they’ll buy this, or you think they’ll buy that?’ It was like this part of my life that I filed away. And it doesn’t leave you.”

Back to the city
Since 2001, Quimby’s nonprofit, Elliotsville Plantation, has purchased over 120,000 acres of undeveloped land in northern Maine toward what she hopes will be the North Woods National Park (complete with a writer-in-residence program). Around Portland, Quimby has quietly been looking into historic properties—an old church at 10 Mayo Street, a Queen Victorian at 660 Congress Street, and others—to launch a new program to support the arts.

“Congress Street is probably the grandest, most important street in the state of Maine. Parts of it are fine, and parts of it have fallen into disrepair and need help. And I said, ‘We can do a lot with one program. We can support artists. We can support the city; we can support historic building. We can support this neighborhood that needs an anchor of something happy and uplifting.”

This spring, the Quimby Colony put out a call to artists all over the world for one of Portland’s only artist-in-residence programs. When the city approved the project, artists and art supporters showed up—Andres Verzosa, Donna McNeil, Mark Bessire, and Brook DeLorme—to talk about the need for a program downtown. (Detractors suggested that the city focus on affordable housing.) Quimby hopes that the colony will create a little economic engine, starting with textiles.

“I had heard that Mayor Bloomberg was interested in downsizing the Garment District in New York from 2 million square feet to 200,000, because he wanted more hotels and restaurants. So, I thought, ‘Well, we’re not that far from New York. Maybe Portland could have this center of commerce around garments.’ We used to have textile mills in Maine. We won’t do it on this big textile scale like they did, and pollute the rivers, and everything else, but just support little independent designers who are doing micro-businesses, carving out little niches for themselves.”

This year, the Quimby Colony will offer four to six artists studio space, apartments, three meals a day, and a travel stipend. Once they’re accepted into the program, there will be no other requirements. “You don’t check to see if they’re working, or say, ‘What did you produce?’ You’re not evaluated that way. If somebody just needs three months to cocoon, then that’s OK. Who are we to say, ‘No, no. You have to do it this way’? We think that there’s probably a lot to learn there, which is why we’re going to keep it really small until we’ve gone through a couple of cycles.”