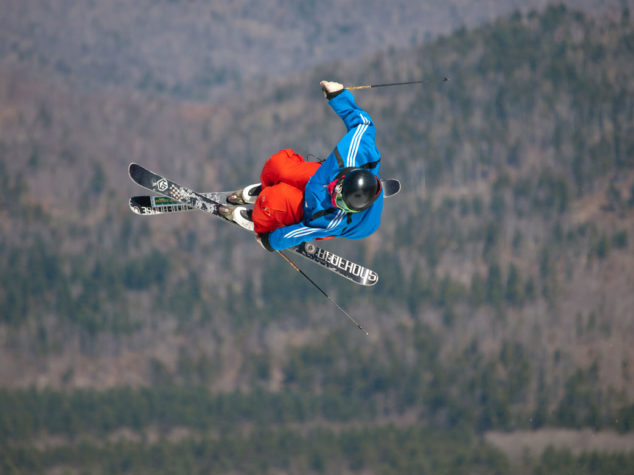 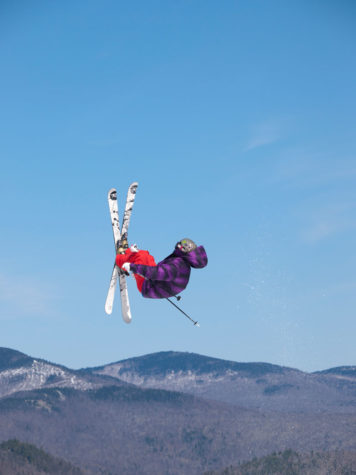 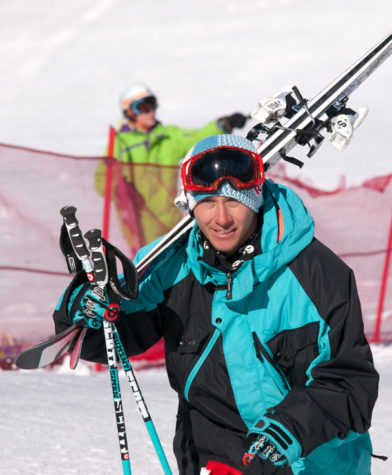 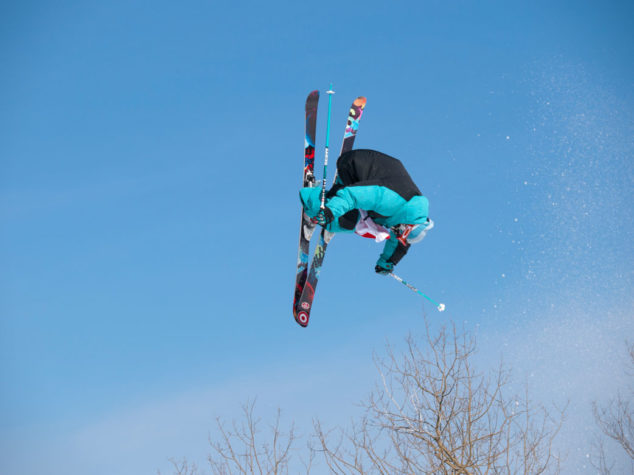 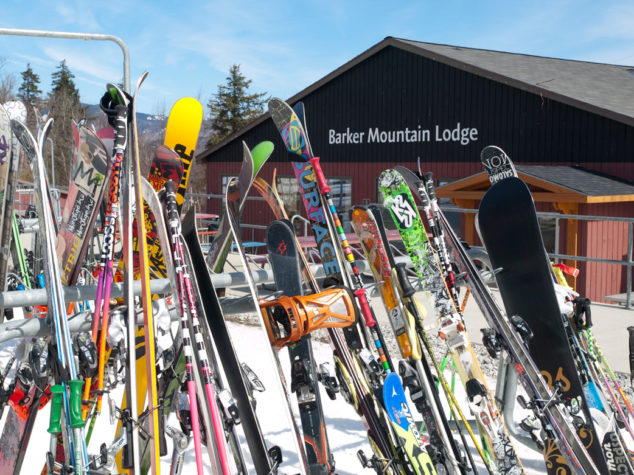 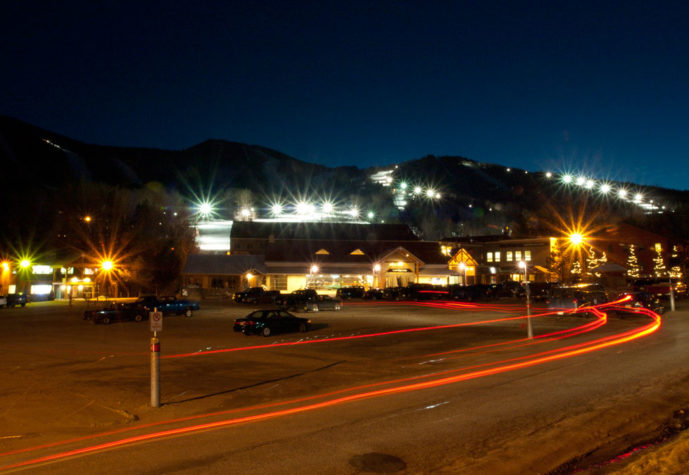 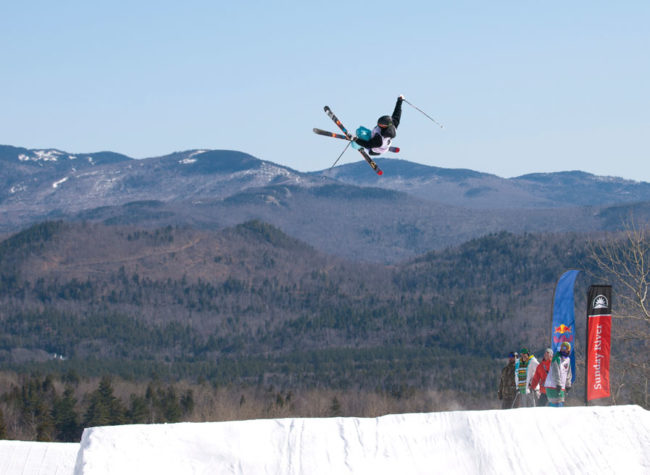 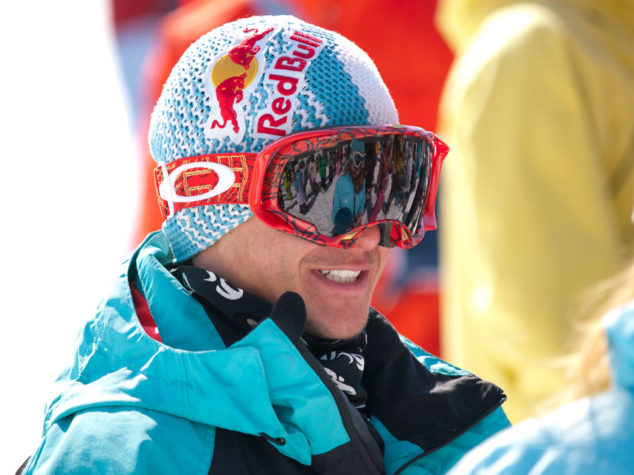 Dumont designed his own Salomon ski apparel and has created a clothing company, Empire Attire, with his own signature line of gloves, bandannas, and hats. 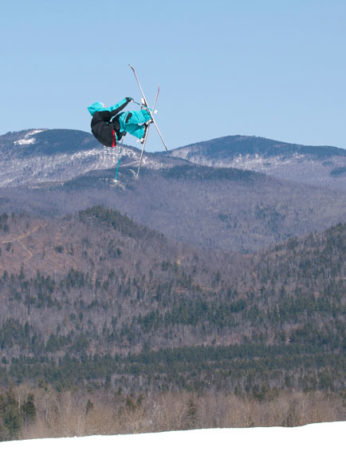 Dumont is legendary for launching huge air, with a Guinness world record for a 35-foot quarterpipe jump he tagged in 2008. 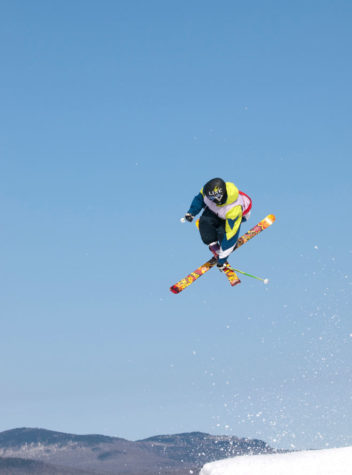 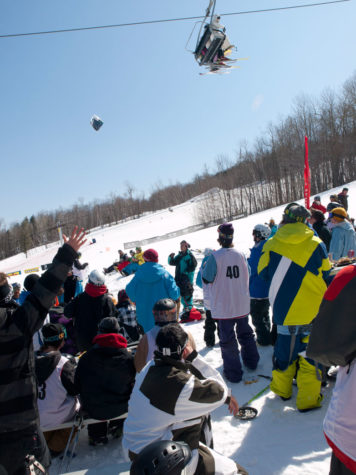 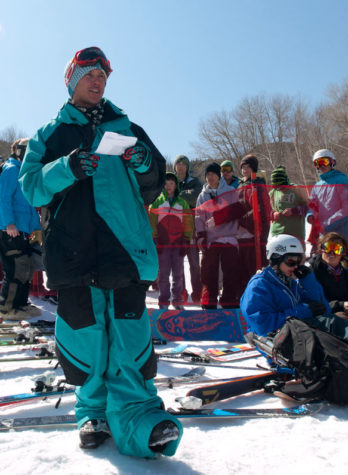 Simon Dumont has become a legend in the world of freeskiing. He’s smashed big-air records and made the big time with major sponsors and film spots. This young Mainer is also fiercely competitive. So why is he best friends with his competition?

Like many Maine kids, Simon Dumont learned to ski the slopes of Sunday River in a harness, with his mom holding the reins, at the ripe age of three.

What makes this story different from that of most is that now, at age twenty-four, Dumont has a list of sponsors that reads like a directory of ski-magazine advertisers: Salomon, Oakley, Nike 6.0, Giro, Red Bull, Target, Kicker, and of course, Sunday River. Dumont is one of the most decorated freeskiers on the planet. He has a reputation for flying high in the air, and a slew of medals from the Winter X Games. Dumont even grabbed a Guinness World Record when he soared 35 feet above a quarterpipe (about ten stories in the air), a feat he staged and stomped on his home slopes of Sunday River in April 2008.

Standing at just five-feet seven-inches tall, Dumont’s compact stature belies his celebrity in the international freeskiing circuits of Sweden, New Zealand, and Canada, and when he comes home to host the Dumont Cup at Sunday River—his own special-designed pro-am slopestyle event—he draws a crowd of crazy fans stateside, too.

While thousands come just to watch, stand in awe, and queue up for an autograph, seventy athletes from across North America come to compete alongside Dumont and his famed freeskier friends: Tom Wallisch, Jossi Wells, Mike Riddle, Peter Olenick, and Colby James West. You see, Dumont travels everywhere with an entourage of competitors. His best friends are his fiercest competition in freeski events from Europe to Japan to New Zealand. “Simon and his friends live together, they travel together, they ski together, they cheer each other on,” says Dumont’s mother, Barbara. “These freeskiers are really tight.”

Since The Dumont Cup was launched in 2009, “dinner at Simon’s” has become a tradition. Following the first day of competition, his parents’ mountain home in Bethel is overrun with thirty freeskier buddies. And this isn’t just pizza night: the Dumonts serve up Maine-style surf and turf of lobster and elk. Dumont likes to be surrounded by friends and family, but he also likes to win. And when dinner gives way to poker, Dumont usually does just that.  In the words of famed Swedish freeskier Jon Olsson: “If Simon wins, then he’s happy. And if Simon’s happy, then everyone’s happy.”

In addition to being skiers, the Dumonts are also designers. Barbara designed and decorated her son’s homes in Summit County, Colorado (where he trains), and in Northport, Florida (where he chills with his friends in the off-season). Dumont designs his own Salomon outerwear each season, and in 2008 he launched Empire, a ski-attire company, with his lifelong friend Jake Largess of Bethel. Before she headed off to art school in New York City, Felicia Dumont sold her brother’s Empire gloves, bandanas, and accessories in her former store in Bethel for a season.

Dumont has a reputation for pushing the limits. He always excelled at sports—soccer, golf, gymnastics—even from a young age. “When Simon was younger, we’d travel three times a week to Lewiston for gymnastics,” says Barbara. “He has such good aerial awareness on skis because of his gymnastics background.”

“When Simon was eleven, he was doing 720s and backflips on rollerblades at the skate park and on snowblades at the mountain,” says Brian Schroy, a childhood friend of Dumont’s from Bethel who now works for Freeskier Magazine. “It became the town project to get Simon off his blades and onto the freestyle team at Gould. When he went to his first national mogul championships at Mammoth Mountain, California, he did a 1080 in front of freeskier Pep Fujas and Greg Strokes of Salomon—that was the start of Simon Dumont.”

Dumont has since earned nine Winter X Games medals, including two gold medals—the first of which he won when he was seventeen. He is known for launching several stories above the half-pipe and executing huge twisting, inverted-turn aerials. Yet with big air comes big wipeouts, and Dumont has had a few frightening crashes. In 2004, he ruptured his spleen and fractured his pelvis after plummeting eighty feet when he overshot a jump while filming in Utah. At the 2010 X Games in Aspen, he was knocked unconscious during a half-pipe crash, and still went on to compete three days later. This January, Simon won another X Games medal—this time a bronze—after coming back from a hard fall on his first run.

“Simon is in competition with himself. He’s extremely competitive; he always has been,” says Schroy. “If he doesn’t get the best score, he questions himself, and sometimes the judges, as to what he could have done better. When he’s in a mood or he seems cocky, it’s because he’s not doing as well as he thinks he should be.”

“He is so competitive that he pushes us all to ski better,” says Tom Wallisch (aka “T-Wall” or “Walnuts”) of Salt Lake City. Wallisch won the first annual Dumont Cup in 2009.

When hosting his pro-am event at Sunday River, Dumont effortlessly transitions from emcee to competitor to crowd pleaser. In addition to the $10,000 first prize, the Dumont Cup provides a venue for young talent. The 2010 winner, Alex Schlopy of Park City, Utah, has since acquired sponsorships and film gigs. “I’m psyched to host the best freeskiing contest in the East,” Dumont says. “The Dumont Cup is an opportunity for kids to show their stuff and get noticed. The event is going to get bigger and better every year.”

“The Dumont Cup is Simon’s way of saying thanks to Sunday River,” says Mitch Lehman, a Bethel student at Telstar High School, Dumont’s alma mater. “It’s cool to see his pro friends like Jossi Wells and Tom Wallisch, but just bringing himself home is enough. He’s a pretty big hero in his hometown.”

Samantha Bell from Kennebunk, who is enrolled in the same Gould freestyle program that nurtured Dumont, says, “Simon is extremely hot. He’s so steezy.” (Note: Steezy is combination of “stylish” and “easy,” and it is generally attributed to snowboarders and skiers who make the execution of difficult tricks look effortless).
“I think it’s so cool that Simon is friends with the guys he competes with,” says Samantha’s brother Kyle (known as “Bubbles” when he’s competing).

“I have amazing relationships with my friends and my family,” Dumont says. “I get to travel the world with my best friends, who I happen to compete against. How could it be better? My mom and my manager Michael [Spencer] are two of my best supporters. I couldn’t do this without them. They take care of everything for me so I can focus.”

Intense, unwavering focus is key when it comes to big air. There are no written rules and no restrictions on how far and how high you can go in freeskiing—hence the name. “Simon goes bigger than anyone else. He is the front runner in freeskiing,” says Henrik “DaRockstar” Lampert of Manchester-by-the-Sea, Massachusetts. “I can’t even fathom where freeskiing might go next.”

So what is next for Simon Dumont, the small-statured skier who is too big for a nickname (though his last name means, fittingly, “of the mountains”)? He’s already appeared on the Ellen DeGeneres Show and the Tonight Show, been heralded by Powder and Freeskier magazines, and starred in countless ski films, including Transitions, a recent film produced by his friend Riley Poor of Poor Boyz Productions, which traces Dumont’s journey to skiing fame.

Dumont has his sights on the next winter Olympics. In fact, he’s petitioned the International Olympic Committee to include superpipe skiing (think huge half-pipe with 20-foot walls over which skiers launch high into the air and perform aerial acrobatics) in the Sochi, Russia, Winter Games in 2014. It’s an act of leadership that is reminiscent of Maine snowboarder Seth Wescott’s successful pitch for snowboard cross—a sport in which Wescott went on to win two gold medals.

No matter where he ends up, one thing is certain: Dumont will be back in Bethel on March 24 through 26 to host the third annual Dumont Cup. And he’ll be bringing along his steezy freeskier friends.