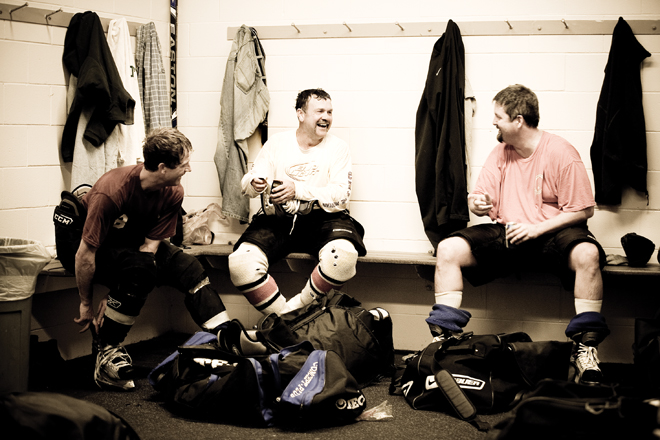 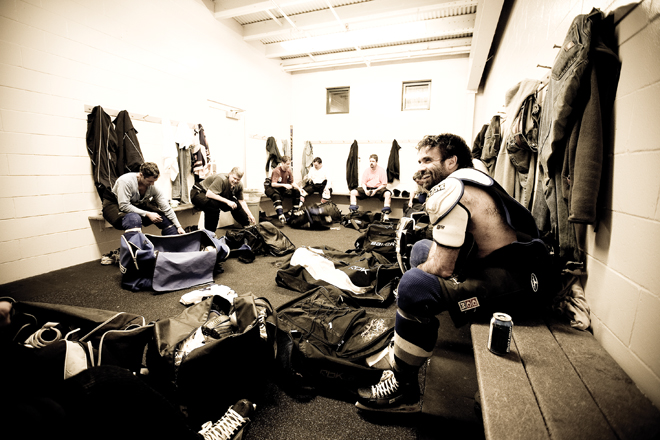 After games, the Doormats "let it all hang out figuratively and, unfortunately, literally," says captain Jamie Kuhn. 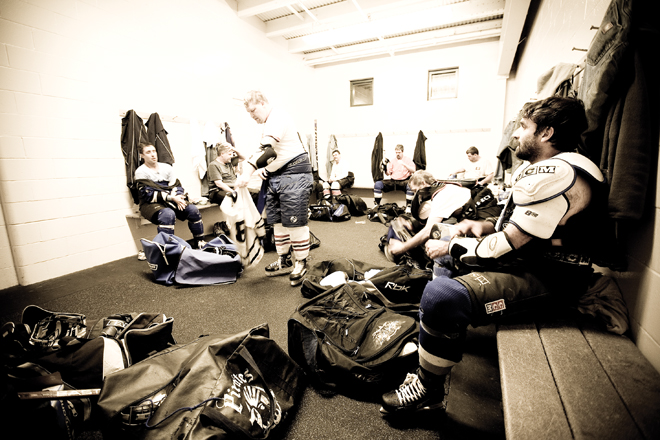 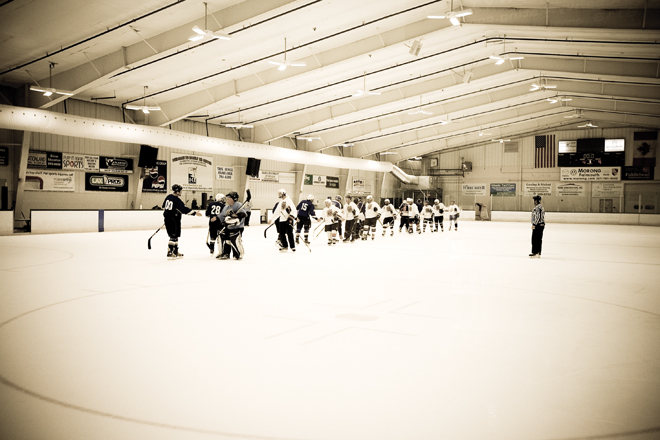 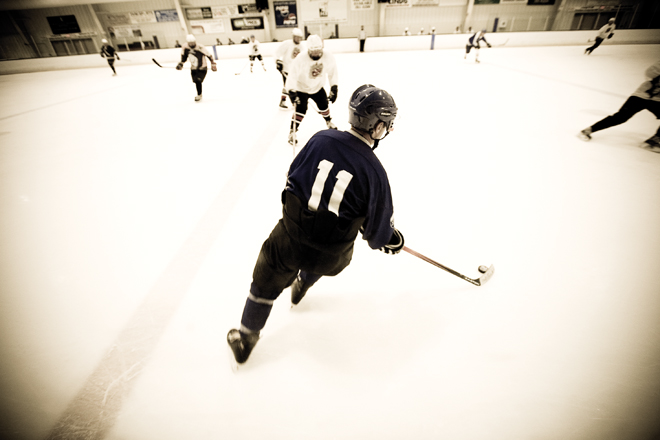 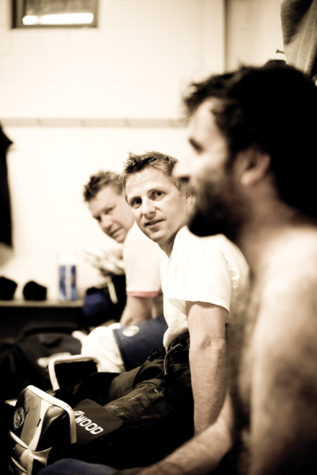 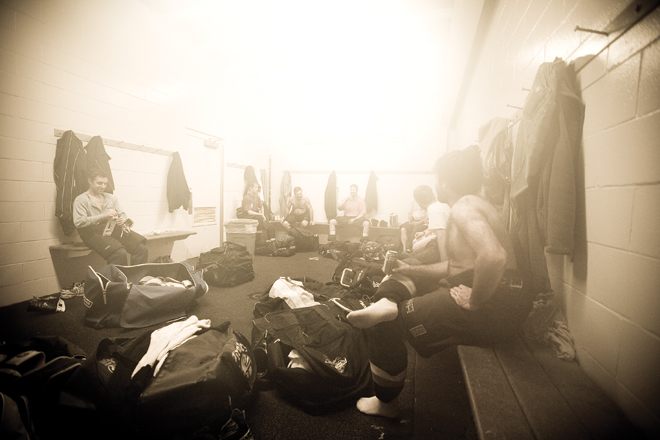 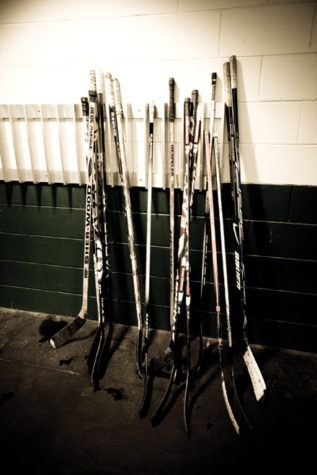 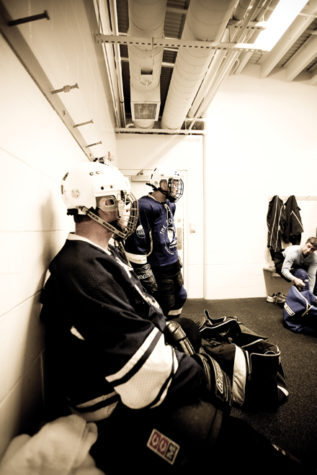 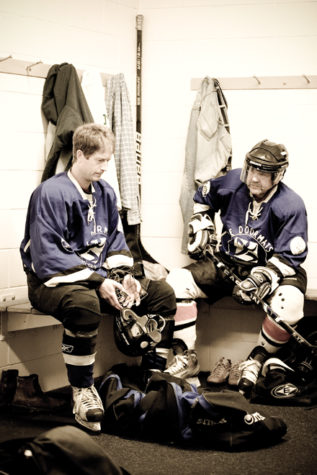 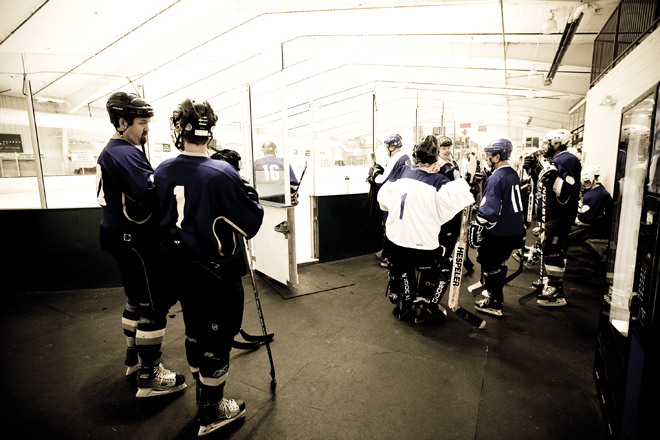 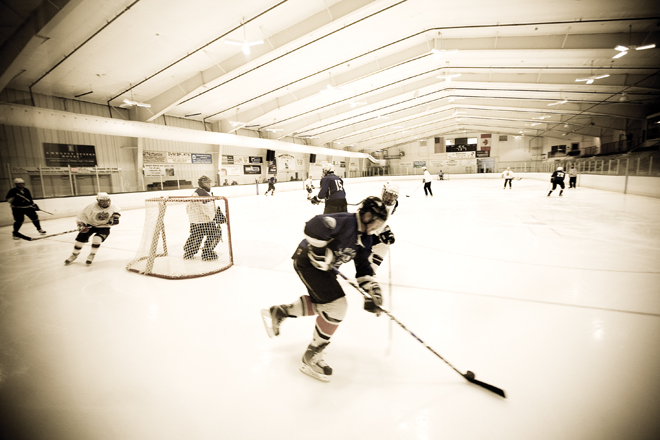 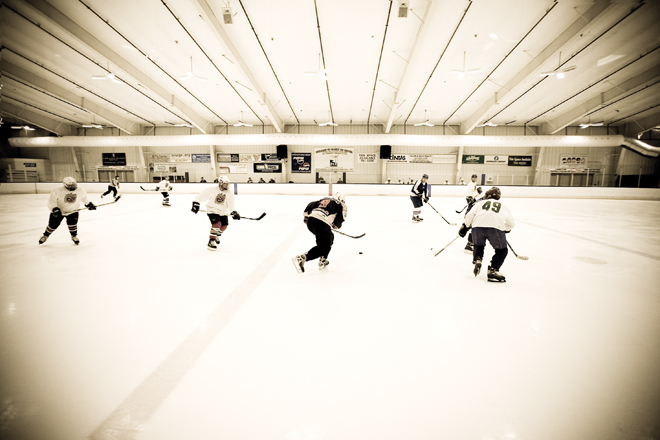 Edgar Morin, who also plays in Biddeford and Massachusetts, takes the puck. 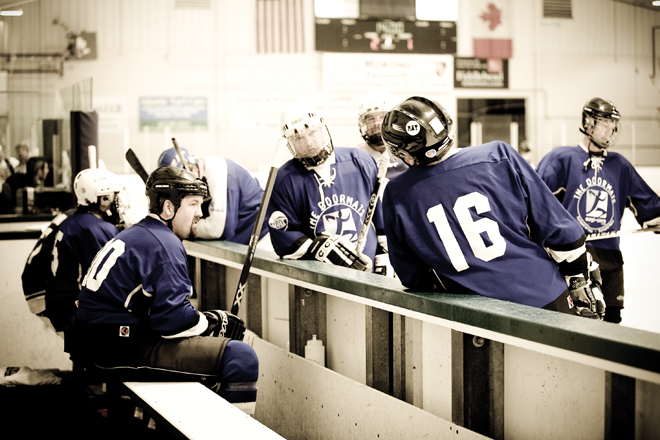 The players' jerseys feature the logo of a company sponsor and one of their own: A chubby guy holding a beer is tucked away on the sleeve. 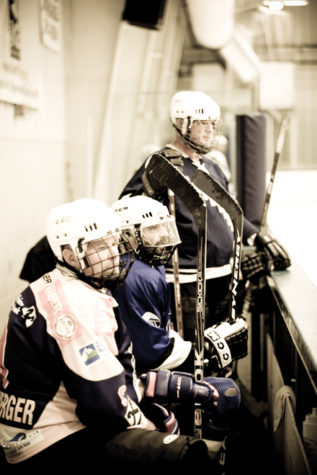 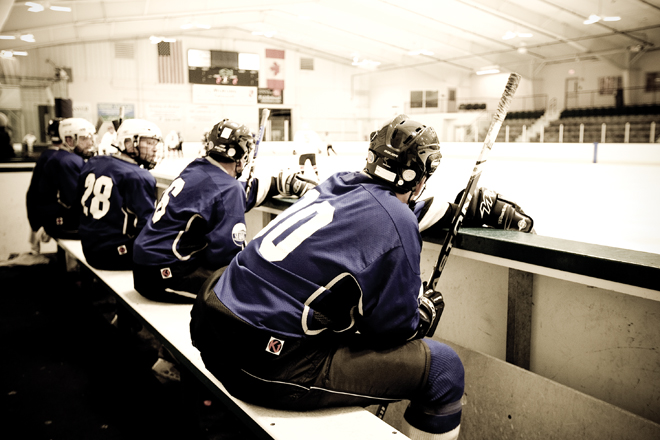 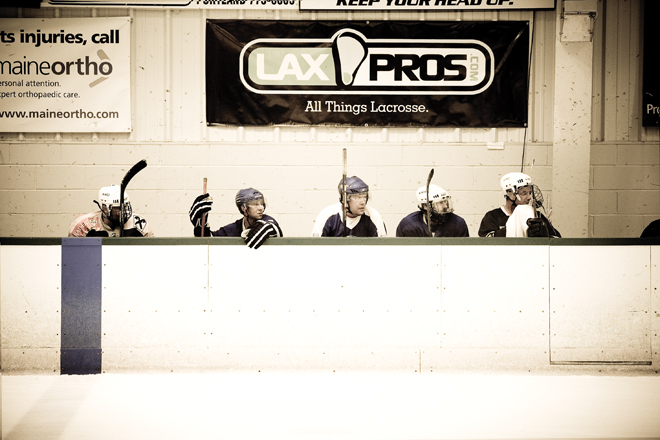 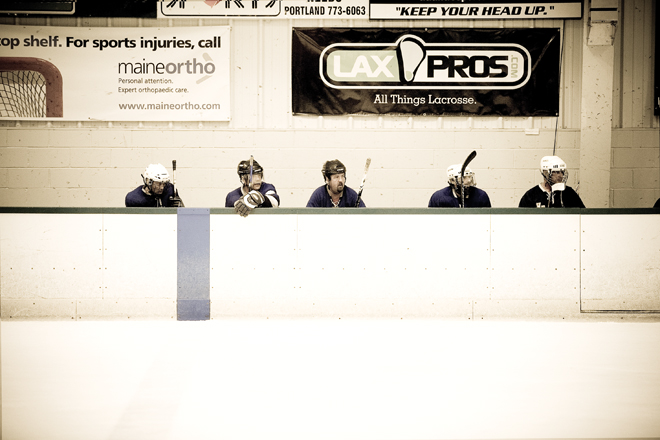 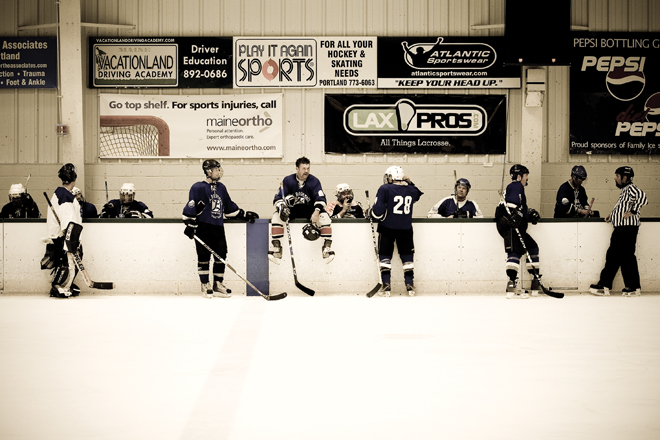 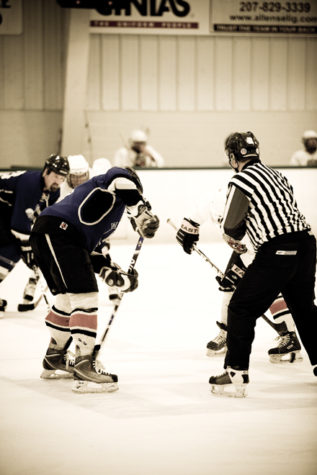 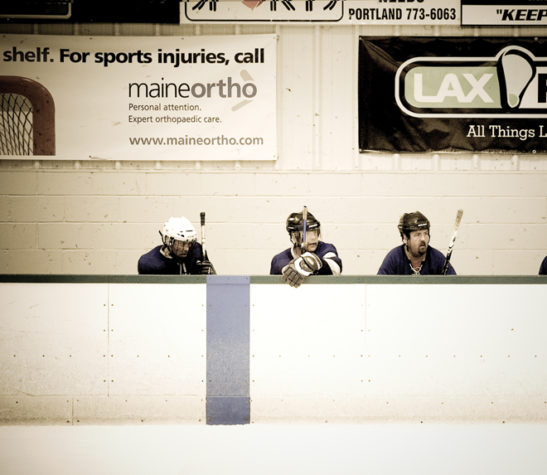 The guys change lines frequently, giving everyone equal time on the ice and bench.

On Friday nights when most of us are packing it in, the guys on the DOORMATS hockey team, a group of buddies in their 40s and 50s, are getting ready to take to the ice—and to laugh about it afterward.

When you’re the only female in a men’s locker room, you notice things that the guys might not. Like the way a group of men can have a running conversation that consists almost exclusively of trading barbs. During the time I spent with the Doormats, a hockey team that plays in the Greater Portland Industrial Hockey League’s over-40 age division, I learned that pretty much everything is fair game. If a guy is gathering his things for a shower: “Hey man, do you need a loofah?” If a guy brings up a triathlon he competed in: “Did they let you use a kickboard?” There was a token “your mother” joke and plenty of razzing about bungled plays out on the ice. And that, of course, is the PG version. “You’ll probably never get to see the locker room in its full glory because maybe you would become physically ill,” says team captain and goalie Jamie Kuhn, an orthopedic surgeon. “There’s sometimes color in the conversations—you know, not printable stuff.”

The postgame ribbing has been going on since the Doormats started skating together 12 years ago. At the time, the league needed another team to play in its “gentleman’s” (read: older) division. The office manager assembled a random group of guys who had expressed an interest in playing and, fully expecting them to get creamed, christened them the Doormats. The team lived up to its name, presiding over a 22-game losing streak. But something clicked off the ice. “Some teams, after the game is over, split up and leave right away,” says forward Pete Silverson, a pilot who, along with Kuhn and three others, has been with the team since the beginning. “What made the Doormats different was that after the game everybody stayed, talked, hung out, laughed. That’s how it was from day one. And nobody knew anybody.”

Gradually the team acquired some more experienced players and their record improved. “We thought about changing the name, but it’s kind of charming, don’t you think?” says Kuhn. In 2006, forward Gary McAdam, who played for the Buffalo Sabres, Detroit Red Wings, and other National Hockey League teams in the 70s and 80s, joined the team. Kuhn would run into McAdam, a medical sales representative, at the hospital and bug him. McAdam’s response: “‘I’m too old for this sh*t.’ And I didn’t want people to think I was playing to show them up or be some sort of hero.” But after a couple years, “I broke down—when you do something for as long as I did, you miss it every day.” Around the same time, forward Larry Caruso, another medical sales rep who played in the ECHL professional league, signed on. “Most of us played at least high school hockey, but we also have some guys who are not that experienced,” says Kuhn. “It just doesn’t matter that much.” The team has won the division championship twice—or was it three times? No one really remembers, or cares.

Still, during this season’s first contest at the Family Ice Center in Falmouth, all the guys have their game faces on. Starting time: 10:50 p.m. The brisk air tinged with a whiff of Zamboni fuel is enough to give a jolt to anyone who thought he (or she) was tired at this ungodly hour. There are mini pep talks on the bench, and a few players haggle the refs—yes, the league has actual referees suited up in black-and-white stripes, as well as an official scorekeeper. Guys on the Doormats and their rival, Yosaku (named for the Portland sushi restaurant owned by one of the players), receive penalties for hooking, holding, tripping, and slashing. Although checking is not allowed in any of the Greater Portland divisions, “there’s always contact,” says McAdam. But tempering the aggressiveness is a strong element of camaraderie. Between periods, men from both sides skate off the ice together, laughing. When Kuhn dives to prevent a goal, a Yosaku player yells from the bench, “Nice save, Jamie!” And if you happened to walk in when the third period buzzer goes off, you wouldn’t know the Doormats had just won nine to four. Everyone just grabs his gear and quietly skates off to shake hands.

The Doormats play every Friday night from October to mid-April, which is one reason people are able to kick back in the locker room after games—there’s no work the next day, and wives and children are in bed. Tonight, players sit on benches around the perimeter of the room, the reek of wet pads permeating the air. Defenseman Gregg Bechard, a pilot and one of the team’s original members, breaks open a case of Bud Lite and tosses everyone a can. Everyone, that is, except McAdam, who brings his own Miller Lite in a plastic grocery bag, calling it “champagne.” Guys take turns showering and changing in an adjoining room, emerging in sweats. But locker room veteran McAdam is more meticulous, spraying on deodorant and cologne, fluffing his hair with a brush, tucking his shirt into belted jeans, and stuffing dirty laundry into a separate sack. Which inevitably leads to “Hey G-Mac, what do you have going on later?” And “What’s in the purse?”

The bromance factor is what most players ultimately come for. “There’s the competition, and it’s a great workout, but the strongest draw for me is the social aspect,” says Kuhn. “When you’re in high school, college, just out of college, you have friends and coworkers and you’re hanging out. Then you have kids and all of a sudden your friends are the parents of your kids’ friends. It’s different and it’s never as tight. I guess that’s sort of an issue for middle-aged men, if anyone is interested in middle-aged men.”

Defenseman Max Barth, a neurosurgeon, saw a lack of social connection turn into a mid-life funk. Before joining the team around 2003, “I was working all the time and I’d come home and ask myself ‘is this it?’ I had everything and was still not finding that sense of satisfaction.” Lacing up skates for the first time in 20 years was a turning point. Being with the guys allows the players to, in his words, “revert to a more primitive, juvenile part of your personality.” (Come to think of it, the locker room is pretty cave-like.) “Just sharing some stories and laughs—that is part of what keeps our adult lives fresh and rewarding. The tragedy I see in many lives is people are never allowed to connect to that.”

For Barth and several others, one night of hockey a week doesn’t quite cut it. “I think all of us would play every day if we could work it into our schedules,” says Barth, who skates with another team on Sunday nights. Forward Edgar Morin, a vice president of sales for a solid waste equipment manufacturer, comes closest to living the dream: he plays on five different teams. “I don’t do the gym thing and I don’t like sitting around,” he says. For those who, like Silverson, can’t commit to more than one team, pickup games at the Falmouth rink and the Portland Ice Arena help “take care of the addiction.” Since 2008, several of the guys have also gone on an annual trip to Europe to play in international tournaments. “So we’re not the only knuckleheads out there with this type of passion,” says Barth.

Within the Greater Portland Industrial Hockey League, which formed in 2008 as a merger between the Falmouth and Portland adult leagues, there’s enough passion to make up 38 teams. Depending on their skill level, players can choose from divisions 1, 2, and 3, which are open to all ages, and the over-30 and over-40 divisions. “We are seeing a lot of growth,” says commissioner Ace Malette, who has added an average of two teams per year since the league started. “We’ve always had an influx of younger players, and with five divisions, people can play where they’re comfortable playing. Which means guys are staying in the game longer.”

Indeed, some players on the Doormats, which used to be in the over-30 division, might not have stuck it out had the over-40 group not been created three years ago. “I’m 56 years old,” says McAdam. “To play against 30-year-olds who have a lot of energy and get a little rambunctious sometimes—I don’t need that.” In the over-40 division, “it’s competitive to a point, but mostly we just have fun and try not to get hurt.”

If you’re thinking about dusting off your skates, Malette suggests going to the league’s website (gpihl.com) and completing a “free agent form.” These are used to fill spots (which, he admits, don’t come up that often) on existing teams and to create new ones. The GPIHL doesn’t have any female teams, but women can play with the men or check out the Greater Portland Women’s Ice Hockey league (gpwih.com). Anyone with a group of 10 or more interested players can also approach Malette about starting a team.

And if you’re dreaming of becoming a Doormat? “We have a fairly closed roster because, for the most part, people don’t quit,” says Kuhn. “But if it were the right guy, we would welcome him with open arms.”

That is definitely the reception I got. With this article, I hope to repay the hospitality by supplying more fodder for poking fun in the locker room.