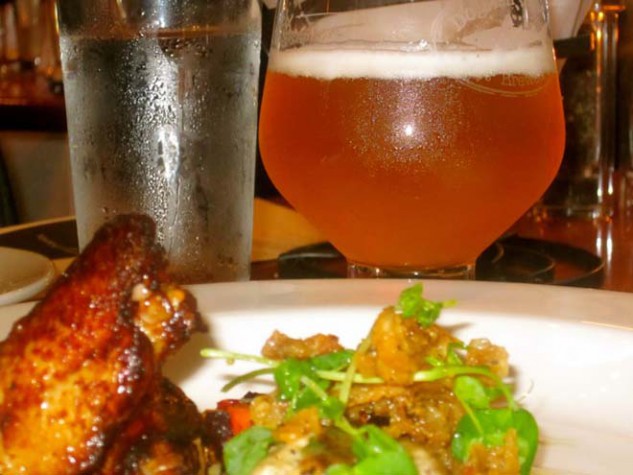 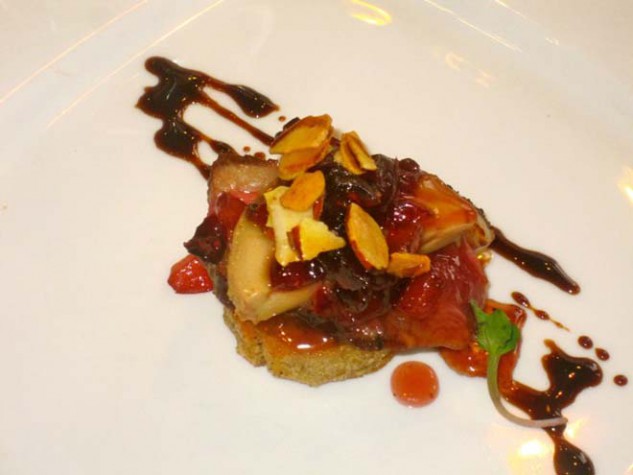 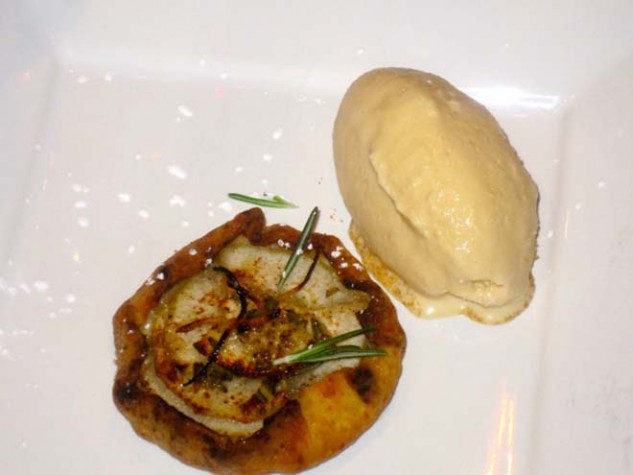 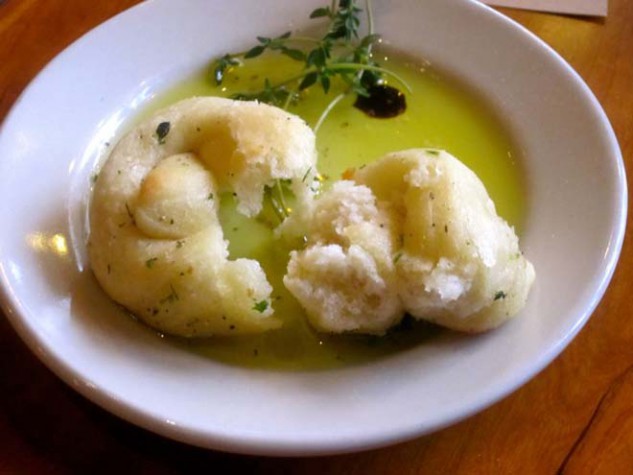 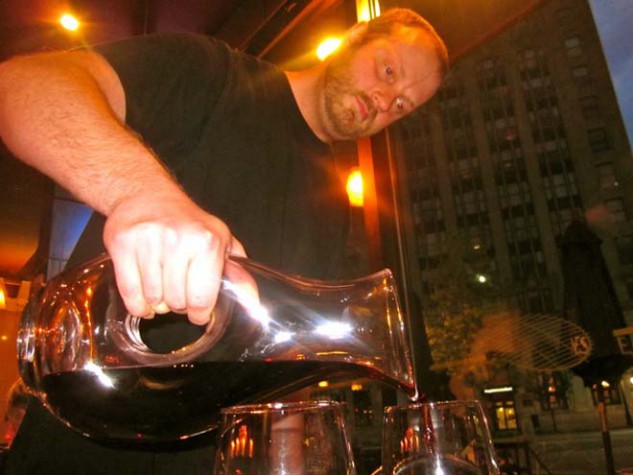 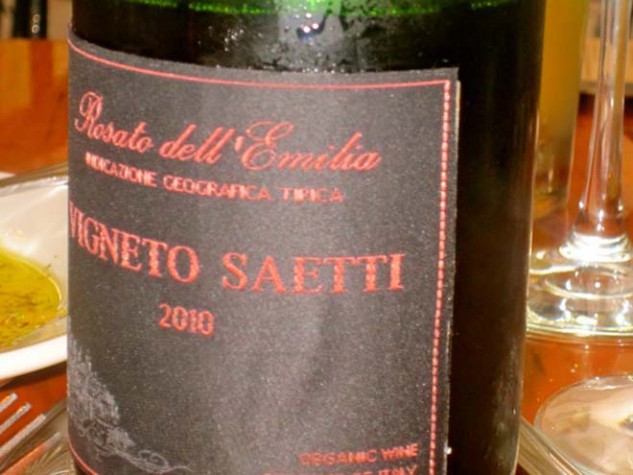 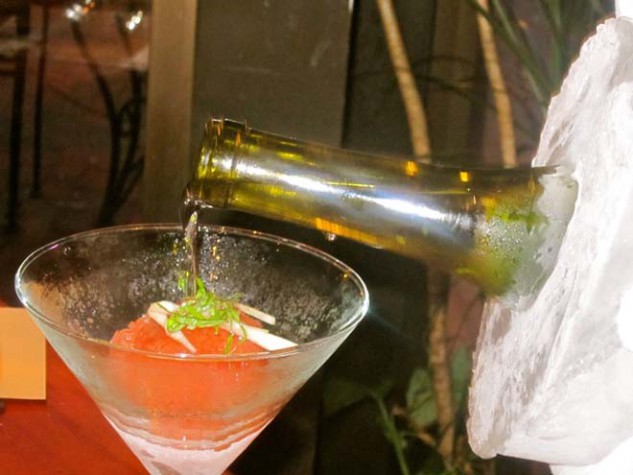 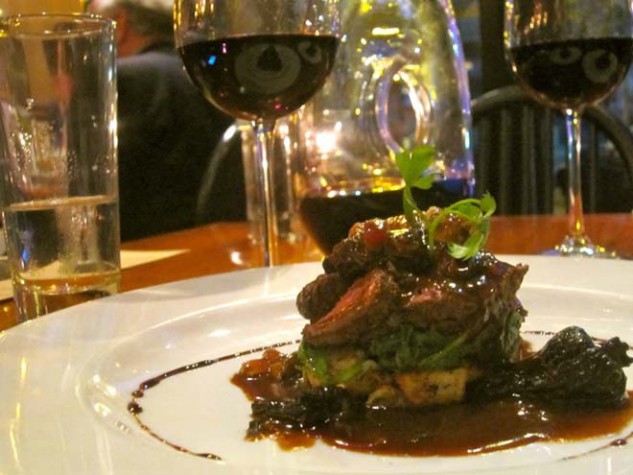 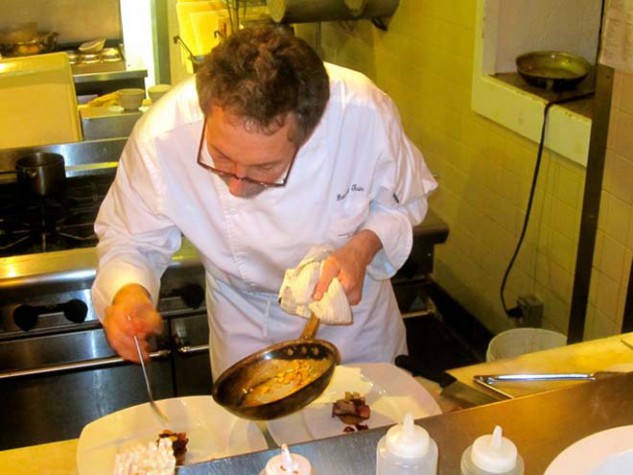 May, 2012 By: Joe Ricchio
Location: Portland

David’s in Monument Square continues to evolve and keeps getting better.

Entering into his 20th year of operation in Portland, it is quite refreshing to see chef David Turin still having fun behind the line.

Though his second restaurant, David’s 388 in South Portland, has been quite successful and receiving great press as of late, I am interested to see how the cuisine at the original Monument Square location has developed over the years. I arrange for a tasting menu, and, because a restaurant’s beverage program should also progress with the food, appropriate drink pairings.

The open, inviting dining room at David’s is busy on a random Monday night, and my dining companion and I are seated in the corner by the large front window, with a clear view of both the kitchen and the man in Monument Square proudly hoisting a “Jesus is Lord” sign on the other.

Upon arrival, our table is already set up with plates of olive oil, thyme, and balsamic vinegar, as well as a basket of warm garlic knots. These dense, buttery rolls are actually the house pizza dough that have been baked with garlic and herbs, and though they are perfectly delicious on their own, I see no reason not to dip them in the oil and vinegar blend for extra flavor.

Bar manager Patrick Morang is in charge of both our service and pairings this evening. I order a glass of Don Julio Silver tequila on the rocks to sip while I examine the menu that Turin has created for us. During my initial conversation with Morang, I notice that I am receiving somewhat of a hairy eyeball from an elderly diner at a neighboring table, but think nothing of it. When he returns shortly after with our first pairing, a glass of Ozeki Osakaya “Chobei” daiginjo sake from the Hyogo prefecture in Japan, we begin to enthusiastically discuss an upcoming Champagne dinner at the restaurant. Bear in mind that I’ve known Morang for a while, and when the two of us get going it can be a bit of a “wall of noise.” This prompts the elderly man to whirl around in his chair, and sternly announce “he can’t even hear himself think over here with us talking.” The three of us, shocked at this person’s sense of entitlement, stare blankly at him, and as he turns back to his table I inform Morang that I do not plan on getting any quieter from this point on, but will play nice long enough for this guy to have a few drinks and relax.

Back to business, though. The silky, ripe fruit characteristics of the sake are perfect with our first course, “Chips and Salsa.” This could definitely be considered one of Turin’s tried and true dishes. I’ve sampled it several times before, but the refreshing, sweet tuna tartare with capers, chili, scallion, and a hint of truffle oil is delicious every time, served with a crispy potato goufrette.

Next we are presented with a glass of Vigneto Saetti Rosato dell’Emilia, a beautiful, lightly sparkling rosé made from the Salamino di Santa Croce grape. This wine excites me very much, and its vivid flavors of cranberry, strawberry, and toasted almond marry brilliantly with each element of our second course, “Duck and Duck.” This dish combines tender seared magret duck breast, foie gras torchon, dried cranberry apple gastrique, and Turin’s own duck-infused honey on top of thickly cut brioche, and can only be described as an outrageously decadent PB&J. Luckily, portion sizes have been controlled so as to not completely overwhelm us this early in the experience.

I glance over at the neighboring table, and it would appear that peace has been established. Turin appears bearing the next dish in our progression. It is a fresh, sweet lobster tail that has been delicately poached in apple and leek butter, served alongside spring pea risotto, with a pea tendril and apple slaw to add a pleasant crunch. The tart, lively acidity and lemon-grapefruit flavors of the Lucien Crochet Sancerre effortlessly cut through the richness of the buttery lobster, making for yet another very successful pairing.

At this stage in the meal, our wine stems are replaced with hefty beer goblets and filled with a liberal amount of the Dogfish Head Saison du Buffale brewed with parsley, rosemary, thyme, and sage. It is the result of collaboration between Delaware’s Dogfish Head, California’s Stone Brewing, and Victory Brewing of Pennsylvania, who originally formed the BUFF Alliance (Brewers United for Freedom of Flavor) in 2003. The pronounced herbal notes of this medium bodied saison lend themselves perfectly to the celebration of chicken that is our fourth course. Tender breast meat rests in a pool of Madeira buerre monté, with a lightly truffled root vegetable and bacon hash on the side. A pair of wings also adorns the plate, lightly seasoned with skin crisped to perfection, reminding me very much of the Chinese preparation style.

I observe Morang decanting a red wine as we enjoy our intermezzo course, a palate cleanser of raspberry apple slush that has been “garnished” with a noticeable amount of frozen basil vodka. I like that the liquor makes the slush less sweet, and eases the transition from beer back to wine. Conversely, my companion expresses that the boozy element of this dish may be “getting her a bit tipsy” in addition to delivering a mildly painful ice-cream headache if consumed too quickly.

While she weathers the storm of the intermezzo, Morang and I discuss the next pairing, which has been resting in a decanter for about 30 minutes. The Bodega Ranacer “Enamore” from Mendoza, Argentina, is a monstrous, oaky red with notes of plum and raisins that result from drying the grapes in the same manner used to produce Amarone in the Veneto.

This is spot-on with our roasted beef tenderloin, cooked medium rare and draped with an intense and velvety foie gras bordelaise sauce. And because once you’ve gone this far, there’s no reason to hold back; a few plump, earthy morel mushrooms have been added to the plate as well. I take my time with this dish, and inform Morang that we may need a brief intermission to relax and enjoy the wine before proceeding to the next course.

To finish, we are poured a glass of the Vergano Manro “Luli,” a vermouth-like wine called chinato that has been produced from Moscato D’Asti grapes. It has beautiful and haunting essences of vanilla, cinnamon, and orange peel, with a nice bitter characteristic that seems to ease my full stomach. Dessert is a flaky, buttery pizzetta topped with pears, orange zest, and a sprig of rosemary, with a dollop of toasted almond ice cream on the side. All elements are working in harmony here, and after finishing and enjoying a sampling of chocolate truffles we retire to the bar for a few more cocktails as the dining room winds down. I am feeling very, very satisfied.

Though the restaurant prefers a three-day notice for reservations involving tasting menus, it is well worth planning ahead. Pairings, on the other hand, are available on any given night, as are larger versions of most of the dishes I have enjoyed on this visit. And then the people-watching in Monument Square is always a good time…