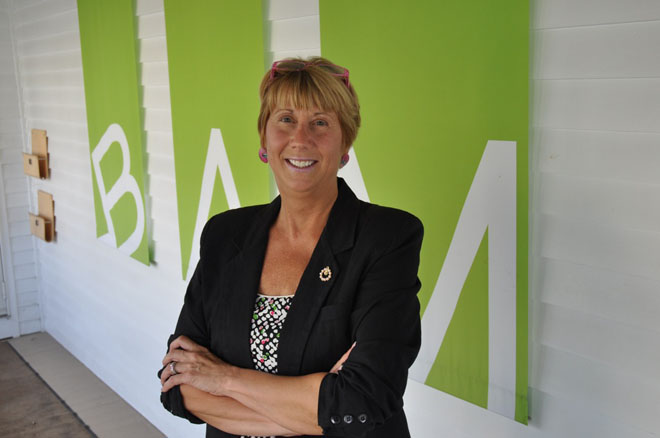 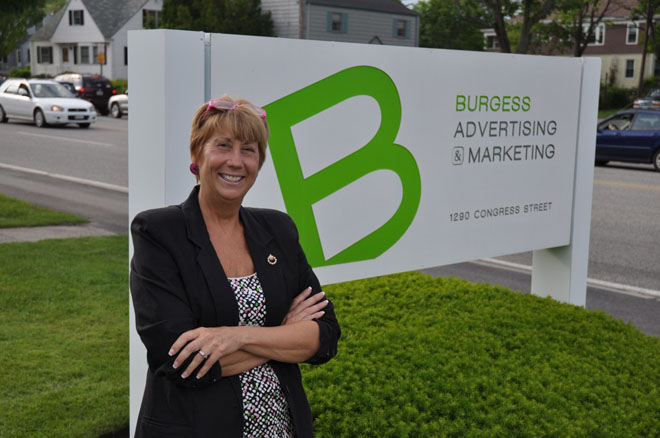 What’s your connection to Maine?
I grew up in Camden. Life was great. We were always out on the water. We’d have everything packed in the boat and be gone by noon on Saturday, spending the night somewhere in Penobscot Bay. We had a Sunday morning ritual: we’d eat steak and eggs and listen to the fishermen off Cape Ann on the radio. I went to the University of Maine in Orono. My degree is in natural resource management, with a minor in soil science.

How did you find your way into that major?
I sort of meandered around college disciplines. Had some writing. Had some soil science, entomology, and political science. I wanted to get my masters and to do research in Antarctica, but they wouldn’t let me—it was the 70s, and they didn’t quite know what to do with women yet. So I got married instead and ended up in Boston. I needed a job, and, not quite knowing what to do, I ended up applying to work at McDonalds to pay the bills.

What was your role at McDonalds?
Well, I couldn’t get hired at first. The manager said he thought I’d make a fine hostess but he didn’t have the authority to hire me. I had to come back and meet another woman. After she hired me, I asked her what she did, and she said, “I have the greatest job on the planet. I have five different McDonalds that I service. I hire and train the hostesses, but I also work with their Boston and Chicago advertising agencies, I work with the research firms for McDonalds.” I said I thought that sounded fabulous and she said, “Oh my gosh, do you want to do that?” They interviewed me an hour later and hired me on the spot. My head was spinning. They flew me out to Chicago; I worked with all of these ad agencies, and was part of the various promotions. I feel like I got my masters in marketing from McDonalds. Life is full of 90-degree turns. You’re going down a path, and you make a single decision, and all of a sudden you’re headed in an entirely different direction. Walking away from a Masters degree, going to Boston and working for McDonalds Corporation put me on a completely different path. Everything happens the way it’s supposed to. I really believe that.

How did you find your way back to Maine?
McDonald’s transferred me to their ad agency that serviced the Maine McDonald’s restaurants, where I worked for another five or six years. Eventually the agency went through an ownership change and I found myself without a place to be. You know, you never think you’re old enough, smart enough, or ready to start a business. At least, that’s how I felt. I was 29 or 30 when I did it. Burgess, Brewer, Stanyon & Payne, Inc. incorporated in December of 1986. It was a wild fantastic ride. We rocked it until 1990 when everything in this marketplace went to hell in a hand basket. I eventually bought my partners out. Burgess Advertising & Marketing just passed its 25th year.

For the past six years, you’ve served the people of Chebeague Island, Cumberland, Long Island and part of North Yarmouth, in the Maine House of Representatives. How did you get in to politics?
I was always interested in politics. In Knox County, everybody was very encouraging of younger folks being involved. I actually was the committeewoman from Knox County on the Republican state committee in the mid-70s, when I was a student in Orono. My great-grandfather and my great-great-grandfather were in the Maine legislature and I always thought, “Some day I’ll do that.” Again, you never think you’re old enough, smart enough, or ready to run for office. I ran, and I won. I’ve served three terms now, and this will be my last. I’m a moderate “Maine Republican.” To me, what it means to be a Maine Republican is to be practical and common sensical. To listen and do the right thing for the constituency, the time period, and for the greater good. That’s what I’ve tried to do.

I understand that you are a breast cancer survivor and have worked to raise awareness and funds through the Maine Cancer Foundation. Can you tell us about the work you’ve done with MCF?
I was diagnosed with breast cancer in 1999. I was 42, just turning 43. I had my three kiddos, and, for a variety of reasons, my husband and I were in the process of getting a divorce. Just as the divorce was finalized, I started this year-and-a-half year odyssey in the medical world. I explain to people that when you have cancer it’s kind of like living two lives that run parallel to each other—one everyday life and the other my cancer life. Every now and then they touch, and then they pull apart. Everything that could go wrong went wrong—I went through 17 different surgeries and procedures—but the bottom line is I’m still here. At the end, and when I came back to work, I just felt like, “this cancer thing needs to stop.” We’ve been making plans, and putting on events, and fundraisers to do that. I found this home grown, Maine-based organization called the Maine Cancer Foundation. We created the first annual Cure Breast Cancer for ME Luncheon in 2002 and we have raised over a million dollars from this event alone over the years. Another cool fundraiser was the creation of the Maine Pink Ribbon cancer specialty plates. I want to say there are about 19,000 license plates on the road, which has raised over $542,000 for Maine based breast cancer organizations. And we are working on creating a pink plate for motorcycles as well but we need 500 reservations before the State will make the plate (Go to mainecancer.org to order one).

Through all the 90-degree angles, what has always been true about you?
I’m stubborn. I have a drive, and a desire to make a difference. It’s the piece that keeps me honest. The integrity piece is very important to me as a person. The tenors of the political conversations that are out there right now are so destructive. It needs to stop. Your ethics, and your morals: these are all that we have at the end of the day. The rest of the stuff is just window dressing.