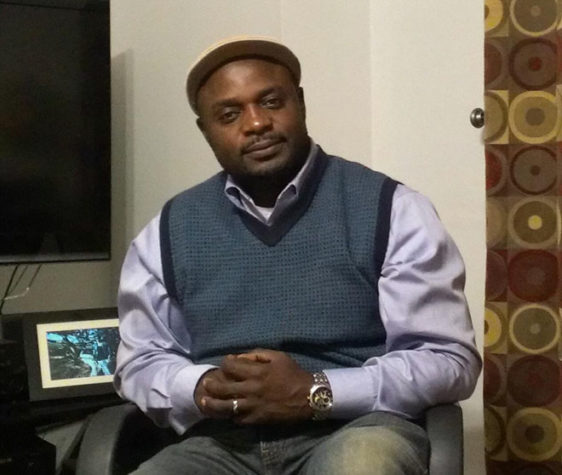 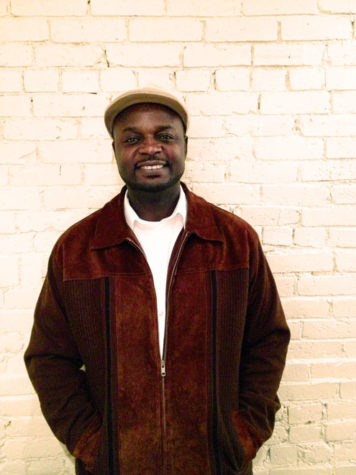 Where did you grow up?
In the Congo, but not really in one place. It’s a long story. When my mom was eight months pregnant with me she and my father had a fight, and she took refuge to my grandfather’s village, where I was born weeks later. Eventually my mom and dad reconciled, but after eight or nine years they decided that enough was enough and divorced. I moved out of the village, and lived in the street for quite some time, until my grandfather came and took me back to my village.

How did you survive on the street?
In my country, and in many parts of Africa, you can start a business from nothing. So I started buying packets of candy from the Indian shopsthe wholesale shopsand selling them at street corners. From there, I developed a street kiosk like the guys you see with lobster rolls in Portland. I was successful. By the time I came to Maine, I had my own building, employed 16 people, and was going out of the country a lot to buy goods for my shop.

Why did you move to Maine and what were your first experiences here?
[My wife and I] heard that there were Congolese here. Of course, the first night we were here we didn’t find anyone. In some ways, my village is similar to America. I was surprised. In my village, when we receive a new visitor who wants to stay with us, the first year the community will help him. They will give him a field. The chief of the village will provide seeds for him, so that when the harvest comes he’s got enough food for himself. During that year, the community will make sure he has enough food for his family. When harvest comes, he needs to manage his food and manage the seeds for the next year so that the next season he’s all set. If we have new visitors, he has an obligation to help them as well. In America we have welfare and we have city assistance. When I came to Portland, I was at a shelter for a week or so. The city of Portland helped me get an apartment. While I was waiting for my immigration papers, Immigrant Legal Advocacy Project came and helped me. They introduced me to this beautiful family of lawyers, Mr. and Mrs. O’Keefe. They just met me and they had it in their hearts. So many people helped me, and it’s because they want to make the community better.

How did you learn English?
My communication was really bad. Even now, I feel I have a long way to go. You can’t be perfect because of the accentit will stay with me.

I can understand perfectly!
Now you can. When I first came, some had a hard time understanding me, and referred me to Portland Adult Education for English as a Second Language. So I learned English there, and Robert Wood, the director of Portland Adult Education, helped me get my GED in 2004. Teachers from Portland Adult Education introduced me to SMCC, but you have to take the entrance exam. I failed that exam three times, but I didn’t give up. The fourth time I passed, and was enrolled at SMCC where I spent two years. I graduated in 2006 with an Associate’s degree in HVAC. From there, I transferred to the University of Southern Maine School of Engineering and Technology Management and graduated in 2009 with my bachelor’s degree. That year I enrolled at the Muskie School of Public Service and graduated in 2011 with a degree in public health management.

What have you learned about yourself through your experience in higher education?
School shaped me to have a desire to work for the people. I’m trying to see how I can inspire others in the community not to look at the negatives, but to look at their lives in a positive way, to shape them to be a good people. I don’t have money, but I have time to volunteer.

It’s pretty amazing that you find time to volunteer, considering your obligations to your work, your graduate work, and your family.
Taking full-time classes at the graduate level, working nights, and parenting four kids, and volunteering with Red Cross, Habitat for Humanity, the City of Portland, and United Way of Greater Portland. I even volunteer at Maine Medical Center where I work. It’s really difficult, but I only have limited time. I treasure my time. There will be a day when I won’t have the strength, but I will at least be able to look back and know that I inspired someone.

Do you like living in Portland?
I see other places on television, but the only city I know in America is Portland. I believe through my faith that you have to make the place you live better. That’s what I’ve been trying to do for my community by volunteering, advocating. Why should I leave Portland? I want to keep my kids here, and to give them the love that I missed out on myself. I want to inspire them to be good people in this community. If they want to leave when they grow up, that’s fine. But as for me? I’m rooted here.