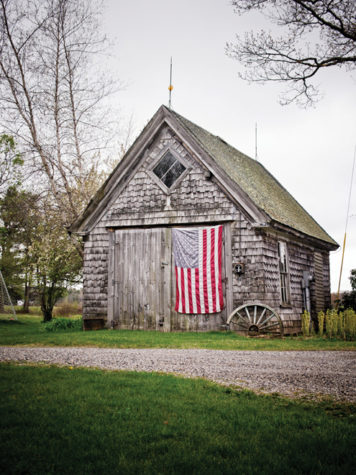 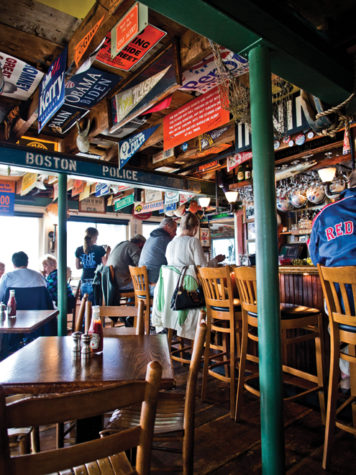 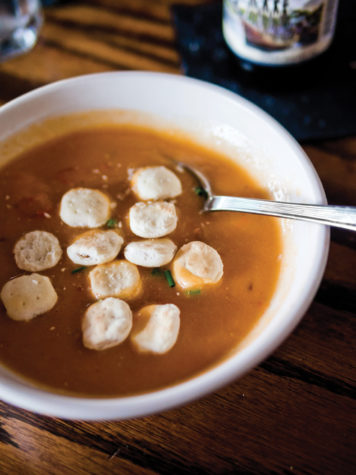 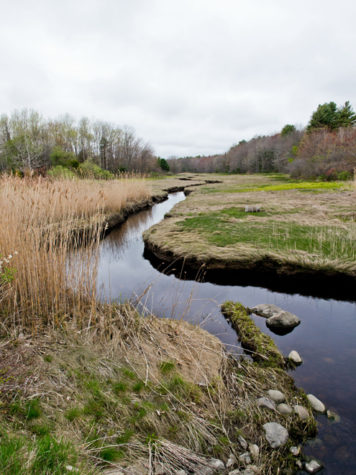 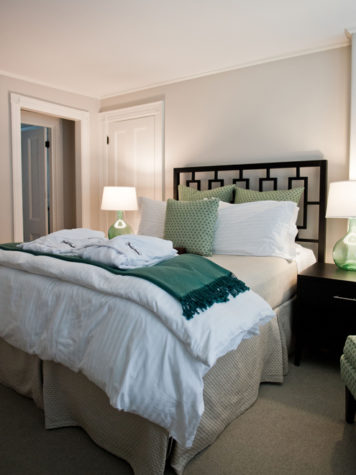 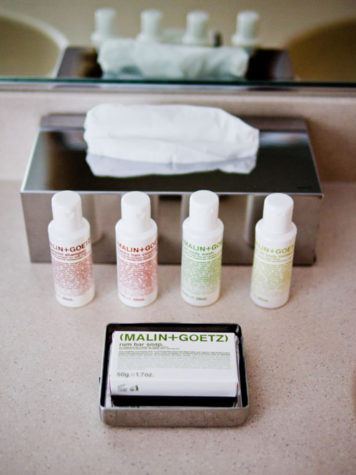 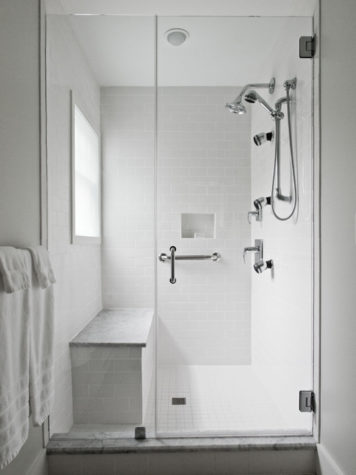 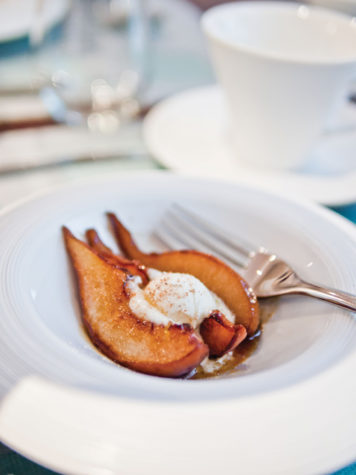 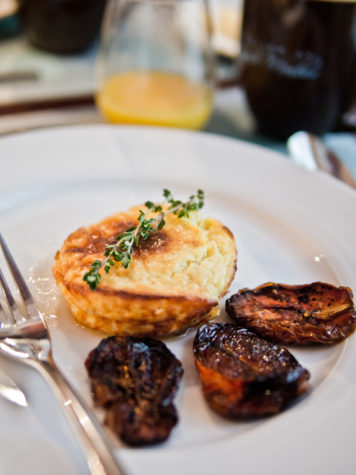 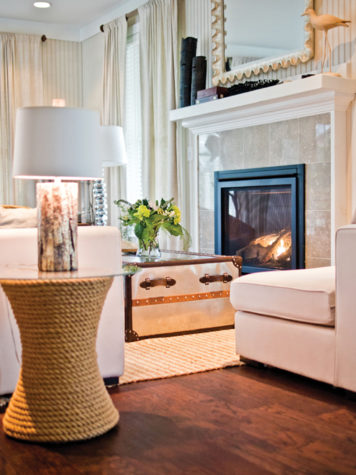 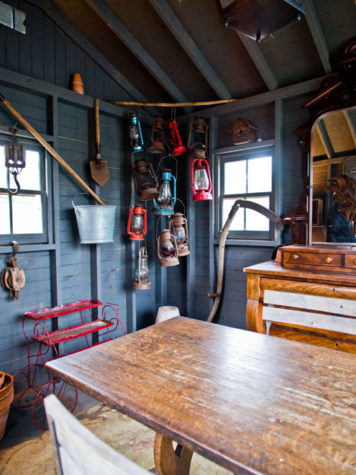 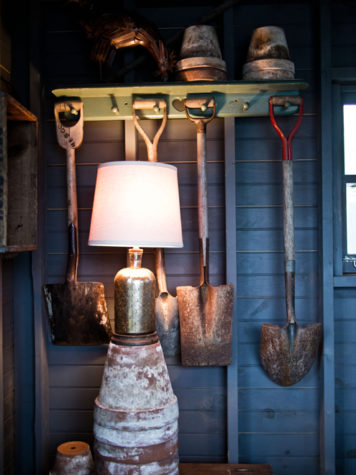 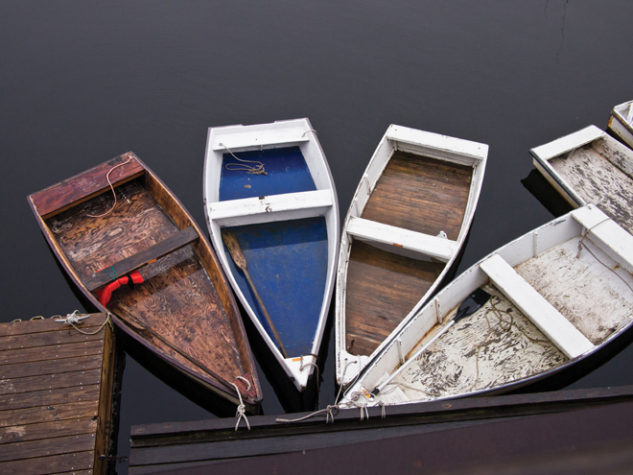 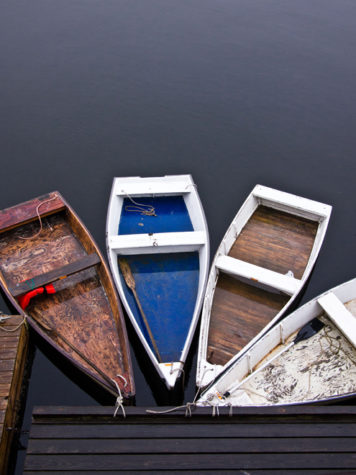 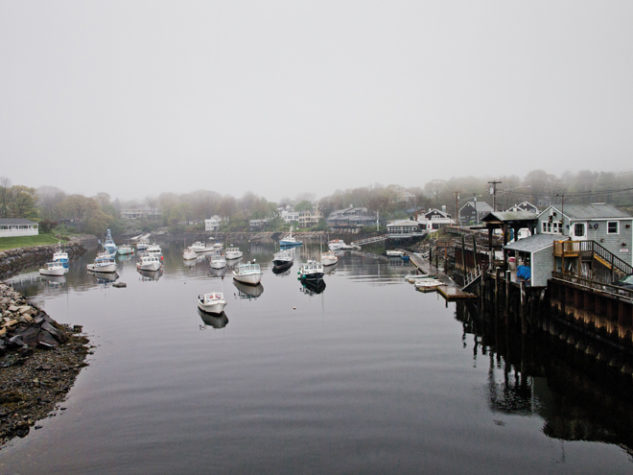 Tucked in for fireside drinks and dinner in York Harbor at the Ship's Cellar Pub. 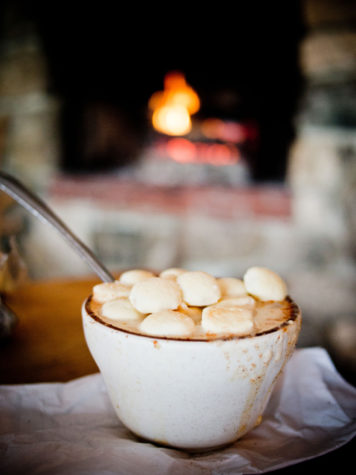 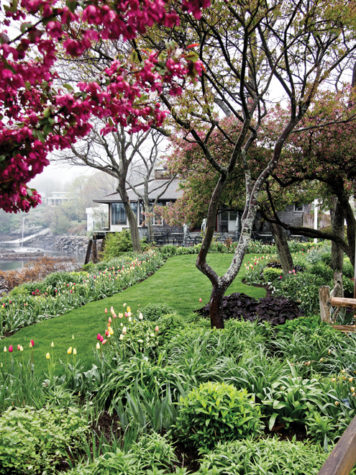 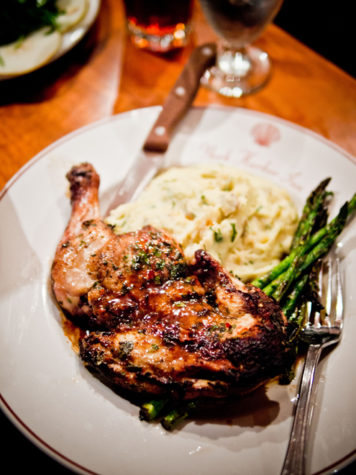 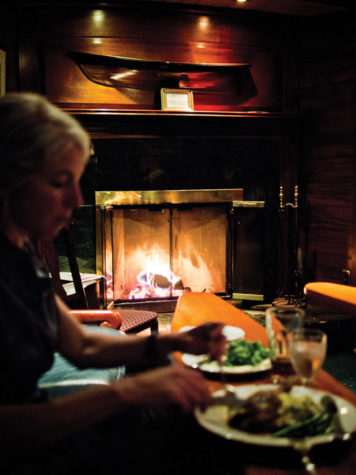 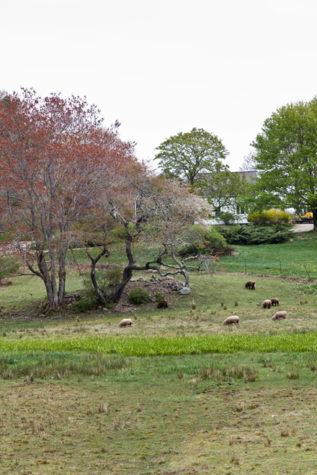 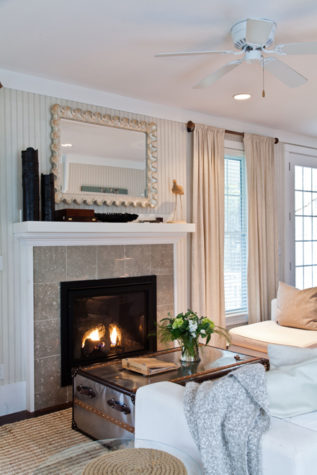 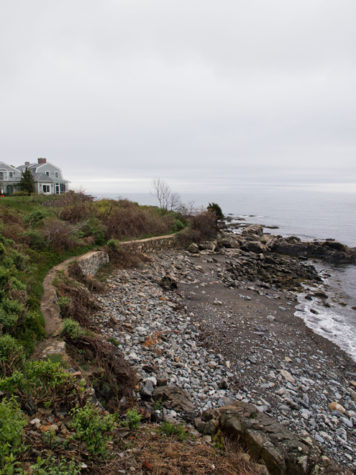 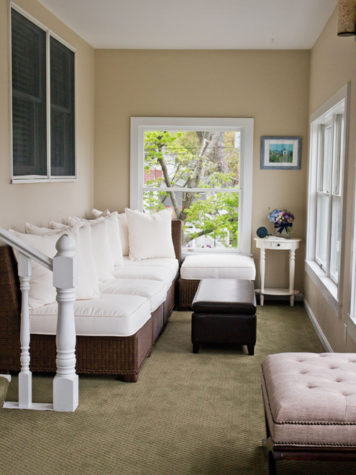 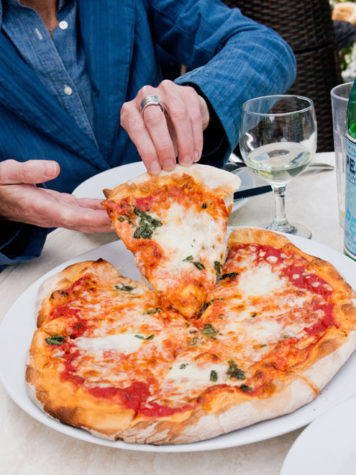 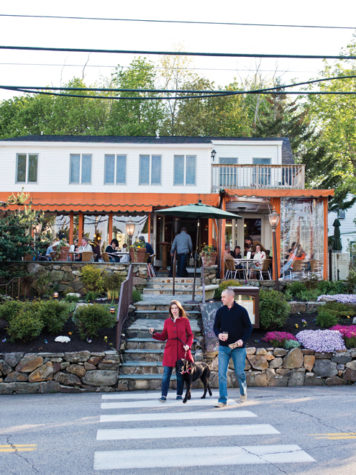 The terraced garden and patio tables at Caffe Prego on Shore Road, Ogunquit 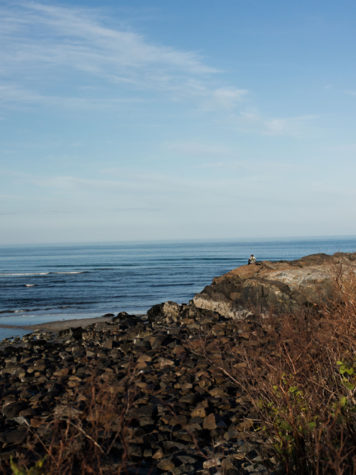 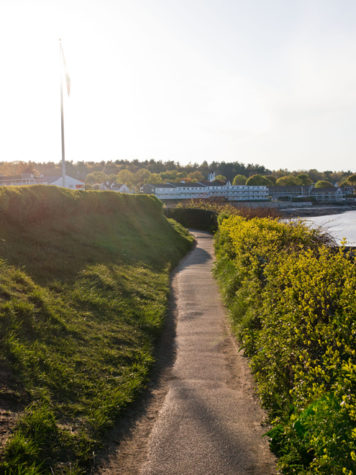 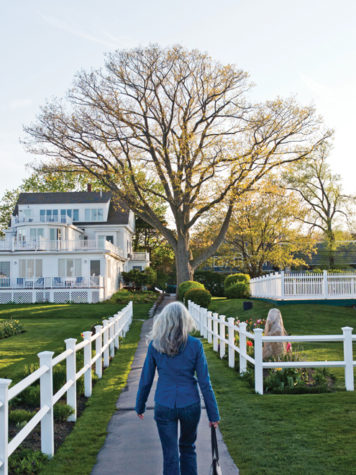 Paths to the seaside are easy to find in Ogunquit.

The ground and trees are bursting with green, and the damp chill of fog is moving through the scenery on the drive south into York County. Before summertime tourists arrive, we set out to greet the spring.

We’re getting close to Kennebunkport, a village well-trodden by presidents and the second-home crowd of New Yorkers and Bostonians. But all is calm on this springtime Thursday. April has just turned to May, and on the two-lane roads near the coves and capes of Kennebunk, we pass few other cars as I look past the dashboard to wildflower-scattered meadows and flag-draped barns. On other Maine escapes, we often stay in a tiny cabin a couple hours to the north that photographer Peter Frank Edwards bought several years ago. For this trip, we’ve instead driven south of Portland looking for a getaway—three inns in three nights. It’s my grand idea for a between-season change of pace. Maine is greening up; the whole state is easing out of winter hibernation. We are, too—and we’re ready to go somewhere, anywhere. Peter Frank is driving. I compose a text to a friend who grew up nearby: “In Kennebunkport. Hungry. Where to?” She answers in seconds. “The Ramp @ Cape Porpoise.”

So, that’s how we start our weekend, tucking into hot cups of buttery lobster bisque, a plate of golden-battered fish and chips, and pints of beer served under the fish nets and batting helmets that line the overhead beams of the Ramp Bar and Grill at the water’s edge. A guy in a Red Sox jacket sits at the bar. Political stickers from Romney (the father’s 1968 presidential run) to Obama are mixed in with sports memorabilia. Lobster boats are moored within a few dozen yards of our seats. And there isn’t a summer crowd in sight.

From the outside, the first inn looks like a large and handsome New England home, and it is one, dating to the 1860s. But inside, the decor of the Inn at English Meadows is surprisingly spare and modern. No clutter here. Creams and whites dominate, with a color or two mixed into each room—sometimes a soft plaid or a deep blue. Showing us around the upstairs bedrooms, innkeeper Liz Brodar demonstrates how to turn on a shoulder-height fireplace that’s embedded in the wall like a framed piece of art. I feel the soft wool rugs at my feet, and reach out to touch one of the plush bathrobes that is folded and ready for use on the bed. I’m worn out from the workweek and drive, and could probably sleep well in a flannel sack. But I’m ready to jump right in to one of the inn beds when Liz mentions that she special-orders the yards and yards of deep bedding from Italian textile house Frette.

We walk a few blocks that night to see the neighborhood, stopping in at the wood-framed Old Vines Wine Bar, and checking out the new lane of brightly painted art galleries and shops set to open that weekend right next door to the inn. (The Galleries at Morning Walk have since proved to be a great place to visit with artists and shop for original art and jewelry.) But I don’t want to stay out for long in the cool night. I’m feeling the pull of the inn’s fireplaces, and I remember seeing a bedside sample of Jacques Torres chocolates. We can always do more exploring in the light of morning.

Spring rain is drizzling outside the next day when we sit in a daylight-filled downstairs dining room for a delicious breakfast, including an omelet with pancetta and roasted tomatoes. The only guests in the nine-room inn that morning, we end up in the kitchen for a long, fun conversation with the innkeepers. I want to know more about the house. Liz and her husband, Eric, explain that it was once a farmhouse with an attached barn, and has been open for guest lodging for more than 75 years. (Guestroom choices include the former tack room and hayloft.) With no innkeeping experience, but an interest in entertaining and cooking, the couple bought the historic house in 2010. Eric describes the style of furnishings at that time as “your grandmother’s, grandmother’s attic.” And Liz says they immediately removed all the “dark wallpaper, furniture, lace curtains, and doilies—two full truckloads went straight to Goodwill.”

The Brodars previously lived and worked in Manhattan. They sold their house in the Hamptons after they visited southern Maine and felt an instant attraction to the scenery and sensibilities. “There’s huge money here, too,” Liz says about Kennebunk, “but it’s quiet. People here drive beat-up station wagons. In the Hamptons, they’d be in Ferraris and Porsches.”

Speaking of cars, we’ve got travel plans for the day, and soon pack up and start driving (a four-door, not a Ferrari). First stop is Hidden Pond in Kennebunkport, which isn’t open for the season yet (it opens in early May), but the staff there say we can look around the woodland-style resort—known for its nightly bonfires and dinners at the open-air restaurant, Earth. I’m interested in the bungalow lodging, and on a wooded lane near Earth, we step inside one that’s open. Imagine a rustic cabin that’s had a hip, luxury makeover, and that’s what the retreat cottages are like—with fireplaces, fluffy beds, and spa soaps and shampoos. Yet the resort hasn’t lost its focus on natural elements, from collected seashells and pinecones, to antlers on the wall. I could definitely bunk here sometime.

After cruising southward on Route 1 toward Ogunquit, soon we’re pulling up to Perkins Cove, and particularly, Barnacle Billy’s. The iconic seafood house has been open to diners for more than 50 years, and it’s traditional to sit by the fireplace with a rum punch. I’m skeptical that on this damp, chilled-to-the-core afternoon there will be much punch-drinking. But after we order cups of steaming clam chowder and tear open the packs of oyster crackers, I notice that, sure enough, near the two fireplaces in the long waterfront dining room, guests are sipping from large plastic cups of iced rum punch. A man at the next table lifts his cocktail with the slices of pineapple and orange hung on the rim. “It’s my first of the season,” he says, with a nod and smile. “And it won’t be my last.”

While a rummy afternoon is tempting, we decide to return to the misty, gray-sky coastline for a some more motor touring, this time following the winding Shore Road between Ogunquit and York Harbor. I hear foghorns when we walk out toward Nubble Light in York, and then carefully step across the damp granite ledges to order a hot fudge sundae at Brown’s “Old Fashion” Ice Cream.

For night two of this southern tour, we’ll stay at the York Harbor Inn, and we check in to a second-story oceanview room with grass-green walls, heated floors in the bathroom, and a cocktail table and wingback chairs by the wide window. A grassy park on a bluff, and pathways to the shore-hugging Cliff Walk and Harbor Beach, are just across the street. Before dark, we pull on hats and coats and walk along the rocky path that skirts the waterfront side of large, historic homes in this colonial-era town with a history dating back to the 1600s. Yellow buttercups and pink sea-spray roses are growing wildly along the path.

Back at the inn, we follow the buzz of music and conversation into the Ship’s Cellar Pub, built to suggest the nautical lines and ship cabinetry of the belly of a fine boat. With a front door and glowing lamplight at street level on Route 1A, the place is lively and packed on this Friday night—nearly every booth, table, and stool is filled, and a man with an acoustic guitar is playing near the bar, singing “The Long and Winding Road.” The hostess suggests we wait for a table at one of the long benches near the fireplace. The hearth is at the end of a room that’s narrow and wood-paneled like a ship’s cabin. It’s the coziest alcove of the trip. We slide into empty seats and decide immediately that we’ll stay right there for dinner. I love a hearty tavern menu, and our order of rocket and apple salad with local goat cheese, hot mashed potatoes, and chicken roasted under the weight of a brick, ends up being just right for a fireside meal. We’ll sleep well.

Inn life is suiting me just fine by the third day and night, when we’re set to move on from history-rich York Harbor and drive back up to Ogunquit’s colorful cafes and shops. Finally, the sun is out. The village atmosphere is good for a stroll, and we park and walk as soon as possible. In one direction, we follow the Marginal Way path back toward Perkins Cove, and in the other direction is sandy Ogunquit Beach. The boardwalks and paths are good for people-watching, and we stop to watch a man skimming across the water on a paddleboard.

Parsons Post House, the three-story on Shore Road with the green awnings and bright pink front door, is where we’ll stay tonight. Offering lodging since 1965, the guest rooms and suites—including a penthouse— have been revamped and modernized into beach chic by the new, young owners. Sunflowers and hydrangeas fill vases on the sun porches, and local art is hung along the walls of the wide hallways. Walls and furnishings are in beige, white, and pale blue.

Innkeeper Laura Magliochetti, who is in her mid-20s, is standing on the porch near a cooler of ice water with lemon wedges, and a tray of cookies she just baked. Gone are “a ton of dark woods and floral prints,” she explains. Instead, she says that she and her younger sister wanted the inn to have a more sophisticated style “that’s clean and comfortable, so people can make it their own space.” When they were growing up in Massachusetts, the sisters got to know Kennebunk and Ogunquit during family vacations, and they bought the place in 2011. “We said, ‘why not do this?’” recalls Laura. “I don’t think we knew how much work it would take.”

For an early dinner, Peter Frank and I make our way a few doors down from the inn to what is obviously another labor of love, Caffe Prego. Sitting at a cafe table on the terraced patio (space heaters keep things toasty), we chat with owner Donato Tramuto, and I overhear other Italian-speaking staff. We consider the menu from zuppes to machiatos, and for a while, our Maine day is filled with Italian flavors. In no hurry, we order and taste tender, braised veal and beef tortellini, thin slices of margherita pizza, and cups of pistachio gelato.

That night and in the morning, we walk and drive along the southern shoreline some more before we have to leave these small towns by the sea. Before we go, from one of the paths in Ogunquit, I notice a woman wrapped in a blanket far out on the rocks overlooking the saltwater. In the warmth of the sunlight, she’s reading, or maybe just watching the horizon. I’m reminded then of something Laura from the Parsons Post House told me about what she’s hoping to achieve at their inn. “We really want simple abundance,” she said.